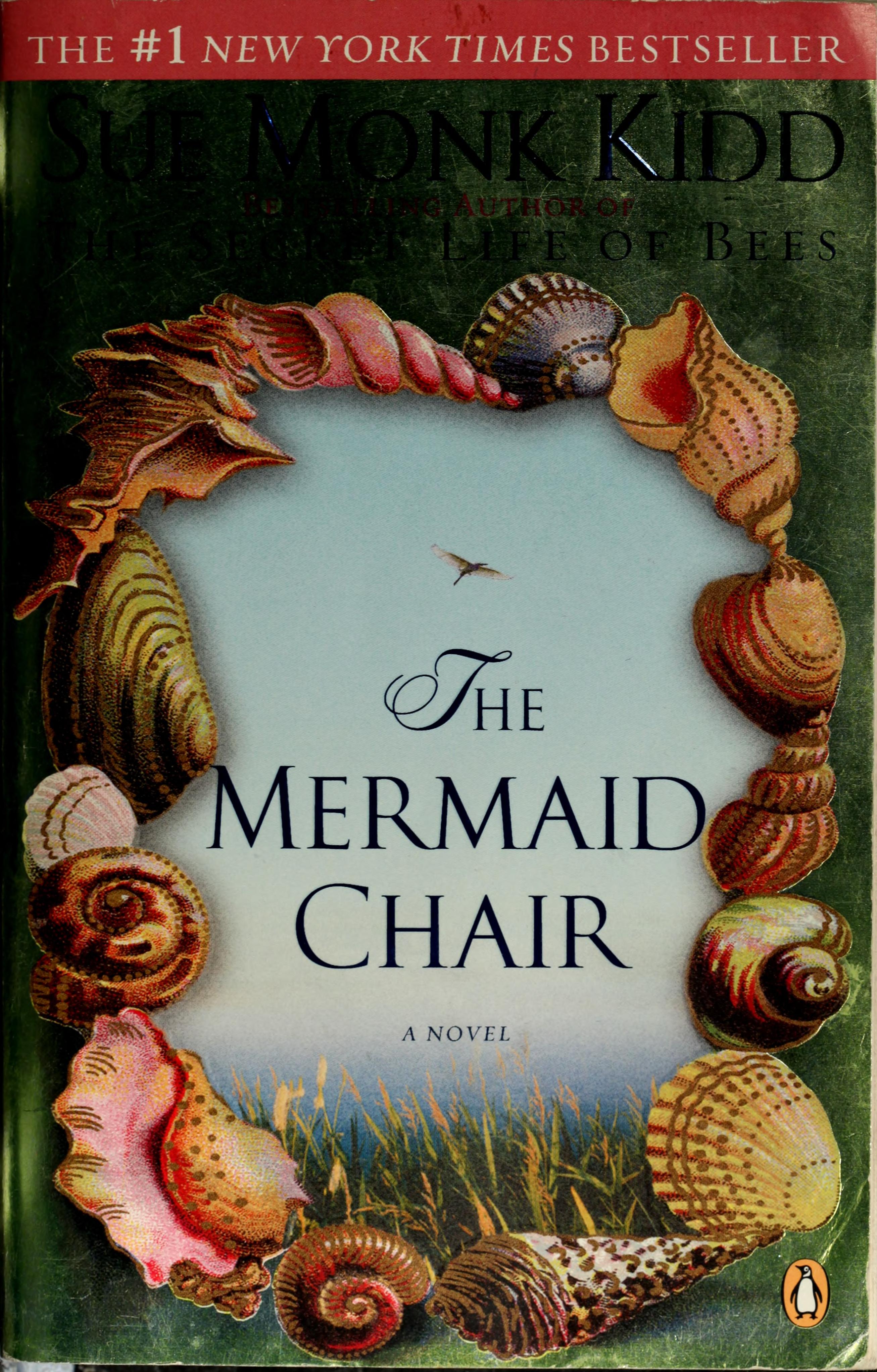 In her remarkable follow-up to the widely acclaimed The Secret Life of Bees, Sue Monk Kidd tells a beautiful and haunting story centered around forty-two-year-old Jessie Sullivan, a woman in quiet crisis whose return home to the island of a mermaid saint becomes a pilgrimage to self-awakening. In this powerful exploration of mid-life marriage and the intersection of the spiritual and the erotic in the feminine soul, Kidd illustrates the sacredness of belonging to oneself and the healing mercy of love and forgiveness. Jessie’s journey begins in the winter of 1988 when she receives an early-morning call from her mother Nelle’s close friend Kat.

In her remarkable follow-up to the widely acclaimed The Secret Life of Bees, Sue Monk Kidd tells a beautiful and haunting story centered around forty-two-year-old Jessie Sullivan, a woman in quiet crisis whose return home to the island of a mermaid saint becomes a pilgrimage to self-awakening. In this powerful exploration of mid-life marriage and the intersection of the spiritual and the erotic in the feminine soul, Kidd illustrates the sacredness of belonging to oneself and the healing mercy of love and forgiveness. Jessie’s journey begins in the winter of 1988 when she receives an early-morning call from her mother Nelle’s close friend Kat. Nelle has inexplicably and deliberately severed her own finger and Kat is calling to ask Jessie to return home to Egret Island, South Carolina, to care for her. Though Jessie has been somewhat estranged from her mother for the last five years, she departs immediately—realizing that despite the disturbing circumstances awaiting her, she feels relief in leaving and having some time away from her husband, Hugh, a psychiatrist. Jessie loves Hugh, but twenty years into their picture-perfect marriage, with their only child away at college, she has begun to feel a groundswell of restlessness or, as she puts it, “the feeling of time passing, of being postponed, pent up.” Understanding herself primarily through her relationship to her husband and to her daughter, she is baffled by her discontent, by her sudden resistance to creating her small “art boxes” that have been her only tenuous link to the passion she once had to be an artist. She has lost “the little river of sparks” that runs through life, but mostly she has lost her deep connection to herself. Once on Egret Island, Jessie finds herself ill equipped to handle her mother’s continuing erratic behavior, much less to comprehend what lies behind her enigmatic act of self-violence. She senses that it’s related to her father’s death—a death that is still surrounded by unanswered questions thirty years later. As she tries to piece together Nelle’s tormented past, Jessie reconnects with the two women who, along with her mother, once formed an inseparable female trio, bound together by rituals and secrets only they shared. When Jessie finally discovers the truth about Nelle and her father’s death, it unlocks a dark, painful secret. Its revelation, however, will begin to heal the relationships in both women’s lives. Near Nelle’s home is a Benedictine monastery that houses a mysterious and beautiful chair carved with mermaids and dedicated to Saint Senara, who, legend says, was a mermaid before her conversion. The abbey and the chair have always been special to Jessie. There, she meets Whit, a junior monk who sought refuge at the monastery after suffering a devastating loss. Only months away from taking his final vows, he isn’t completely certain whether he has come to the abbey in search of God or in search of immunity from life. Jessie’s powerful attraction to Whit awakens an immense sexual and spiritual longing inside her, as well as a pulsing new sense of aliveness. Amid the seductive salt marshes and tidal creeks of the island, she abandons herself to the long-buried passions of her body and the yearnings of her creative spirit and embarks upon a descent into her own uncharted and shadowy depths in search of a place inside herself that is truly her own. Torn between the force of her desire and her enduring marriage, Jessie grapples with excruciating choices, ultimately creating a “marriage” with herself. In this novel Kidd takes on the darker, more complex elements of the psyche and human relationships—spiritual emptiness, infidelity, death, mental illness and euthanasia—with a steady gaze and compassion not often found in modern fiction. Above all, The Mermaid Chair is a book that embraces the sensual pull of the mermaid and the divine pull of the saint, the commitment to oneself and the commitment to a relationship—and their ability to thrive simultaneously in every woman’s soul. Kidd’s candid and redemptive portrayal of a woman lost in the “smallest spaces” of her life ultimately becomes both an affirmation of ordinary married love and the sacredness of always saving a part of your soul for yourself.

Sue Monk Kidd’s debut novel, The Secret Life of Bees, has sold more than 4,000,000 copies. She is also the author of several acclaimed memoirs and the recipient of numerous awards, including the Poets & Writers award. She lives near Charleston, South Carolina.

“Book clubs, start your engines…. [The Mermaid Chair] is a tapestry strengthened by bonds between women that bridge pain and loss.” –USA Today

“The pages all but turn themselves.” –Parade

“Soulful in its probing of the human heart.” —San Francisco Chronicle

How does a woman like Jessie become “molded to the smallest space possible”? What signs might appear in her life? What did Jessie mean when she said part of the problem was her chronic inability to astonish herself?

Jessie comes to believe that an essential problem in her marriage is not that she and Hugh have grown apart, but that they have grown “too much together.” What do you think she means by that? How important is it for Jessie to find her “solitude of being”? How does a woman balance apartness and togetherness in a relationship?

How would you describe Nelle before and after her husband’s death? What is your interpretation of the mysterious factors that led her to cut off her finger? What do her fingers symbolize? How does the myth of Sedna—the Inuit mermaid whose severed fingers became the first sea creatures—shed light on Nelle’s state of mind?

Jessie feels that she has found a soul mate in Whit. Do you find this word inviting or repellent? When we speak of looking for a soul mate, what do we mean? Is there really such a thing?

Why do you think Whit came to the monastery? Would you describe him as having a crisis of faith? In what ways does he vacillate between falling into life and transcending it? What do you think of his decision at the end about whether to leave or to stay?

Islands are often places of personal trial and distillation of self––such as Shakespeare’s The Tempest or Fielding’s Lord of the Flies. What are the emotional islands upon which each character is stranded? What is the significance of the Egret Island setting? How does each character finally escape the island of his or her making? What does the trial on the enchanted island reveal about each character?

St. Senara only becomes a saint once an abbot hides her fish tail and prohibits her from returning to the sea. On one hand, she has lost her wild nature and freedom to swim away, but on the other hand, she has gained sainthood among the humans she has grown to love. What is the significance of this tale in Jessie’s life? When she leaves her husband to return to Egret Island, is she the wild mermaid or the stranded saint? How does the duality of the mermaid and the saint play out in women’s lives? Can a woman contain both? Why do you think mystics and poets have drawn comparisons between sensual delight and godly delight?

The mermaid chair is a central image in the novel. What does it symbolize? What role does it play in the novel? In Jessie’s life? In her father’s? How does it become a place of dying and rebirth for both of them, literally and figuratively?

Jessie breaks away from creating her tiny art boxes and begins to paint, finding her true gift. Why is she unable to take up her authentic creative life before this? What role do her paintings play in her metamorphosis? How does Jessie’s series of paintings of diving women reflect her own experience? What role does the motif of diving play in the novel?

The novel celebrates the hallowed bonds of women and suggests how a true community of women can become a maternal circle that nurtures a woman toward self-realization and helps her to give birth to a new life. How do Kat, Hepzibah, and even Benne play a role in Jessie’s transformation? What has been the importance of female communities in your own life?

In perhaps the most moving and cathartic moment in the novel, Jessie goes to Bone Yard beach and speaks vows of commitment to herself—”‘Jessie. I take you, Jessie . . . for better or worse . . . to love and to cherish.'” What does it mean to make a “marriage” to your self? Paradoxically, Jessie discovered that belonging to herself allowed her to belong more truly to Hugh. Does an inviolate commitment to oneself enhance one’s commitment to a relationship?

In your mind, was Jessie’s father’s death a sin? Jessie isn’t sure if choosing to end one’s life in order to spare oneself and one’s family extreme suffering was horning in on God’s territory and usurping “the terrifying power to say when,” or whether it was usurping God’s deep heart by laying down one’s life as a sacrifice. What do you think?

The Mermaid Chair suggests that a love affair may be a common response to a marriage that has lost its way, but that in the end it is not a solution. In what way do you think the novel is a cautionary tale? Why do you think Jessie is unable to heed the warnings from Kat and Hepzibah? How could Jessie have found awakening without betraying her marriage?

Upon her return home, Jessie says, “There would be no grand absolution, only forgiveness meted out in these precious sips. It would well up from Hugh’s heart in spoonfuls and he would feed it to me. And it would be enough.” Why does Jessie return to Hugh? Why is Hugh able to accept her back into his life? How has their relationship changed since she left for Egret Island? How has Jessie changed?