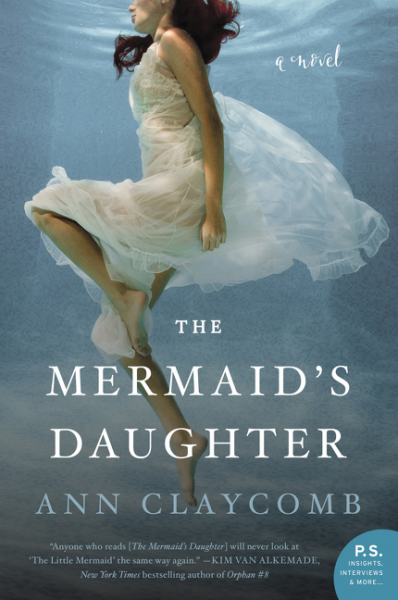 A modern-day expansion of Hans Christian Andersen’s The Little Mermaid, this unforgettable debut novel weaves a spellbinding tale of magic and the power of love as a descendent of the original mermaid fights the terrible price of saving herself from a curse that has affected generations of women in her family.

Kathleen has always been dramatic. She suffers from the bizarre malady of experiencing stabbing pain in her feet. On her sixteenth birthday, she woke screaming from the sensation that her tongue had been cut out. No doctor can find a medical explanation for her pain,

A modern-day expansion of Hans Christian Andersen’s The Little Mermaid, this unforgettable debut novel weaves a spellbinding tale of magic and the power of love as a descendent of the original mermaid fights the terrible price of saving herself from a curse that has affected generations of women in her family.

Kathleen has always been dramatic. She suffers from the bizarre malady of experiencing stabbing pain in her feet. On her sixteenth birthday, she woke screaming from the sensation that her tongue had been cut out. No doctor can find a medical explanation for her pain, and even the most powerful drugs have proven useless. Only the touch of seawater can ease her pain, and just temporarily at that.

Now Kathleen is a twenty-five-year-old opera student in Boston and shows immense promise as a soprano. Her girlfriend Harry, a mezzo in the same program, worries endlessly about Kathleen’s phantom pain and obsession with the sea. Kathleen’s mother and grandmother both committed suicide as young women, and Harry worries they suffered from the same symptoms. When Kathleen suffers yet another dangerous breakdown, Harry convinces Kathleen to visit her hometown in Ireland to learn more about her family history.

In Ireland, they discover that the mystery—and the tragedy—of Kathleen’s family history is far older and stranger than they could have imagined.  Kathleen’s fate seems sealed, and the only way out is a terrible choice between a mermaid’s two sirens—the sea, and her lover. But both choices mean death…

Haunting and lyrical, The Mermaid’s Daughter asks—how far we will go for those we love? And can the transformative power of music overcome a magic that has prevailed for generations? 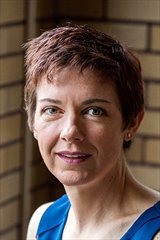 Ann Claycomb’s fiction has been published in American Short Fiction, Zahir, Fiction Weekly, Brevity, Hot Metal Bridge, The Evansville Review, Title Goes Here, and other publications. She has twice been nominated for a Pushcart Prize and has an MFA in fiction from West Virginia University.

“Ann Claycomb’s characters stayed on in my imagination long after I put the book down. Anyone who reads it will never look at The Little Mermaid the same way again.”—Kim van Alkemade, New York Times bestselling author of Orphan #8

“Written with attention to musicality and the murmuring backdrop of the incessant ocean, this inventive story captures the mystery, tragic loss, and beauty of Hans Christan Andersen’s original mermaid tale while thoughtfully and passionately updating it.”—Publishers Weekly

1. This novel plays with two versions of “The Little Mermaid”—both the original by Hans Christian Andersen and the Disney film version. How did your own familiarity with either or both of these versions affect your reading of the novel? Were you surprised by the twists in the story?

2. From the very first chapter, Kathleen describes herself as a bit of a “diva” and a “drama queen” and the other characters agree with this self-assessment. What was your initial response to her as a character? How did your feelings about her change as the story unfolded?

3. This story is told by four different characters: Kathleen, Harry, and the sea witches tell the story from their own perspectives, while Robin’s story is told in the third person. Did you find this an effective way to tell the story? Was there a voice you liked better than the others, or one that you liked less? Why?

4. The sea witches claim throughout the novel that they’ve been wrongly portrayed, specifically in Andersen’s version, as evil and malicious. They also say they are as trapped by the curse as Fand and her descendants are. What do you think of their arguments? Are they evil or just misunderstood? In what ways are they also trapped?

5. Throughout the book, all of the characters, especially Kathleen and her friend Tom, rely on dark humor as a coping strategy, something that many of us do. Why do you think people turn to this kind of humor in very serious situations? How do you think it helped Kathleen and Tom cope with the circumstances of the novel?

6. Harry and Kathleen’s relationship could be seen as full of inequalities: Harry believes that Kathleen is a better singer, more beautiful, and also in need of caretaking, while Kathleen often relies on Harry to be the more practical, grown-up partner. Did their relationship make sense to you? Did you feel that Harry was indeed Kathleen’s “true love”?

7. We learn the long history of Kathleen’s ancestors well before she and Harry are able to piece it together in Ireland. Did you find the other women’s stories compelling? How did their stories affect your outlook on Kathleen’s story?

8. Magic enters the “real world” in the novel in Ireland, first with the appearance of the Selkie and then in the sea witches’ cave. How did the intrusion of the magical world change your expectations for the rest of the novel? Why do you think it first occurred in Ireland? Do you  believe places can have special properties?

9. Were you surprised by Tae’s acceptance of the story that Harry and Kathleen tell when they return from Ireland? What about Tom’s? How does the novel set up the element of fantasy to make it plausible enough for other characters to accept? What about for the reader?

10. Robin and Harry become convinced that writing an opera for Kathleen will somehow help her, but they’re never quite sure how. What did you think the outcome of the opera would be? Did you ever think, like Kathleen, that they were being selfish and merely pursuing the creative process because they love it?

11. When did you realize what Kathleen’s fate would be? Were you surprised? Would you call this a happy ending and do you believe it’s the right one?

12. One of the central questions of the book is “Can the transformative power of music overcome a magic that has prevailed for generations?” Do you believe art can have its own kind of magic? Have you experienced that in your own life? How?