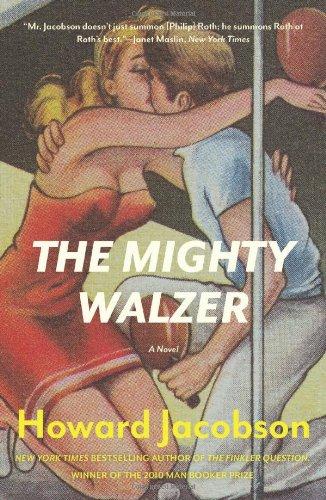 From the beginning Oliver Walzer is a natural–at ping-pong. Even with his improvised bat (the Collins Classic edition of Dr. Jekyll and Mr Hyde) he can chop, flick, half-volley like a champion. At sex he is not a natural, being shy and frightened of women, but with tuition from Sheeny Waxman, fellow member of the Akiva Social Club Table Tennis team, his game improves. And while the Akiva boys teach him everything he needs to know about ping-pong, his father, Joel Walzer, teaches him everything there is to know about “swag.” Unabashedly autobiographical, this is an hilarious and heartbreaking story of one man’s coming of age in 1950’s Manchester.

From the beginning Oliver Walzer is a natural–at ping-pong. Even with his improvised bat (the Collins Classic edition of Dr. Jekyll and Mr Hyde) he can chop, flick, half-volley like a champion. At sex he is not a natural, being shy and frightened of women, but with tuition from Sheeny Waxman, fellow member of the Akiva Social Club Table Tennis team, his game improves. And while the Akiva boys teach him everything he needs to know about ping-pong, his father, Joel Walzer, teaches him everything there is to know about “swag.” Unabashedly autobiographical, this is an hilarious and heartbreaking story of one man’s coming of age in 1950’s Manchester.

Howard Jacobson was born in Manchester, England, and educated at the University of Cambridge, where he studied under F. R. Leavis. He lectured for three years at the University of Sydney before returning to teach at Selwyn College, Cambridge. His novels include Kalooki Nights (longlisted for the Man Booker Prize), The Act of Love, and, most recently, The Finkler Question, winner of the 2010 Man Booker Prize. He lives in London.

“Funny and perceptive…Readers of literary fiction should be acquainted with one of Jacobson’s works, and Finkler may be the easiest choice. Beyond that, this new work is brilliant, funny, engaging, and strongly recommended.”—Library Journal

“Jacobson chronicles the mordantly funny (and highly autobiographical) coming-of-age of Oliver Walzer as he contends with his neurotic Jewish family in 1950s Manchester, England; struggles to find his way with the ladies; and, most crucially, develops into a Ping-Pong champion … Jacobson spares no painful or uncomfortable moments, and while the notion of a novel of Ping-Pong may not sound like the most enticing offer, Jacobson writes with such verve, and his sense of humor is so sharp, that he could turn a novel of basket weaving into a ripsnorter.”
—Publishers Weekly

“An entertaining Jewish picaresque novel … This roman à clef is a Rothian romp, a Goodbye, Columbus across the water in Manchester, where we find young Oliver Walzer desperately trying to do what young men try to do, namely satisfy their baser urges while grappling with whoever the hell they are … A delight from start to finish, and a note-perfect evocation of the gray 1950s.”
—Kirkus Reviews (starred review)

The Mighty Walzer opens with the story of Joel Walzer’s loss in the 1933 World Yo-Yo Championships, with his enormous, homemade Yo-Yo. What does this scene tell us about Oliver’s father and the Walzer family legacy? What traits has Oliver inherited from this failed Yo-Yo champion?

Consider the setting of his novel: 1950s Manchester. How does the town look and feel through young Oliver’s eyes? When he returns forty years later, how has Manchester changed, and how has Oliver changed?

After Oliver’s first visit to the Akiva Social Club, he says of the ping-pong team, “They’ve all got something wrong with them.” (56) What is wrong with each of Oliver’s new peers: Sheeny Waxman, Twink Starr, Aishky Mistofsky, the Marks brothers, and Gershom Finkel?

Consider the character of Gershom Finkel. What is the source of Oliver’s rivalry with Gershom? How are Oliver and Gershom different, and what do they have in common? How does Oliver feel about Gershom’s downfall as a ping-pong player?

Oliver declares, “My ambition was to be crowned conclusive champion of Somewhere Else, not champion of Our Street.” (129–30) Does Oliver succeed in his ambition? Why or why not?

Compare the two women who capture Oliver’s heart: Sabine and Lorna. How are these two love interests similar, and how are they different? What attracts Oliver to each of them? Is Oliver’s marriage to Sabine a surprise? Why or why not?

Discuss Joel Walzer’s career as a salesman at local markets. How does Oliver get involved in his father’s business, and how does he feel about it? How does “swag” infiltrate the Walzer household, and what effect does it have on their lifestyle?

Describe Oliver’s relationship with his maternal aunts, the “Shrinking Violets.” Why did Oliver grow up in a household full of women? How was his sexuality shaped by his early years surrounded by these aunts? How does the Walzer family handle Gershom’s seduction of Dolly and Dora?

Review Oliver’s action-packed first day at Cambridge University. Who does he meet on his first day of school, and what impressions do these new people make on him? How does Oliver act differently now that he has left Manchester behind?

Discuss Oliver’s career at the end of the novel: teaching classes on women authors at small universities in Venice. How does Oliver end up as a lowly scholar instead of a mighty ping-pong champion? What regrets does he seem to have about his past?

Oliver says of his two children, “They were better off without me. The grandiose have no business fathering children. Especially the grandiose who like to lose big. That’s no example to set a child.” (328) Is it true that Oliver’s children are better off without their father? Why is there such a great distance between Oliver and his offspring? How does Oliver end up with two deeply religious children?

Describe Oliver’s reunion with his old Manchester friends at the Ninth World Veterans’ Championships. How have the Akiva and Hagganah players changed in the past forty years, and how have they remained the same? What is the significance of Oliver’s unacknowledged reunion with Lorna? Is he satisfied that Lorna remembers him, or does he want more than recognition from her? Explain.

In Venice, Oliver learns that one of the ping-pong matches he remembers as a loss was in fact a win. As he puts it, “Can a person be so wedded to defeat that he remembers it even where it wasn’t?” (321) Is Oliver Walzer a reliable narrator of his own history? Why would his memories be wrong?

Each chapter of The Mighty Walzer opens with a quotation about ping-pong. Find your favorite chapter and read the quotation at the beginning of it. How does the quotation set the scene for the chapter to come? Is Oliver following or breaking ping-pong’s rules and conventional wisdom in your chosen chapter?

Howard Jacobson dedicates The Mighty Walzer “For the boys of the J. L. B. and G. O. S. J. ping-pong teams, remembering the glory days,” which suggests that the novel is partly autobiographical. Why might Jacobson have decided to write a novel instead of an autobiography about his ping-pong days? Which characters and scenes of the novel feel particularly true?