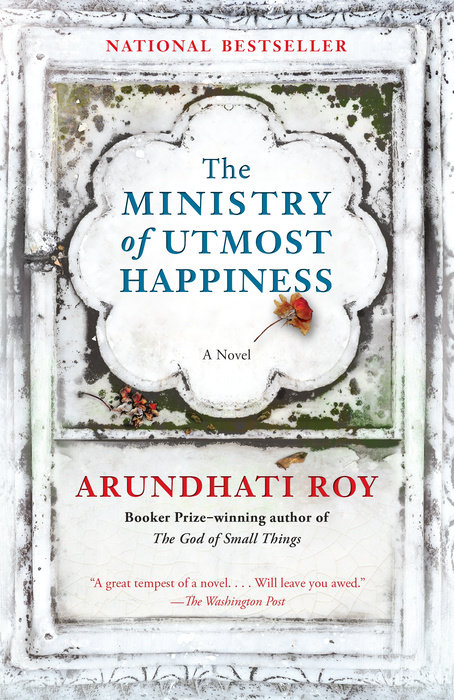 THE MINISTRY OF UTMOST HAPPINESS

The Ministry of Utmost Happiness takes us on an intimate journey across the Indian subcontinent—from the cramped neighborhoods of Old Delhi and the roads of the new city to the mountains and valleys of Kashmir and beyond, where war is peace and peace is war. Braiding together the lives of a diverse cast of characters who have been broken by the world they live in and then rescued, patched together by acts of love—and by hope, here Arundhati Roy reinvents what a novel can do and can be.

The Ministry of Utmost Happiness takes us on an intimate journey across the Indian subcontinent—from the cramped neighborhoods of Old Delhi and the roads of the new city to the mountains and valleys of Kashmir and beyond, where war is peace and peace is war. Braiding together the lives of a diverse cast of characters who have been broken by the world they live in and then rescued, patched together by acts of love—and by hope, here Arundhati Roy reinvents what a novel can do and can be. 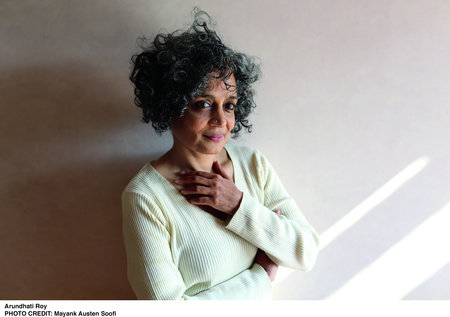 Arundhati Roy is the author of The God of Small Things, which won the Booker Prize and has been translated into more than forty languages. She also has published several books of nonfiction. She lives in New Delhi.

One of the Best Books of the Year: The Washington Post * The Boston Globe * Minneapolis Star Tribune * NPR

“A great tempest of a novel. . . . Will leave you awed.”—The Washington Post

“Staggeringly beautiful. . . . Once a decade, if we are lucky, a novel emerges from the cinder pit of living that asks the urgent question of our global era. . . . Roy’s novel is this decade’s ecstatic and necessary answer.”—The Boston Globe

1. The novel opens with a vignette describing the mysterious death of vultures—and how “not many noticed the passing of the friendly old birds” (page 5). How does this occurrence set the stage and tone for the rest of the novel with regard to the state of India’s society and the unrest that the characters experience within themselves and with the outside world? How does that mood transition into the graveyard setting of the first part of the book?

2. Discuss the complications of Aftab’s upbringing and his parents’ reactions to their child’s gender. What does the family dynamic suggest about the role that biology plays in determining one’s true family versus an individual’s ability to create or choose one’s family?

3. Anjum is told that a Hijra is “a living creature that is incapable of happiness . . . The riot is inside us. The war is inside us” (page 27). To what extent do you see this manifest in Anjum’s character throughout the book, and in what ways does she defy that definition?

4. What roles do magic and superstition play throughout the novel? Which characters are more inclined to subscribe to unconventional beliefs, and do they seem more comforted or disillusioned by those beliefs in the face of harsh realities?

5. Discuss the following idea: “What mattered was that [the moment] existed. To be present in history, even as nothing more than a chuckle, was a universe away from being absent from it, from being written out of it altogether” (page 55). How does the formal inventiveness and variation of the novel’s narrative—which is told through documents, written and oral histories, and other archival materials passed among characters or left in their absence—attest to this sense of one’s relevance in history at any given moment? What are the different characters’ motives for leaving an impression of their existence?

6. How does the variety of perspectives that the documents in the novel afford you as a reader—from Tilo’s notebooks to the letter from Miss Jebeen the Second’s real mother—different, if not conflicting, portraits of the political conflict going on in Kashmir? Overall, did they allow you to more clearly see one side’s argument over another’s? What kind of texture did the shifts in narrative form create in your overall reading experience?

7. What is the intersection between death and life in the novel? Consider the ways in which Anjum’s graveyard/funeral parlor prospers and grows throughout the novel, and the notion that “Dying became just another way of living” (page 320).

8. How does Roy create the atmosphere and emotional tenor of the novel’s primary cities/places in India? What sensory details or descriptions stuck with you the most as the backdrop for the characters’ somewhat nomadic existence?

9. Did you find there to be more similarities or differences between places or scenes where protesting and violence occur in contrast to those where there is relative peace and civility? How does the point of view from which a given scene is narrated affect how you see a place?

10. How is parenthood, and, more specifically, motherhood, explored in the novel? Discuss in particular the mother-child bonds that Anjum, Tilo, and both Miss Jebeens experience.

11. How is religion a defining feature for characters in the novel and a main source of conflict in the society depicted? How do the differing beliefs and political loyalties affect events that transpire in the novel’s different geographical areas of conflict?

12. What role does gender play in the novel, in terms of how characters are expected and allowed to behave as well as how they respond to certain emotions, events, and treatments? Is gender the primary way a person identifies instead of by religion, political party, ethnicity/country of origin, or even profession?

13. The Landlord’s chapters are the only sections written in the first person. How does that point of view color your understanding of the relationship among him, Tilo, Naga, and Musa, including the knowledge that they met on the set of a play? What makes this web of love so intricate, and how does the war intensify their bonds even as it threatens to shatter them?

14. Musa is one character whose identity must be repressed in various ways to ensure his safety, and even his most arduous disguises are not always successful. What does his struggle and that of others in similar situations (people who disappear and/or transform into others) suggest about the mutability of one’s identity—whether it be by necessity or by organic change? How might you interpret the line “Only the dead are free” in that context (page 361)?

15. Discuss the lines of poetry that Tilo writes the end of the book, “How / to / tell / a / shattered / story? / By / slowly / becoming / everybody.  /No. / By slowly becoming everything” (page 442). How do the main characters—Tilo, Musa, Naga, and Anjum—embody the idea of telling a story through the assimilation of its many fragments?

16. By the end of the novel, how did you interpret the meaning of its title?