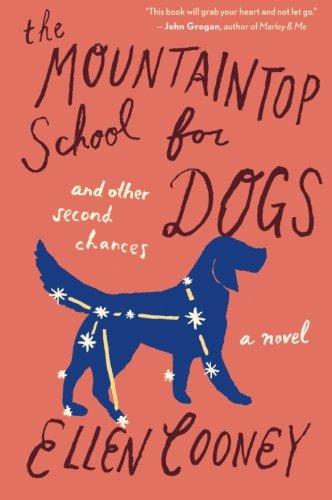 THE MOUNTAINTOP SCHOOL FOR DOGS & OTHER SECOND CHANCES

Evie is making her way to the Sanctuary. She has lied to gain entry. She has pretended to know more than she does about dogs, but she is learning fast. Once the indomitable Mrs. Auberchon lets her pass,

Evie is making her way to the Sanctuary. She has lied to gain entry. She has pretended to know more than she does about dogs, but she is learning fast. Once the indomitable Mrs. Auberchon lets her pass, she will find her way. Like the racing greyhound who refuses to move, the golden retriever who returns to his job as the Sanctuary’s butler every time he’s adopted, and the Rottweiler who’s a hopeless candidate for search-and-rescue, Evie comes from a troubled past. But as they all learn, no one should stay prisoner to a life she didn’t choose.

This is the story of two women and a whole pack of dogs who, having lost their way in the world, find a place at a training school—and radical rescue center—called the Sanctuary. It is a story of strays and rescues, kidnappings and homecomings, moving on and holding on and letting go. And it is, ultimately, a moving and hilarious chronicle of the ways in which humans and canines help each other find new lives, new selves, and new hope.

Ellen Cooney is the author of A Private Hotel for Gentle Ladies and other novels. Her stories have appeared in The New Yorker and many literary journals. She has taught writing at MIT, Harvard, and Boston College, and now lives in Maine with her dogs Andy, Skip, and Maxine—who are each, in their own way, rescues.

“Cooney captures so brilliantly the psychological and emotional similarities between dogs and people—the way both respond to trauma and pain, and the way love and kindness can heal even the deepest wounds. This book will grab your heart and not let go.” —John Grogan, New York Times best-selling author of Marley & Me

“Is there such a thing as a Rescue Book? Well, there is now. This is a miracle of a book. It’s even a spiritual handbook. And it is for readers young and old and all of the in-between. If Cooney needs someone to convince her to write a sequel, I volunteer.” —Gail Godwin, New York Times best-selling author of Evensong and Unfinished Desires

“Dogs were bred by us to serve us in practical ways, but then dogs took it on themselves to serve us most profoundly by healing our broken hearts. Ellen Cooney understands this and is the kind of keenly observational writer who can detail the path to healing only dogs can provide. A delightful read for all of us who can’t imagine life without dogs.” —W. Bruce Cameron, New York Times best-selling author of A Dog’s Purpose and A Dog’s Journey

“A young woman who knows she’s lost, and an older woman who doesn’t think she is, meet a slew of castaway dogs at a snowy mountaintop sanctuary and discover what they didn’t even know they were looking for. A charming novel about overcoming the past and finding meaning and purpose in the present.” —Susan Richards, New York Times best-selling author of Chosen by a Horse

Who is your favorite Sanctuary dog? If you could adopt any one of them, which dog would you be least likely to choose? Would you trust your instincts about imagining a future for the dog with you? Would breed matter? Size? Personality?

When we first meet Evie, she’s emerging from the troubled years of her early twenties and wondering what to do with her life. Although finding the Sanctuary’s ad is accidental, did you feel her decision was only impulsive? She explains, “I felt that I stood in the doorway of a crowded, noisy room, picking up the sound of a whisper no one else seemed to hear” (page 3). Have you ever had to make a similar choice about following your instincts, or some sort of “calling,” even though it means entering a great unknown? How much does self-confidence play into this? Courage?

Evie makes the case that it’s not a good idea to feel pity for an abused rescued dog. What is the novel saying about the difference between sympathy and empathy? What is it saying about methods of teaching and learning, not only in terms of dogs but for humans as well? What about the distinctions made between “training” and “teaching,” and the function of a teacher’s creativity? How does the early scene with Evie putting the trash can in the pen with Hank show what type of trainer she’ll become?

There are no graphic scenes in the novel of violence or cruelty. What is your reaction to the clinical-type notes on the past experiences of the Sanctuary dogs? What about the brief video in which the man involved in dogfighting mourns a dog who was killed in a fight, while saying, “I loved that dog”? Have you ever wished, as Evie does, that you didn’t know what you know about cruelties committed by humans?

How much of a role does the setting play in Mountaintop? The mountain itself? The location is never named—do you imagine the mountain in a specific place? How does Evie’s ascent of the mountain reflect elemental themes in literature and human experience? Did you feel a close presence of nature? Does the author use forces of nature to advance and enhance the story? What about the effects of nature on Evie?

In her one-paragraph application essay touching on the story of the monk and Buddha, Evie scorns the monk’s refusal to speak or write of his vision-experience. Why does she react this way? Do you think she’s right? What is the novel saying about spirituality? What about the insistence on making an effort to communicate, to connect? What is your favorite act of connection between a human and a dog in the novel? Between a human and a human? Between a dog and a dog?

How do you feel about the Sanctuary’s involvement with the Network and the issue of kidnapping abused dogs? Did you feel that Evie’s participation in kidnapping the brood hound, Dapple, was of deep significance to her? How successful is Evie at imagining the old life of Shadow, the hound mix who had been living outdoors on a chain before he was kidnapped? What did it feel like when Shadow found his voice?

“Alpha” is a significant word in Mountaintop. The subject of domination and submission plays a crucial part in Evie’s learning process, along with teaching (and living) practices based on controlling behavior through use of intimidation, pain, and fear. Does the novel succeed in revealing how the dogs of the Sanctuary don’t only need to recover from harm done to their bodies, but to their spirits, their confidence, their dog-ness? Have you ever witnessed someone being harshly over-controlling of their dog? How does the Sanctuary’s rejection of “alpha-ness” affect you? Can a dog and a human be true companions if a human insists on an alpha dynamic?

What is the novel saying about different types of obedience? Do you think Evie successfully manages to describe and understand how obedience is sometimes a positive thing, and sometimes not? Were you surprised that after Evie met Dora the Scottie, she came to feel that sometimes being an alpha is okay? What about the scene at the inn with Tasha, when Evie unwittingly behaves in a dominant manner that’s close to being abusive?

What are your reactions to Mrs. Auberchon? Do your early impressions of her change when you discover she’s the Sanctuary Warden, and what that means? What is your favorite scene with her?

Mountaintop has many funny moments, either through Evie’s narration or in comic scenes. What would this book be like without those moments of lightness? How necessary were they for your reading of the novel? Did it happen that you were moved to sadness and laughter in moments that came closely together? How did this affect your relationship with the characters?

What about Evie’s family? Is she doing the right thing in deciding she wants to be separate and out of touch, at least while she’s in her program? What do you imagine her parents are like? How much of Evie’s pre-Sanctuary life was determined by her parents’ divorce? What about the staffers, whom Evie so misunderstood? They aren’t present in many scenes, but do you feel they’re fully present in the world of the novel?

Were you bothered that Giant George/Eric is a character whose past is never known? Do you imagine a past he might have had? What is the novel saying about the relationship of anyone’s past to the future? Do you think Evie is naive or overly optimistic in coming to believe a past of abuse and loneliness can be erased like a virus on a computer? Evie wonders early on if it’s possible to “go to the place inside someone where loneliness is, when the someone was never anything but lonely” (page 90). Does she find an answer to that question?

If you imagine yourself going to the Sanctuary, say a few weeks after the end of the novel, what do you think is happening with the pit bulls? With the other dogs? With the humans?