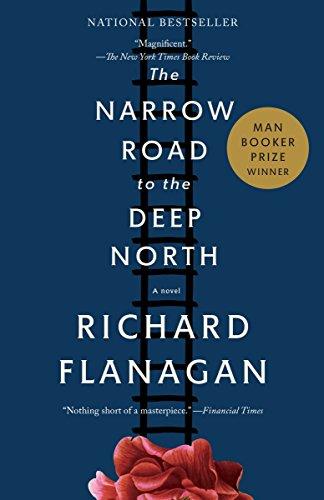 THE NARROW ROAD TO THE DEEP NORTH

A Best Books of the Year: The New York Times,

Star-Tribune, The Economist, The Seattle Times,

is haunted by his affair with his uncle’s young

wife two years earlier. His life, in a brutal Japanese POW camp on the

A Best Books of the Year: The New York Times,

Star-Tribune, The Economist, The Seattle Times,

is haunted by his affair with his uncle’s young

wife two years earlier. His life, in a brutal Japanese POW camp on the

Thai-Burma Death Railway, is a daily struggle to save the men under his

command. Until he receives a letter that will change him forever.

A savagely beautiful novel about the many forms of good and evil, of truth

and transcendence, as one man comes of age, prospers, only to discover all

that he has lost.

Richard Flanagan is the author of five previous

novels—Death of a River Guide, The Sound of One Hand Clapping, Gould’s

Book of Fish, The Unknown Terrorist, and Wanting—which have received

numerous honors and have been published in twenty-six countries. He

“Some years, very good books win the Man Booker Prize, but this year a

“Richard Flanagan has written a sort of Australian War and Peace.”—Alan Cheuse, NPR

“A symphony of tenderness and love, a moving and powerful story that captures

the weight and breadth of a life . . . A masterpiece.”—The Guardian

What is the significance of the name of the novel, The

Narrow Road to the Deep North? Why might Flanagan

have chosen to name his book after Basho’s well-known

travelogue by the same name?

How does the author’s “visual” portrait of the characters

and shape our reaction to their story? Evaluate Flanagan’s choice of

prevalent in the book? Does Flanagan employ much symbolism?

a railway for the Japanese emperor. What does this railway represent

to the Japanese people and their leader? Why are they so devoted to

ensure its completion? Nakamura says that the English also utilized

“non-freedom” in order to ensure progress in their own country. What

comments change our perception of both the European and the Asian

characters and what is happening on the Line?

Evaluate Flanagan’s depiction of the dual nature of man. Consider

representations of good and evil, of man as philosopher-poet and man

as animal, of the public and private self. Does it seem to be possible for

man to resist this dual nature? Does the novel indicate whether man

this beyond man’s control?

Are there any representations of faith in the novel? If so, to what are

the characters faithful? There are also many examples of faithlessness

and unfaithfulness to be found in the book. What causes the characters

to lose their faith or to be unfaithful?

At the conclusion of the story, Flanagan presents us with the image of

torn out. Why do you think that the author chooses to employ this

image at the story’s end?