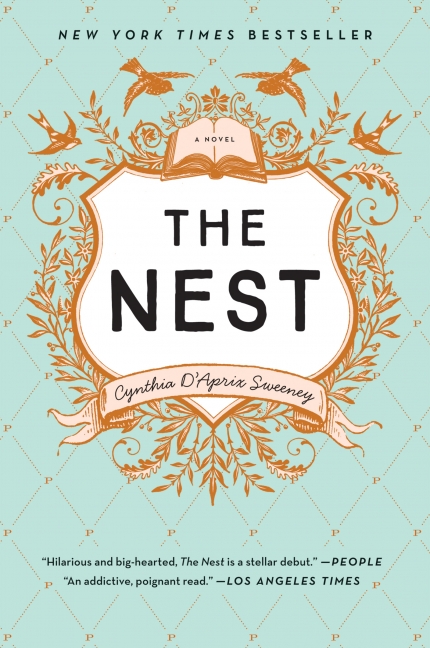 A warm, funny, and acutely perceptive debut novel about four adult siblings and the fate of the shared inheritance that has shaped their choices and their lives.

Every family has its problems. But even among the most troubled, the Plumb family stands out as spectacularly dysfunctional. Years of simmering tensions finally reach a breaking point on an unseasonably cold afternoon in New York City as Melody, Beatrice, and Jack Plumb gather to confront their charismatic and reckless older brother, Leo, freshly released from rehab. Months earlier, an inebriated Leo got behind the wheel of a car with a nineteen-year-old waitress as his passenger.

A warm, funny, and acutely perceptive debut novel about four adult siblings and the fate of the shared inheritance that has shaped their choices and their lives.

Every family has its problems. But even among the most troubled, the Plumb family stands out as spectacularly dysfunctional. Years of simmering tensions finally reach a breaking point on an unseasonably cold afternoon in New York City as Melody, Beatrice, and Jack Plumb gather to confront their charismatic and reckless older brother, Leo, freshly released from rehab. Months earlier, an inebriated Leo got behind the wheel of a car with a nineteen-year-old waitress as his passenger. The ensuing accident has endangered the Plumbs’ joint trust fund, “The Nest,” which they are months away from finally receiving. Meant by their deceased father to be a modest mid-life supplement, the Plumb siblings have watched The Nest’s value soar along with the stock market and have been counting on the money to solve a number of self-inflicted problems.

Melody, a wife and mother in an upscale suburb, has an unwieldy mortgage and looming college tuition for her twin teenage daughters. Jack, an antiques dealer, has secretly borrowed against the beach cottage he shares with his husband, Walker, to keep his store open. And Bea, a once-promising short-story writer, just can’t seem to finish her overdue novel. Can Leo rescue his siblings and, by extension, the people they love? Or will everyone need to reimagine the futures they’ve envisioned? Brought together as never before, Leo, Melody, Jack, and Beatrice must grapple with old resentments, present-day truths, and the significant emotional and financial toll of the accident, as well as finally acknowledge the choices they have made in their own lives.

This is a story about the power of family, the possibilities of friendship, the ways we depend upon one another and the ways we let one another down. In this tender, entertaining, and deftly written debut, Sweeney brings a remarkable cast of characters to life to illuminate what money does to relationships, what happens to our ambitions over the course of time, and the fraught yet unbreakable ties we share with those we love. Cynthia D’Aprix Sweeney is the New York Times bestselling author of The Nest, which has been translated into twenty-six languages and optioned for film by Amazon Studios. She has an MFA from the Bennington Writing Seminars and lives in Los Angeles with her husband and children.

“In her debut, Sweeney spins a fast-moving, often-humorous narrative, and her portrait of each sibling is compassionate even as she reveals their foibles with emotional clarity…assured, energetic, and adroitly plotted…an engrossing narrative that endears readers to the Plumb family for their essential humanity.”—Publishers Weekly

“[A] generous, absorbing novel…Sweeney’s endearing characters are quirky New Yorkers all… [a] lively novel. A fetching debut from an author who knows her city, its people, and their heart.”—Kirkus Reviews (starred review)

“In her intoxicating first novel, Cynthia D’Aprix Sweeney has written an epic family story that unfolds in a deeply personal way. The Nest is a fast-moving train and Sweeney’s writing dares us to keep up. I couldn’t stop reading or caring about the juicy and dysfunctional Plumb family.”—Amy Poehler

1. The Nest does not center on a sole protagonist, but rather a group of people. How did Sweeney’s decision to structure her novel this way—from the perspective of multiple characters, and in the third person, affect the way you identified with the characters? Did you find that it made you more or less sympathetic to each sibling’s predicament, and in what way? Could you imagine yourself in any of their shoes?

2. Each sibling (as well as a few other characters, like Vinnie) keeps secrets—not just from one another, but from the important people in their lives—their partners, their children, their parents, their friends. Did you find that there were secrets that should have been revealed earlier in the story? Did you find that more secrets were kept for selfless or selfish reasons? Have you ever kept any important secrets? Would you do so again?

3. Most of the novel takes place in and around New York City—the Plumb family grew up on Long Island, and three of the four Plumb siblings made Manhattan their home. A 9/11 subplot also weaves its way throughout the novel. What makes—or doesn’t make—this novel feel like a New York novel to you? Did it bolster or contradict any of your opinions or beliefs about New York City?

4. Each sibling seems to feel that they are the ones who need the money from the Nest the most. Did you find yourself leaning toward the pleas or the argument of one sibling in particular, and if so, who, and why?

5. How do the Plumb siblings’ relationships—both with one another, and as a group vs. Leo, evolve over the course of the novel—and from adolescence to adulthood? If you have brothers or sisters, have your relationships changed, or are the dynamics still fundamentally the same?

6. Leo and Stephanie’s romance shifts in significant ways over the course of the novel. In what ways does their relationship change, and in what ways is it affected by the opinions and decisions made by the rest of the family? Have you ever found yourself in a relationship where your partner and your family clashed with one another?

7. How did you feel about the novel’s end, regarding Leo’s fate? Did the epilogue satisfy enough of your desire for a happy ending, or with Leo’s absence, was it more melancholy than expected?

8. Do you feel that the bond of family trumps all—including behavior? Do you think it’s possible to rebuild trust once it has been broken? Why or why not? And are there some bonds that can become stronger than those of family?