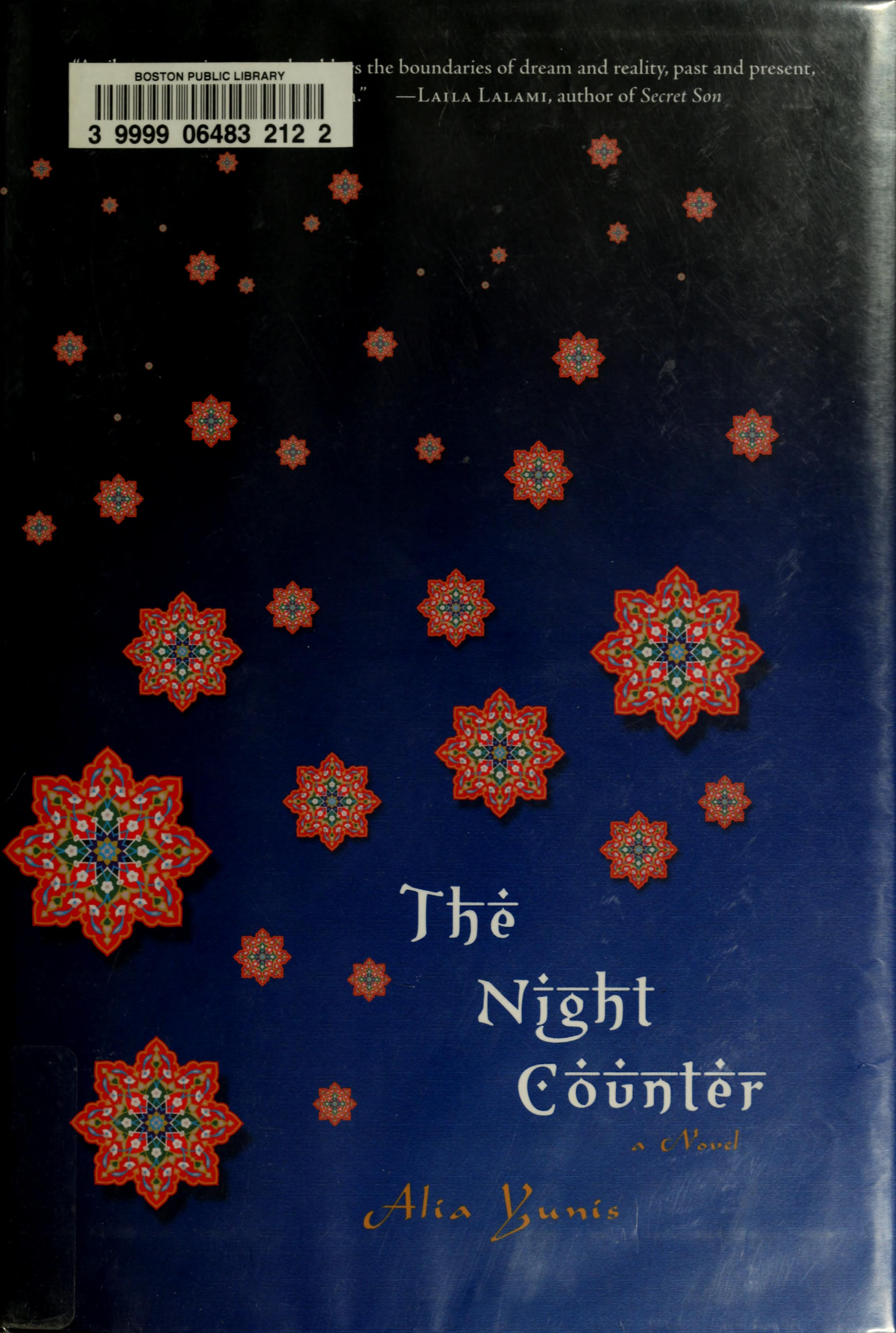 Fatima Abdullah has exactly nine days left to live. For 992 nights, the eighty-five-year-old matriarch of a sprawling Arab American family has received nightly visits from the immortal Scheherazade, the bold and beautiful Persian queen who saved her own life with the spellbinding tales known as The Arabian Nights. Scheherazade has asked Fatima to share one story from her past on each visit. But on the 1,001st night, Fatima knows her storytelling—and her life—will come to an end. With time running out, Fatima still has many accounts to settle. She must find a wife for her openly gay grandson, teach Arabic to her wayward teenage great-granddaughter,

Fatima Abdullah has exactly nine days left to live. For 992 nights, the eighty-five-year-old matriarch of a sprawling Arab American family has received nightly visits from the immortal Scheherazade, the bold and beautiful Persian queen who saved her own life with the spellbinding tales known as The Arabian Nights. Scheherazade has asked Fatima to share one story from her past on each visit. But on the 1,001st night, Fatima knows her storytelling—and her life—will come to an end. With time running out, Fatima still has many accounts to settle. She must find a wife for her openly gay grandson, teach Arabic to her wayward teenage great-granddaughter, make amends with her estranged husband, and most importantly, decide which imperfect family member deserves her ancestral home in Lebanon—a house she has not laid eyes on in seventy years. As Fatima deliberates about all of her children, two bumbling FBI agents spying on the Abdullah household in Los Angeles believe they’ve uncovered an Al Qaeda plot and may thwart Fatima’s dying wishes. Shifting between the U.S. and the Middle East, first-time novelist Alia Yunis pieces together four generations of family secrets in this hilarious, heartwarming debut that creates a vibrant mosaic of modern Arab American life.

Alia Yunis has worked as a journalist and filmmaker in Los Angeles and the Middle East. Currently a professor of communications at Zayed University in Abu Dhabi, Yunis is a PEN Emerging Voices fellow. This is her first novel.

“Yunis’ book club-ready debut uses The Arabian Nights as a departure point for an immigrant-assimilation story….Emotionally rewarding reading that builds to a poignant and thoroughly satisfying climax.”—Kirkus Review

“Yunis’ debut is a magical, whimsical read with plenty of humor and heart.”—Booklist

“An enchanting debut that winks and glitters like the bangles that line Scheherazade’s arms. The Night Counter is funny, sly, charming, delicious, madcap — and a gorgeous celebration of the way stories weave and shape our lives.”—Carolyn Turgeon, author of Godmother

The granddaughter of one of Lebanon’s greatest matchmakers, Fatima tries her hand at traditional matchmaking with disastrous results. How do Fatima’s methods compare to those of her grandson Zade, who runs a professional matchmaking service for Arabs? Is modern matchmaking any more of a business transaction than traditional matchmaking? Why are so many of the family members unable to find a match? Why does it prove difficult to find or recognize love? Is Ibrahim correct when he says, “It takes confidence to love a woman,”and how does that apply to the issues of identity in this novel?

On the surface, Fatima’s stories about the house in Lebanon are a way of passing on her heritage to the next generation. Is that their only function? In what ways do Fatima’s memories of the house serve as a hiding place or a coping mechanism? Why does Scheherazade push Fatima to stop talking about the house and instead tell a passionate love story?

How do Fatima’s descendents navigate their identities as Arab Americans? What impact do the terrorist attacks of 9/11 have on the members of the Abdullah family? Which characters present themselves as either more traditionally American or more traditionally Arab, depending on who they are trying to impress? Which characters are the most honest about who they are? How do you feel about Randa, who goes to the greatest lengths to assimilate? Do you feel her efforts to erase her Arab identity are any better or worse than Amir’s efforts to exploit his Arab identity by playing to stereotypes? What does it mean to be a normal or typical American?

From Scheherazade’s impudent banter to a cheeky matchmaking questionnaire to inept FBI agents reaching outlandish conclusions, the novel is loaded with humor. Why do you think the author decided to take a comedic approach to a novel about the Arab American experience? Does the use of humor help to defuse the stereotypes associated with Arab Americans? The author also deals with weighty issues including love, identity, and loss. Do you find the comedic element adds to the poignancy of these themes? Would the novel have the same emotional impact if the writing had been more solemn?

Were you familiar with Scheherazade as the narrator of The Arabian Nights before you read this book? How would you describe Scheherazade? Did the depiction of Scheherazade and other female characters change your impression of Arab and Arab American women? If yes, how so?

Scheherazade flies all over the United States and to the Middle East on her magic carpet in order to observe the members of the Abdullah clan. Why did the author choose this narrative technique? Would the novel have been as effective if the story had been told entirely from Fatima’s point of view?

Discuss the use of inshallah or “God willing.” Do you agree with Ibrahim when he says, “No need to regret the past. He could not have changed it even before it started”? How much control do you think we have over our own destinies?

The traditional dish kibbe brings the characters together in surprising ways. Think back on the scenes that involve kibbe. What role does food and the making of food play?

Why does Laila serve pork to her husband and his friends as a “secret revenge?” What point is she making about religion, faith, and her disease?

Even though Amir sends out an e-mail telling Fatima’s children that she spends her time attending funerals and talking to herself, none of them are concerned enough to visit until she cuts off her trademark purple hair. Why is this cause for alarm? What does the cutting of her hair represent?

What does the fig tree symbolize? What conditions allow the fig tree to bloom? Why does Fatima want to call Ibrahim to share the news that the tree has fruited?

Fatima can’t read, but her math is “never wrong.” Many of her offspring also have an affinity for numbers. What do they find comforting about numbers and math problems? When Decimal calculates that her baby will be “three-eighths more Arab than me and just three-eighths less Arab than you,” why does Fatima say “it just didn’t make her happy what it equaled her family to be”? What do numbers fail to take into account?

Fatima says her children “do not often tell the truth about anything but the weather.” Why do they talk so much about the weather? How does your understanding of all of the siblings change once you learn about the twins’ deaths? What secrets are being kept and why? Why do the Abdullahs feel compelled to protect each other from the truth? Would their lives have been different if they had told the truth and how?

Fatima learns two family secrets through letters. Why is it significant that hidden truths are revealed in letters? How are the letters and the larger theme of storytelling connected? What is the purpose of memories, according to Scheherazade? What does she mean when she says, “To deal with one’s stories alone would be too much for any soul”?

Inheritances are a central preoccupation of this novel. What legacies, passed down from generation to generation, tie the Abdullah family together? Discuss the keepsakes that Fatima sets aside for her children and the meaning behind them. Why is Hala the only child who is not assigned a keepsake? Does Hala receive another kind of gift?