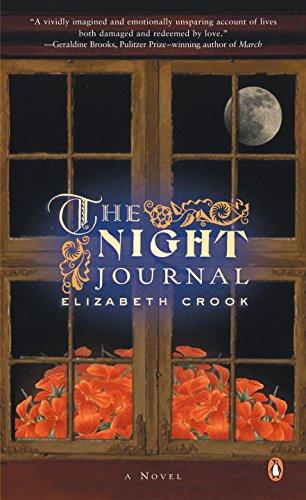 In her third novel, author Elizabeth Crook creates a transporting story of one family’s legacy over the course of one hundred years, stemming from the diaries of a frontier woman faced with the duties, passions, and dangers of her times.

In The Night Journal, the diaries of Hannah Bass have attracted the attention and devotion of academics and readers for decades. Candid and passionate, written in the 1890s, the journals offer the rare account of a woman in the American West during the Victorian era, a time of expansion, indiscriminant violence, and burgeoning industry.

In her third novel, author Elizabeth Crook creates a transporting story of one family’s legacy over the course of one hundred years, stemming from the diaries of a frontier woman faced with the duties, passions, and dangers of her times.

In The Night Journal, the diaries of Hannah Bass have attracted the attention and devotion of academics and readers for decades. Candid and passionate, written in the 1890s, the journals offer the rare account of a woman in the American West during the Victorian era, a time of expansion, indiscriminant violence, and burgeoning industry.

Nearly a century later, the journals have been edited and published to great acclaim by Hannah’s only child, Claudia Bass, known to all as Bassie, now a retired professor of southwestern history and respected worldwide for her work transcribing her mother’s journals. Bassie’s granddaughter, Meg Mabry, however—a thirty-seven-year-old career woman who as a child was raised by Bassie and remains bitter toward Bassie’s domineering, caustic guardianship and the burden of her expectations—finds the very thought of the family legacy oppressive and refuses even to read the journals.

When Bassie learns that the hill on the property of her childhood home is going to be flattened to make room for modern expansion, she insists that Meg travel with her to New Mexico to recover the skeletal remains of two dogs her mother buried there. She recalls being awakened during the night to the sound of gunshots and remembers seeing her mother, Hannah, and a man named Vicente Morales take a pickax to the frozen ground and dig the grave for a dog shot by poachers. Driven and determined in her memory, Bassie refuses to let this one final and vivid image of her mother be bulldozed away.

But when the ground is excavated, far more than dogs’ bones are unearthed, and the discovery of what is buried in the grave sends Bassie and Meg on a search back through time to the turn of the last century and into the secret lives of Bassie’s mother and father—Hannah and Elliott Bass—and Vicente Morales. The journey shakes the foundation of the history on which Bassie has built her life and her long career and changes Meg’s perception of the past as well as her expectations for her own future. In the fabled landscape of her ancestry, Meg allows herself at last to read the journals and reconstruct the past, solving a shocking and confounding mystery. With the support of Jim Layton, the archaeologist involved in the excavation, she sets out to find the one missing journal—suspected to exist but never confirmed—that will detail the final year of Hannah’s life and shed light on the unexplained disappearance of Hannah’s husband, Elliott.

Both a fascinating historical epic of the Southwest and a searing personal story of one family’s coming to terms with its own past, The Night Journal is a contemporary love story and a historical mystery, depicting the conflict between cultures in New Mexico at the turn of the last century, between sexes both then and now, and inevitably the conflicts between generations. It is centered on the mystery of the contents buried in a dog’s grave, but the underlying, broader mystery is about connections between the past and the present and the ways in which people relate to their ancestors both in life and in legacy.

Elizabeth Crook is the author of two previous novels and has been published in anthologies and periodicals such as Texas Monthly and Southwestern Historical Quarterly. She has devoted most of the last decade to researching and writing this book.

“The Night Journal is Austin novelist Elizabeth Crook’s first book in more than a decade, but the epic tale spanning a century of family history is worth the wait. Ms. Crook’s prose is elegant, and her novel is a page-turner. The Night Journal more than meets my personal standard for quality fiction: When I finished, I wished there were more.” —Dallas Morning News

“Crook has a clear gift for detail and dialogue…[T]here’s plenty to keep you engaged and engrossed in The Night Journal.” —Philadelphia Enquirer

“You’ll keep turning pages. You’ll whisper the traditional reader’s self-promise of ‘only one more chapter’ again and again, past bedtime, past midnight, on into the early morning hours.” —Fort Worth Star-Telegram

How important is it in our contemporary lives to feel a connection to the past or to have an understanding of our ancestors? Are the stories about your ancestors important to your own self-image?

Are we, as a generation, pale in comparison to our ancestors, as Meg seems to believe? In other words, do we lack their strength? Are there ways in which we are stronger?

Most of the major characters in the book have suffered difficult or traumatic childhood experiences. Is it inevitable that difficult childhoods lead to dysfunctional relationships later in life, or can these experiences be overcome? What are the different ways in which each character attempts to cope? Do you think Elliott’s attempt to leave the past behind by focusing only on the future, and refusing to talk about his memories, can be effective?

Bassie essentially raised both Nina and Meg. Why did her overbearing personality affect them so differently? Are some children more genetically inclined to survive bad parenting?

Many of the central characters — Bassie, Elliott, Jim, and even Meg — are in some respects orphans. What does it mean to be an orphan? How does being orphaned affect a person’s connection to the world around them?

Which of the historical male characters are you more drawn to — Elliott Bass or Vicente Morales? Which one do you respect more?

Is your respect for Hannah diminished by the ultimate revelation of her affair with Vicente? Do you think you, as a reader, are more forgiving of, and less judgmental about, extramarital affairs between historical characters than you are of those between contemporary characters?

Do you believe Meg and Jim are soul mates, kept apart through circumstance, or are they merely swept up in the drama of Hannah and Elliott’s story?

Are you relieved that Meg ultimately resists having an affair with Jim, or would you feel more satisfied if she had allowed the relationship to go further? In general do you prefer, in literature, to be gratified or left slightly unsatisfied? Do you feel that stories, and perhaps even real-life stories, are richer if a deep love affair is left somewhat unrealized, or if it is fully satisfied?

Given Meg’s personality, do you think she matures and changes enough in the course of the book that her future will be different from what it would have been had she not gone to New Mexico with Bassie?

Meg and Jim are surprised by several discoveries in the last third of the novel. Which of these discoveries took you by surprise as a reader and which did you anticipate?

Were you ultimately more engaged by Meg’s story or by Hannah’s? Which did you find yourself most eager to return to while reading, and most reluctant to leave?