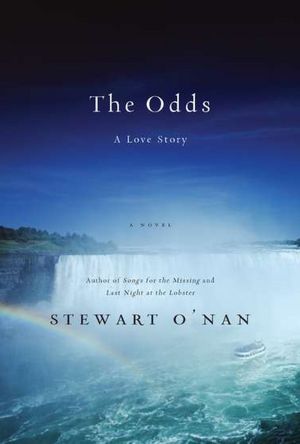 In the new novel from the author of Last Night at the Lobster, a middle-age couple goes all in for love at a Niagara Falls casino.

Stewart O’Nan’s thirteenth novel is another wildly original, bittersweet gem like his celebrated Last Night at the Lobster. Valentine’s weekend, Art and Marion Fowler flee their Cleveland suburb for Niagara Falls, desperate to recoup their losses. Jobless, with their home approaching foreclosure and their marriage on the brink of collapse, Art and Marion liquidate their savings account and book a bridal suite at the Falls’

In the new novel from the author of Last Night at the Lobster, a middle-age couple goes all in for love at a Niagara Falls casino.

Stewart O’Nan’s thirteenth novel is another wildly original, bittersweet gem like his celebrated Last Night at the Lobster. Valentine’s weekend, Art and Marion Fowler flee their Cleveland suburb for Niagara Falls, desperate to recoup their losses. Jobless, with their home approaching foreclosure and their marriage on the brink of collapse, Art and Marion liquidate their savings account and book a bridal suite at the Falls’ ritziest casino for a second honeymoon. While they sightsee like tourists during the day, at night they risk it all at the roulette wheel to fix their finances-and save their marriage. A tender yet honest exploration of faith, forgiveness and last chances, The Odds is a reminder that love, like life, is always a gamble.

Stewart O’Nan was born and raised in Pittsburgh, Pennsylvania. His novels include Songs for the Missing, Last Night at the Lobster, and Emily, Alone. His nonfiction works include Faithful, a chronicle of the 2004 Boston Red Sox, which he co–authored with Stephen King. He currently resides in Pittsburgh with his family. This is his thirteenth novel.

“Stewart O’Nan seems incapable of writing a false line. Whether describing the unimaginable (losing one’s child) or the mundane (losing one’s appetite), his modest sentences crystallize the lives of ordinary people. His previous novel, “Emily, Alone,” described the daily outings of an 80-year-old widow in Pittsburgh. Emily’s pulse beat stronger than her story, but with all the novel’s insight and charm, that lack of action didn’t matter. O’Nan is a author you learn to trust, no matter what he’s writing about…. A few hours with this witty, sad, surprisingly romantic novel might be a better investment for troubled couples than a month of marriage counseling…Odds of enjoying this novel: 1 in 1.”—Ron Charles, The Washington Post

“He brings lightness to every scene, while still making the characters tremendously real, recognizable yet fresh. He works in the micro — the novel slips in under 200 pages — writing close, with fine detail. There is a clarity to O”Nan”s prose: It doesn”t call attention to itself, doesn”t flaunt dazzling sentences or stunning descriptions. This may undersell his work, which is delightful. There is something movie-like in it — not that this should be a movie, as his novel “Snow Angels” was — but it”s movie-like in its easy immersion. Cracking open “The Odds” is like settling back to watch a film as the theater lights come down: It plays out, brightly, before your eyes.”—Carolyn Kellogg, The Los Angeles Times

“This compact page-turner of a novel examines how much good luck a long-term marriage requires…”—Pam Houston, More

“O”Nan is a master of that ambiguity that can never be mistaken for confusion. In cold-as-glacier-melt prose, his quotidian characters grow indelible in Last Night at the Lobster and Emily Alone and now The Odds.”—John Repp, The Cleveland Plain Dealer

What is your opinion of Art and Marion’s marriage? Is it worth saving? Is one of them more sympathetic than the other?

Early in the novel, Marion believes that she isn’t in love with Art to the degree that she should be; later, Art wonders to himself whether it’s possible to have a sexually passionate relationship at their age. How does love change over the course of a long marriage? Are these changes positive or negative?

Who is Karen and what was the nature of her relationship with Marion?

Art is ashamed of losing his job and asks Marion to keep his unemployment secret, despite everyone knowing that she too had been fired earlier. Does society place a sterner judgment on a man losing his job than a woman?

In the middle of the night, Marion makes a bargain with fate: “If he comes to me now, she thought. If I don’t turn around but just think of him, and he comes to me” (p. 46). Her thoughts suggest that she would be willing to try again with Art but also that she might be looking for a sign that it’s okay to give up. Which do you think is true?

Both Art and Marion still nurse the painful memory of his affair with Wendy Daigle twenty years ago. Do you feel that Marion should be over her anger by now, or is it impossible to completely heal a marriage after infidelity? How does Marion’s experience with Karen affect your opinion?

Art believes that “drink revealed one’s true feelings” (p. 124) and so when he gives Marion the new ring during their drunken night, he feels that her tearful acceptance signals a renewed love for him. When she wakes up the next morning, she has no memory of the exchange and her response to the ring is markedly different. Which do you feel was the more authentic response?

Reread the conversation Marion and Art have on page 160 as they raise their glasses in toast to Valentine’s Day, claiming to love each other “whatever happens.” What are their respective intentions and feelings? Is there any misunderstanding between them? As long as they’re both happy, does it matter?

Art and Marion bet their lives’ savings in the casino. Have you ever taken a similarly dramatic risk with some aspect of your own life? What was the situation, what were the stakes, and how did your gamble turn out?

Look at the last sentence in the novel. What does O’Nan mean? Do you agree? Do you feel there was a specific moment during their stay that made the ending inevitable?