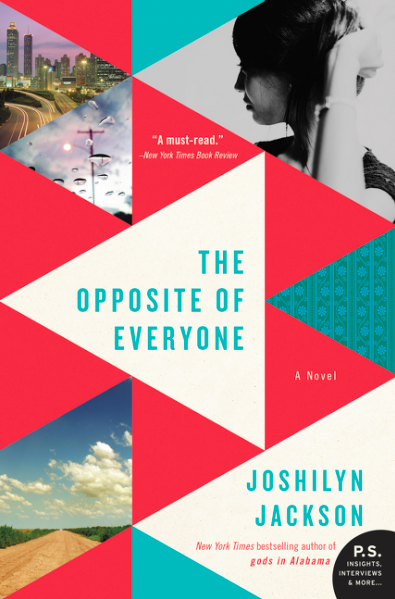 THE OPPOSITE OF EVERYONE

A fiercely independent divorce lawyer learns the power of family and connection when she receives a cryptic message from her estranged mother in this bittersweet, witty novel from the nationally bestselling author of Someone Else’s Love Story and gods in Alabama—an emotionally resonant tale about the endurance of love and the power of stories to shape and transform our lives.

Born in Alabama, Paula Vauss spent the first decade of her life on the road with her free-spirited young mother, Kai, an itinerant storyteller who blended Hindu mythology with southern oral tradition to re-invent their history as they roved.

A fiercely independent divorce lawyer learns the power of family and connection when she receives a cryptic message from her estranged mother in this bittersweet, witty novel from the nationally bestselling author of Someone Else’s Love Story and gods in Alabama—an emotionally resonant tale about the endurance of love and the power of stories to shape and transform our lives.

Born in Alabama, Paula Vauss spent the first decade of her life on the road with her free-spirited young mother, Kai, an itinerant storyteller who blended Hindu mythology with southern oral tradition to re-invent their history as they roved. But everything, including Paula’s birth name Kali Jai, changed when she told a story of her own—one that landed Kai in prison and Paula in foster care. Separated, each holding secrets of her own, the intense bond they once shared was fractured.

These days, Paula has reincarnated herself as a tough-as-nails divorce attorney with a successful practice in Atlanta. While she hasn’t seen Kai in fifteen years, she’s still making payments on that Karmic debt—until the day her last check is returned in the mail, along with a mysterious note: “I am going on a journey, Kali. I am going back to my beginning; death is not the end. You will be the end. We will meet again, and there will be new stories. You know how Karma works.”

Then Kai’s most treasured secret literally lands on Paula’s doorstep, throwing her life into chaos and transforming her from only child to older sister. Desperate to find her mother before it’s too late, Paula sets off on a journey of discovery that will take her back to the past and into the deepest recesses of her heart. With the help of her ex-lover Birdwine, an intrepid and emotionally volatile private eye who still carries a torch for her, this brilliant woman, an expert at wrecking families, now has to figure out how to put one back together—her own.

The Opposite of Everyone is a story about story itself, how the tales we tell connect us, break us, and define us, and how the endings and beginnings we choose can destroy us . . . and make us whole. Laced with sharp humor and poignant insight, it is beloved New York Times bestselling author Joshilyn Jackson at her very best.

Joshilyn Jackson is the New York Times bestselling author of six previous novels, including gods in Alabama, A Grown-Up Kind of Pretty, and Someone Else’s Love Story. Her books have been translated into a dozen languages. A former actor, she is also an award-winning audiobook narrator. She lives in Decatur, Georgia, with her husband and their two children.

“Jackson delivers another quirky, Southern-based, character-driven novel that combines exquisite writing, vivid personalities, and imaginative storylines while subtly contemplating race, romance, family, and self. A searing yet ultimately uplifting look at broken people who heal themselves and each other through forgiveness, love, and the power of stories.”—Kirkus Reviews (starred review)

“The smart-ass, no holds-barred narration by whip-smart Paula/Kali… should please the many fans of Jackson’s snappy writing style.”—Library Journal (starred review)

“Beautifully written, fascinating and deep, The Opposite of Everyone is another must-read novel by Jackson… Jackson has done a phenomenal job of weaving the past with the present and unfolding the story layer after layer. This is a masterfully written tale that readers cannot put down.”—RT Book Reviews (top pick)

“Part twisting suspense, part unflinching exploration of the world of abandoned and exploited girls…This is one of those books that keeps you up late reading, and distracts you from your day, as you yearn to get back to its pages. I can’t recommend it highly enough.”—Susan Rebecca White, author of A Soft Place to Land

1. Paula Vauss is a tough-as-nails divorce attorney who doesn’t place much stock in personal relationships. She describes her upbringing as “a Frankenstein’s monster made of stolen parts…” How much of who Paula is today is a response to her childhood?

2. After years of sending money to her estranged mother, Kai, Paula learns that Kai is dying of cancer and sends a cryptic message with the return of her last check. Are you surprised by her reaction to the news?

3. Why does the pro-bono work with young, underprivileged girls make her feel close to her estranged mother, Kai? How would you describe Kai as a mother?

4. Paula has spent the better part of her life beating herself up for calling the police on her mother. She reflects back on her deed: “If I had never dialed 911, we would have grown up together. I tried to imagine it—a world where Kai never went to prison, and I didn’t land in foster care. Where I never learned to hit hard before I could get hit, and where I had a baby brother.” How does Julian’s arrival compound this guilt?

5. After her initial shock of learning she has a brother, Paula seems to accept the idea of Julian (and, eventually, Hana) into her life. Were you surprised by her acceptance?

6. Kai names her children after Indian deities—Kali for Paula (goddess of destruction, destroyer of evil forces); Ganesha for Julian (remover of obstacles, god of wisdom), and Hanuman for Hana (able to counteract bad Karma). What is the significance of her choices? Did you know anything about Indian deities before reading this novel?

7. The night before Paula leaves for college, a very inebriated Kai tries to tell Paula a different version of the Ganesh story. What do you think Kai was trying to get across to her daughter?

8. Kai used to tell her daughter that “Kali destroys only to renew, to restore justice, Kali brings fresh starts… Your name literally means ‘Hail to the Mother,’ over in India.” How has Paula lived up to her namesake?

9. Paula attempts to tread lightly on the romance front with Birdwine, despite their mutual attraction. She learned in foster care that “Breaking things was what I did best.” What do you think about Paula’s relationship with her ex-lover/private investigator? We see in Paula’s future that she does get married. Do you think she married Birdwine?

10. What do you think is the significance of the title, “The Opposite of Everyone”?

11. At the end of the novel, Paula reflects back on how “All around us are the shared stories that have formed our lives.” How did Kai’s stories bond her children together? Does your family have any “shared stories” that have become family legend?