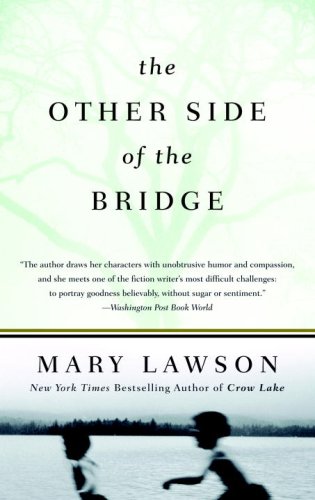 THE OTHER SIDE OF THE BRIDGE

Mary Lawson’s first novel, Crow Lake, mesmerized readers across the country and became a New York Times bestseller, a rare achievement for a debut author. With The Other Side of the Bridge she enchants us again, weaving together the stories of two families as they seek solace and redemption across two generations.

Set against the backdrop of northern Ontario’s haunting landscapes, The Other Side of the Bridge opens with an unforgettable image of Arthur and Jake Dunn, two brothers whose jealousies will take them beyond the edge of reason,

Mary Lawson’s first novel, Crow Lake, mesmerized readers across the country and became a New York Times bestseller, a rare achievement for a debut author. With The Other Side of the Bridge she enchants us again, weaving together the stories of two families as they seek solace and redemption across two generations.

Set against the backdrop of northern Ontario’s haunting landscapes, The Other Side of the Bridge opens with an unforgettable image of Arthur and Jake Dunn, two brothers whose jealousies will take them beyond the edge of reason, to a deadly point of no return. The sons of a farmer, they come of age during the 1930s, when money is tight and a world war is looming. When a beautiful young woman named Laura moves into their community, she unwittingly propels their sibling rivalry to its breaking point.

Years later, the local doctor’s son, Ian, takes a job at the Dunn farm. His mother has left the family, and he develops a troubling attachment to Laura. As he desperately searches for direction in his own life, he stumbles onto a secret that forever alters the course of Arthur’s. With vivid scenes and stunning twists, this is a novel rich with conversation topics.

Mary Lawson was born and brought up in a farming community in central Ontario. She moved to England in 1968, is married with two sons and lives in Kingston-upon-Thames. This is her second novel.

“[A] note-perfect tale of coming of age in Northern Canada, as beautiful as the landscape is stark … [A] deftly interwoven story of love and loss.” —Kirkus, Starred Review

“Lawson beautifully skirts the clichés of sibling rivalry embedded since Cain and Abel, with a story that aches with its inevitability and yet suggests hope.” —New York Daily News

“Lawson’s characters are ordinary, decent people, living out the dramas of everyday life in a place that is beautiful and demanding. Through them she reminds us that old-fashioned storytelling is the best kind and the hardest to do, and that simple themes often touch us the most.” —Arizona Republic

“[Lawson] writes vividly of the joys and hardships of rural life, the harsh but sublime beauties of the natural world, as well as the threads connecting one generation to the next and the depredations wrought by the flow of man-made history.” —Los Angeles Times

How were you affected by the novel’s prologue? What did you discover about Arthur and Jake in this scene? How did your perceptions of the brothers change throughout the book?

How would you answer the questions that conclude the prologue? What accounts for the differences between those who follow the rules, like Arthur, and those who defy them? Which came more easily for you as an adolescent: obedience or defiance?

How were Jake and Arthur affected by their family dynamic? Did their mother pamper Jake too much? Did their father favor Arthur because he was easier to manage, or was Jake difficult to manage because of his father’s favoritism?

What was the effect of the novel’s timeline? How did it compare to your own experience of the continuum between present moments and memory? What parallels run between Ian’s life and Arthur’s?

Discuss the use of the headlines that open each chapter. What do they say about the local and global concerns of humanity? In what way were the headlines timeless, and in what way did they convey the unique attributes of this locale? What headlines would be most significant in marking the chapters of your life?

What is the significance of the two time periods in the lives of the characters? How were the Dunn brothers shaped by a youth of economic hardship and the presence of POWs? How was Ian shaped by an era of greater liberation, with television for entertainment and “risqué” music on the radio? What dreams for the future did each of these generations possess?

Discuss the nature of love and marriage as described in the novel. What made Jake so irresistible to Laura? What made Dr. Christopherson’s wife choose another man? Was Laura’s appeal strictly physical when she first moved to town? What is the riskiest romantic decision you have made?

How are the characters shaped by the novel’s setting? What do the natural surroundings of the town mean to them? What separates those who want to escape from those who bask in the town’s familiarity?

Why is Ian so transformed by the “day of the dragonflies” that concludes chapter nine? What did these memories mean to him?

Discuss the novel’s title. What does it mean for the characters to reach the other side of the bridge? Could Jake and Arthur ever be free of the wounds they inflicted on each other?

Who ultimately was responsible for Jake’s fall from the bridge? Who ultimately paid the price (literally, in terms of his medical bills, and figuratively as well)?

How did you react to the knowledge that Ian followed in his father’s footsteps after all? Did he make the right decision?

Laura confides in Arthur soon after meeting him, telling him she doesn’t believe that God cares about humanity (Chapter Ten). How would you have responded to her?

Discuss the cycles of tragedy conveyed in the Dunn family history, from the death of Arthur’s father to the closing scenes of Carter. How do characters cope with the concepts of fate versus intent? How do they cope with regret?

What common threads link the families in this novel to those in Crow Lake? What makes rural landscapes so appropriate for both of these storylines? Do you think people who grow up in cities feel the same passion for them as the characters in these two novels feel for the land?

If Matt Morrison, the brilliant and adored older brother in Crow Lake, had wandered into this book, which character do you think he would have had more in common with, Ian or Pete?