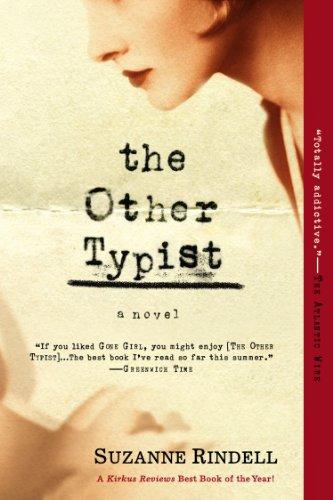 For fans of The Talented Mr. Ripley and The Great Gatsby comes one of the most memorable unreliable narrators in years.

Rose Baker seals men’s fates. With a few strokes of the keys that sit before her, she can send a person away for life in prison. A typist in a New York City Police Department precinct, Rose is like a high priestess. Confessions are her job. It is 1923, and while she may hear every detail about shootings, knifings, and murders, as soon as she leaves the interrogation room she is once again the weaker sex,

For fans of The Talented Mr. Ripley and The Great Gatsby comes one of the most memorable unreliable narrators in years.

Rose Baker seals men’s fates. With a few strokes of the keys that sit before her, she can send a person away for life in prison. A typist in a New York City Police Department precinct, Rose is like a high priestess. Confessions are her job. It is 1923, and while she may hear every detail about shootings, knifings, and murders, as soon as she leaves the interrogation room she is once again the weaker sex, best suited for filing and making coffee.

This is a new era for women, and New York is a confusing place for Rose. Gone are the Victorian standards of what is acceptable. All around her women bob their hair, they smoke, they go to speakeasies. Yet prudish Rose is stuck in the fading light of yesteryear, searching for the nurturing companionship that eluded her childhood. When glamorous Odalie, a new girl, joins the typing pool, despite her best intentions Rose falls under Odalie’s spell. As the two women navigate between the sparkling underworld of speakeasies by night and their work at the station by day, Rose is drawn fully into Odalie’s high-stakes world. And soon her fascination with Odalie turns into an obsession from which she may never recover.

Suzanne Rindell is a doctoral student in American modernist literature at Rice University. The Other Typist is her first novel. She lives in New York City and is currently working on a second novel.

“Best for those who can’t get enough of The Great Gatsby and the Roaring Twenties. . . . This thrilling page-turner cinematically captures the opulence—and sordidness—of the Prohibition Era in New York.”—Shape.com

“Take a dollop of Alfred Hitchcock, a dollop of Patricia Highsmith, throw in some Great Gatsby flourishes, and the result is Rindell’s debut, a pitch-black comedy about a police stenographer accused of murder in 1920s Manhattan. . . . A deliciously addictive, cinematically influenced page-turner, both comic and provocative.”—Kirkus Reviews

“Read The Other Typist. Set in the jazzy 1920s, this super-eerie page-turner about obsession is a striking debut for author Suzanne Rindell.”—ELLE (Canada)

“[F]rom the first page [I] was absorbed: I haven’t been able to put it down . . . reminds me at points of Notes on a Scandal and Patricia Highsmith, but has creepy charms all its own.”—Sadie Stein, The Paris Review

Do you think Rose is a reliable or unreliable narrator? Why? If you did question her veracity, at what point in the novel did you begin to do so?

Why is Rose so captivated by Odalie, someone she wholly disapproves of initially?

Through Odalie, Rose gains entry into a world she’s never seen before, one filled with opulence and rich, glamorous people. Clearly Rose is an outsider who doesn’t belong. Yet she seems to take to it all rather quickly. Why do you think this is so? Why, despite all the new people she comes into contact with, is Odalie the only one she seems to be charmed by?

Some readers may think that Rose is a lesbian. Do you? Why or why not? Might her Victorian sensibility, when viewed by a contemporary reader, be misinterpreted and sexualized even if it might be innocent and pure?

Rose is such a stickler for the rules, yet as the novel progresses, she starts breaking them frequently. In retrospect, do you think she ever follows the rules? Or does she follow only the ones she agrees with?

Rose is actually quite funny, an astute observer. (“I crawled into [bed] . . . exhausted . . . from the efforts of making conversation with a man who if he were any duller might be declared catatonic by those in the medical profession.”) Why, then, is she so humorless when it comes to people like Iris, Gib, and the Lieutenant Detective, especially?

Rose states in the beginning of the book: “I am there to transcribe what will eventually come to be known as the truth.” The novel plays with the notion that the written word is superior to the spoken-Rose’s transcripts and her diary that the reader is reading, versus the narration she provides throughout the book. Do you think the written word carries more weight than oral history? Why or why not?

Consider the many possible story lines for Odalie’s history. Did she really kill her ex-fiancé? Was Gib really the driver of the train? Was she indeed a debutante from a wealthy family in Newport? Did she at a young age leave her mother to live with Czakó, the Hungarian, in Europe? Which of these stories is the most plausible? Do you believe any of them is true?

What do you make of Rose’s appearance? Throughout the novel she takes pains to point out that she is plain-looking. Yet the Lieutenant Detective obviously finds her attractive, and at the end of the book, she is a doppelgänger for Odalie, who is portrayed as a knockout. What do you think Rose really looks like? Should her appearance even matter?

When Rose is in the hospital at the end of the book, the doctors call her “Ginevra.” That is the name Teddy used for Odalie. Who do you think is the real Ginevra? Are Odalie and Rose the same person?

What do you make of the kiss at the end of the novel? Is Rose doing it just to get the Lieutenant Detective’s knife, or is there some true feeling behind it? Were you surprised that she admits she’s never kissed a man before?

What do you believe really happened at the end of the book? Did Rose kill Teddy? Or did Odalie?