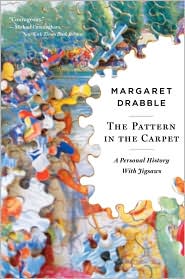 THE PATTERN IN THE CARPET

A Personal History with Jigsaws

The Pattern in the Carpet: A Personal History with Jigsaws is an original and brilliant work. Margaret Drabble weaves her own story into a history of games, in particular jigsaws, which have offered her and many others relief from melancholy and depression. Alongside curious facts and discoveries about jigsaw puzzles–did you know that the 1929 stock market crash was followed by a boom in puzzle sales?–Drabble introduces us to her beloved Auntie Phyl, and describes childhood visits to the house in Long Bennington on the Great North Road, their first trip to London together, the books they read,

The Pattern in the Carpet: A Personal History with Jigsaws is an original and brilliant work. Margaret Drabble weaves her own story into a history of games, in particular jigsaws, which have offered her and many others relief from melancholy and depression. Alongside curious facts and discoveries about jigsaw puzzles–did you know that the 1929 stock market crash was followed by a boom in puzzle sales?–Drabble introduces us to her beloved Auntie Phyl, and describes childhood visits to the house in Long Bennington on the Great North Road, their first trip to London together, the books they read, and the jigsaws they completed. She offers penetrating sketches of her parents, siblings, and children, and shares her thoughts on the importance of childhood play, on art and writing, and on aging and memory. And she does so with her customary intelligence, energy, and wit. This is a memoir like no other.

Margaret Drabble is the author of The Sea Lady, The Seven Sisters, The Peppered Moth, and The Needle’s Eye, among other novels. She is the editor of the fifth and sixth editions of The Oxford Companion to English Literature. For her contributions to contemporary English literature, she was made a Dame of the British Empire in 2008.

“The Pattern in the Carpet…not only looks like a memoir, it reads like one, and a fine one at that.”—Montreal Gazette

“One of a kind…It will take the reader on a journey unlike anything else in the bookstore.”—Christian Science Monitor

In the Introduction, Drabble begins the book by saying it is not a memoir, though it might look like one. What are the implications of this statement? What sorts of expectations do we bring to a memoir? How does this book defy or fulfill those expectations?

On page 260, Drabble confesses that her first conception of her book about jigsaws was as “the perfect stocking-filler. It would surely be as desirable as a Van Gogh calendar or a fake Sumerian necklace or a cardboard build-your-own dinosaur.” In other words, she assumed that her book about jigsaw puzzles would be sold in a museum shop, like a jigsaw puzzle itself. In what ways is The Pattern in the Carpet indeed like a jigsaw puzzle? In what ways is it not?

Drabble writes that the book is not a history of jigsaw puzzles, “though that is what it was once meant to be.” Throughout the text, Drabble makes occasional references to the writing of the book, breaking the narrative voice to speak directly to the reader and call attention to the book itself. Why does she do this? What did you think of these authorial asides and interruptions?

On page 12, Drabble states, “I am not very good at jigsaws. That is one of the reasons why I like them so much.” Does this statement surprise you? Do you enjoy tasks that you’re not particularly accomplished at? What can be gained by doing a pastime that is difficult for you?

The book begins and ends with Auntie Phyl. What role did Auntie Phyl play in the author’s life?

On page 19, Drabble mentions that she’s written about Auntie Phyl before, but in fiction. “I moved her into a dark territory that was not her natural habitat. It was my mother’s, but it was not my aunt’s. By writing this book I would like to rescue her (and thereby a part of myself) from that contamination, to show her in plainer, brighter and more cheerful colours and in simpler prose.” In this statement, the author has conflated Auntie Phyl, her mother, and herself. Do we come to understand the different roles Auntie Phyl and Drabble’s mother played in Drabble’s life? Which one does Drabble most resemble? Why was it important for her to make these distinctions?

At the beginning of Chapter V, Drabble considers the aesthetic tastes of her forbears, the Bloors and the Drabbles. As opposed to the Brontë family, whom Drabble identifies as isolated but intellectual, the Bloors and the Drabbles would have only been acquainted with the images of high art through “calendar art, jigsaw art, biscuit tin art, tea caddy art . . . [They] lived in a debased and despoiled landscape, amidst the decor and mass-produced artefacts of the machine age, which were directed at a popular taste without much education or aspiration” (p. 38). How does Drabble’s portrayal of postwar middle-class England compare with the way you encountered artistic works as a child? (Think about Saturday morning cartoons.) How do these compare with the way children learn about art today?

In her discussion of the British children’s book author Alison Uttley, Drabble discusses the prevalence of the pastoral in children’s books, and then the notion of the pastoral itself: “The question of authenticity and artificiality has attached itself to the pastoral since the form was invented over two thousand years ago; indeed, the form is itself a question, forever playing the real against the unreal, the brutal against the idyllic, the true country against the town’s idea of the country” (p. 55). What are some contemporary novels or memoirs that would qualify as “pastorals”? By her definition, is The Pattern in the Carpet a pastoral?

Drabble considers that some adults continue to have a childlike capacity for play. In fact, she writes, “Some families never grow out of play. I watch them with wonder, excluded, unwilling and unable to join in” (pp. 60–61). She both envies and disdains this quality in adults. What do you think about your capacity for play? How do you define it? Is it important?

Drabble asserts that her fondness for jigsaw puzzles is because they are nonverbal; they act as reprieve from her usual activity and profession: writing. Do you find you have a need to rest or relax by doing activities that are opposed in some way to your work? What are they?

On page 169, Drabble writes, “One of the pleasures of the jigsaw-puzzle world lies in that safety, of knowing that all the pieces will fit together in the end.” Do you agree that this is part of why people like to do jigsaws? How is this an essentially “escapist” pleasure?

In Chapter XXVIII, Drabble notes that when she was younger, she assumed that psychological pain would recede as one grew older, eclipsed by physical pain. “That’s what I used to think, or fear, or hope” (p. 171). Later on she says, “At times I feel some pride in my continuing capacity for feeling really, really bad” (p. 172). What do you think Drabble means by that? Why would she feel pride in her suffering?

Some of the jigsaw’s appeal is due to a wider attraction for miniaturization and reproduction. Drabble quotes another essayist who says that the appeal of the miniature is that it creates a nostalgic version of childhood and history that is small, and thus able to be manipulated (p. 220). Do you agree with this interpretation?

Toward the end of the book, Drabble confesses that she is “uneasy about the Uttley-style fetishization of the past . . . the overlay and appropriation of ‘real’ objects by fashion and nostalgia, and the concomitant fear of ‘inauthenticity’” (pp. 316–17). Do you agree that there is a current trend toward idealizing the past, the “country life,” and objects that refer to that time? If so, is this problematic? Do you find, as Drabble does, a “bad faith” in this sort of nostalgia?

Death is always nearby in Drabble’s book—Auntie Phyl’s, her mother’s, and her own. Jigsaws are presented sometimes as merely a diversion to pass the time until death. But the book ends with a comment on books themselves, and the effort of writing them: “Books, too, have beginnings and endings, and they attempt to impose a pattern, to make a shape. We aim, by writing them, to make order from chaos. We fail. The admission of failure is the best we can do. It is a form of progress” (p. 338). What do you think of these words, from a writer toward the end of her life? Do you imagine a younger writer would agree? Do you agree?