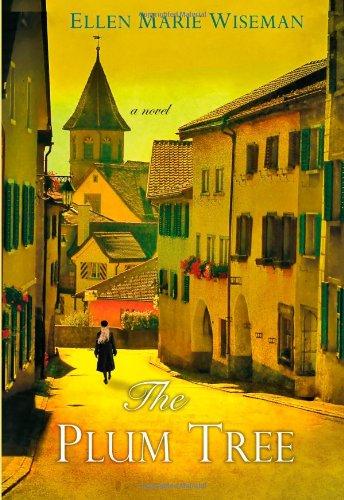 A deeply moving and masterfully written story of human resilience and enduring love, The Plum Tree follows a young German woman through the chaos of World War II and its aftermath.

“Bloom where you’re planted,” is the advice Christine Bölz receives from her beloved Oma. But seventeen-year-old domestic Christine knows there is a whole world waiting beyond her small German village. It’s a world she’s begun to glimpse through music, books—and through Isaac Bauerman, the cultured son of the wealthy Jewish family she works for.

Yet the future she and Isaac dream of sharing faces greater challenges than their difference in stations.

A deeply moving and masterfully written story of human resilience and enduring love, The Plum Tree follows a young German woman through the chaos of World War II and its aftermath.

“Bloom where you’re planted,” is the advice Christine Bölz receives from her beloved Oma. But seventeen-year-old domestic Christine knows there is a whole world waiting beyond her small German village. It’s a world she’s begun to glimpse through music, books—and through Isaac Bauerman, the cultured son of the wealthy Jewish family she works for.

Yet the future she and Isaac dream of sharing faces greater challenges than their difference in stations. In the fall of 1938, Germany is changing rapidly under Hitler’s regime. Anti-Jewish posters are everywhere, dissenting talk is silenced, and a new law forbids Christine from returning to her job—and from having any relationship with Isaac. In the months and years that follow, Christine will confront the Gestapo’s wrath and the horrors of Dachau, desperate to be with the man she loves, to survive—and finally, to speak out.

Set against the backdrop of the German homefront, this is an unforgettable novel of courage and resolve, of the inhumanity of war, and the heartbreak and hope left in its wake.

Ellen Marie Wiseman was born and raised in Three Mile Bay, a tiny hamlet in Northern New York. A first generation American, Ellen has traveled frequently to visit her family in Germany, where she fell in love with the country’s history and culture. A mother of two, Ellen lives peacefully on the shores of Lake Ontario with her husband and three dogs.

“The Plum Tree is a touching story of heroism and loss, a testament to the strength of the human spirit and the power of love to transcend the most unthinkable circumstances. Deft storytelling and rich characters make this a highly memorable read and a worthy addition to the narratives of the Holocaust and Second World War.”—Pam Jenoff, author of The Ambassador’s Daughter

“A haunting and beautiful debut novel.”—Anna Jean Mayhew, author of The Dry Grass of August

“In The Plum Tree, Ellen Marie Wiseman boldly explores the complexities of the Holocaust. This novel is at times painful, but it is also a satisfying love story set against the backdrop of one of the most difficult times in human history.”—T. Greenwood, author of Two Rivers

Christine works as a domestic for a Jewish family, where she falls in love with Isaac. What brings them together? What do you think it was like the first time they met? Do you think they fell in love instantly or over time? How do you think Isaac felt about her family, knowing how the Nazis felt about Jews? Do you think Christine was envious of his family’s wealth, or did she give it little thought?

The first anti-Jewish poster Christine sees explains who is a Jew and who isn’t, and forbids Jews to enter public places like banks and post offices. It is said that Hitler drew his first ideas about how to treat the Jews from blacks being denied civil rights in the South. What do you think are the differences? Why was the KKK kept in check while the Nazis were not?

Christine offers to hide Isaac before the Nazis take him and his family away. Would you have taken the opportunity to go with her, or would you have stayed with your family? Do you think Isaac’s decision was based on loyalty to his parents and sister, or was it made because he thought they’d be okay since he had no idea how bad it was going to get?

The Nazis said they were going to “relocate” the Jews. What if this was happening where you live? How far would you be willing to go to protect your friends and neighbors? Would you risk your life or the lives of your children to save someone else?

We live in a world where global news and information is instant. During WWII in Nazi Germany, public information was manipulated and limited. Propaganda was used to sway public opinion. There were only two Nazi-run newspapers available, and the Nazis controlled the radio. Listening to foreign broadcasts was a crime punishable by death. After the Nazis were defeated, most Germans found out by word of mouth that Roosevelt had died, that the Wehrmacht had unconditionally surrendered, and that the atom bomb had been dropped on Japan. How do you think the availability of information affects the way people think and act? Do you think the Holocaust could have been stopped if information had been more readily available? Do you think the war would have ended sooner? What differences would better access to information have made?

Lagerkommandant Grünstein is loosely based on a real SS officer, Kurt Gerstein, who tried to tell the world what the Nazis were doing. After the war, Gerstein turned himself over to the French and gave them a detailed account of what had happened in the camps. Before his trial, he was found dead. There is some speculation that other imprisoned SS might have killed him. If he’d been given the chance to go to trial, should he have been punished with the rest of the SS or set free?

Christine thinks of her mother as key to their survival and the last thread to anything familiar and normal. From food in their stomachs to clean clothes and warm baths, Mutti provided the only bits of comfort to be had. During the war, Germany was made up of women, children, and old people struggling to survive food shortages and air raids while the men were off fighting. What do you think it was like in Germany for the women left behind? What differences would there have been between single women and those with children to take care of? At one point Christine mentions that some women sell themselves to feed their children. How far would you go to keep yourself and your children alive?

How do you think Christine changed over the course of the novel? What about Isaac, Maria, Heinrich, and Karl? Even though siblings are raised together, sometimes they turn out differently. What differences do you see in Christine and Maria? Heinrich and Karl?

Christine and the Lagerkommandant talk about what the prisoners will do to stay alive, from spying on each other to pushing their fellow Jews into the ovens to burn. How far would you go to stay alive in a place like Dachau? Do you think you would be strong enough to keep going like Hanna and Christine, or do you think you’d give up?

The Americans bombed Christine’s village and shot at her and her little brother. How do you think she felt when they occupied her village? Do you think she saw them as saviors or monsters? Why?

When Christine and Isaac are sent to Dachau, she worries that he has lost his will to live. Discuss the will to live. Do you think it’s the same for everyone, or is it stronger in some than others?

Discuss the significance of the plum tree. What does it symbolize, both as a pit when it’s first planted and later, as a blossoming sapling at the end of the book?

Do you think Christine and Isaac’s secret meetings are romantic or frightening? Do you think fear of the future made their love stronger and more passionate? They didn’t have sex because they were afraid she would become pregnant. Do you think that is realistic, or do you think the author used it to add more tension to the story? When Isaac puts an end to their meetings, Christine only tries to see him twice. Would you have agreed to wait and see what happened, or would you have gone to his house more often, Gestapo or no Gestapo?

Mutti agrees to put food out for the passing Jewish prisoners even though it’s dangerous and she can barely feed her family. Why do you think she does it? Would you have done the same thing?

Maria hates herself because the Russians raped her. She thinks no one will ever love her. When she finds out she is pregnant, she is devastated. Do you think she died by accident trying to get rid of the baby, or do you think she killed herself? What would you have done in her situation?