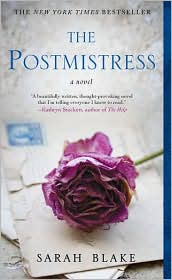 Those who carry the truth sometimes bear a terrible burden…

Filled with stunning parallels to today’s world, The Postmistress is a sweeping novel about the loss of innocence of two extraordinary women-and of two countries torn apart by war.

On the eve of the United States’s entrance into World War II in 1940, Iris James, the postmistress of Franklin, a small town on Cape Cod, does the unthinkable: She doesn’t deliver a letter.

In London, American radio gal Frankie Bard is working with Edward R. Murrow, reporting on the Blitz. One night in a bomb shelter,

Those who carry the truth sometimes bear a terrible burden…

Filled with stunning parallels to today’s world, The Postmistress is a sweeping novel about the loss of innocence of two extraordinary women-and of two countries torn apart by war.

On the eve of the United States’s entrance into World War II in 1940, Iris James, the postmistress of Franklin, a small town on Cape Cod, does the unthinkable: She doesn’t deliver a letter.

In London, American radio gal Frankie Bard is working with Edward R. Murrow, reporting on the Blitz. One night in a bomb shelter, she meets a doctor from Cape Cod with a letter in his pocket, a letter Frankie vows to deliver when she returns from Germany and France, where she is to record the stories of war refugees desperately trying to escape. The residents of Franklin think the war can’t touch them- but as Frankie’s radio broadcasts air, some know that the war is indeed coming. And when Frankie arrives at their doorstep, the two stories collide in a way no one could have foreseen.

The Postmistress is an unforgettable tale of the secrets we must bear, or bury. It is about what happens to love during war­time, when those we cherish leave. And how every story-of love or war-is about looking left when we should have been looking right.

Sarah Blake lives in Washington, D.C., with her husband, the poet Josh Weiner, and their two sons.

“Some novels we savor for their lapidary prose, others for their flesh and blood characters, and still others for a sweeping narrative arc that leaves us light- headed and changed; Sarah Blake’s masterful, The Postmistress, serves us all this and more. Compassionate, insightful, and unsentimental, this masterful novel is told in a rare and highly successful omniscient voice, one that delves deeply into the seemingly random nature of love and war and story itself. This is a superb book!”
—Andre Dubus III, author of House of Sand and Fog

“The Postmistress is the fictional communique readers have waited for. Sarah Blake has brought small-town American life and ravaged Europe during WWII to us with cinematic immediacy. The romantic, harrowing — and utterly inimitable– story of radio journalist Frankie Bard (appalled yet intoxicated by tragedy as no character I’ve ever read before) contains the uncompromised sensibility found in the writings of Martha Gellhorn. The Postmistress belongs in what Gellhorn called “the permanent and necessary” library.”—Howard Norman, author of The Bird Artist and Devotion

“Great books give you a feeling that you miss all day until you finally get to crawl back inside those pages again. The Postmistress is one of those rare books. When I wasn’t reading it, I was thinking about it. Sarah Blake seamlessly moves from inside one character to another, in a novel that reminds us of a time when the news travelled from post to paper to radio and that is how we learned about the world. The Postmistress made me homesick for a time before I was even born. What’s remarkable, however, is how relevant the story is to our present-day times. A beautifully written, thought provoking novel that I’m telling everyone I know to read.”
—Kathryn Stockett, author of The Help

“An unforgettable, insightful, and compelling novel The Postmistress engages the reader’s instincts at the deep level of fight or flight. For WWII radio reporter Frankie Bard, however, the gut response to horror is see and tell. Sarah Blake’s prose perfectly recreates the cadences of passion and of the inner life while also conjuring up the wrenching, nightmare suspense of history in the making.” –Sena Jeter Naslund, author of Ahab’s Wife and Abundance, a Novel of Marie Antoinette

Much of The Postmistress is centered on Frankie’s radio broadcasts—either Frankie broadcasting them, or the other characters listening to them. How do you think the experience of listening to the news via radio in the 1940s differs from our experience of getting news from the television or the internet? What is the difference between hearing news and seeing pictures, or reading accounts of news? Do you think there is something that the human voice conveys that the printed word cannot?

“Get in. Get the story. Get out.” That is Murrow’s charge to Frankie. Does The Postmistress make you question whether it’s possible to ever really get the whole story? Or to get out?

When Thomas is killed, Frankie imagines his parents sitting miles away, not knowing what has happened to their son and realizes there is no way for her to tell them. Today it is rare that news can’t be delivered. In this age of news 24/7, are we better off?

Seek Truth. Report it. Minimize Harm. That is the journalist’s code. And it haunts Frankie during the book. Why wasn’t Frankie able to deliver the letter or tell Emma about meeting Will? For someone whose job was to deliver the news, did she fail?

If you were Iris, would you have delivered the letter? Why or why not? Was she wrong not to deliver it? What good, if any, grew up in the gap of time Emma didn’t know the news? What was taken from Emma in not knowing immediately what happened?

In the funk hole, Will says that “everything adds up”, but Frankie disagrees, saying that life is a series of “random, incomprehensible accidents”. Which philosophy do you believe? Which theory does The Postmistress make a better case for?

After Thomas tells his story of escape, the old woman in the train compartment says “There was God looking out for you at every turn.” Thomas disagrees. “People looked out. Not God.” He adds, “There is no God. Only us.” How does The Postmistress raise the questions of faith in wartime? How does this connect to the decisions Iris and Frankie make with regard to Emma?

Why do you think Maggie’s death compels Will to leave for England?

What are the pleasures and drawbacks of historical novels? Is there a case to be made the The Postmistress is not about the 1940’s so much as it uses the comfortable distance of that time and place in order to ask questions about war? About accident? Aren’t all novels historical? Why or why not?

We know that Emma was orphaned, that Will’s father had drinking problems, that Iris’s brother was killed in the First War, and that Frankie grew up in a brownstone in Washington Square. How do these characters’ backgrounds shape the decisions that they make? And if we didn’t have this information, would our opinion of the characters and their actions change?

Early in the novel, Frankie reflects on the fact that most people believed that “women shouldn’t be reporting the war.” Do you think that Frankie’s gender influences her reporting? How does Frankie deal with being a female in a male-dominated field? And do you think female reporters today are under closer scrutiny because of their gender?

Why does Otto refuse to tell the townspeople that he’s Jewish? Do you think he’s right not to do so?

Why is the certificate of virginity so important to Iris? What does it tell us about her character?

When Frankie returns to America, she doesn’t understand finds it impossible to grasp that people are calmly going about their lives while war rages in Europe. What part does complacency play in The Postmistress?

Discuss the significance of the Martha Gellhorn quote at the beginning of the book, “War happens to people, one by one. That is really all I have to say, and it seems to me I have been saying it forever.” What stance towards war, and of telling a war story does this reveal? How does it inform your reading of The Postmistress?