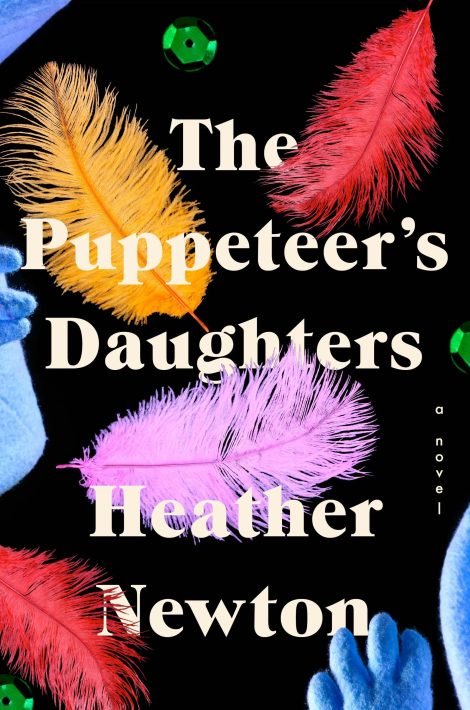 Rosie, born out of wedlock, sees the missing sister as her key to acceptance as a full member of the puppeteer’s family.

Cora, the youngest, born after Walter achieved fame and fortune, is most concerned with extricating herself from running Walter’s company so that she can pursue her own life.

The sisters each knew a different version of their enigmatic father, but all grew up in the presence of fairy tales acted out with marionettes and shadow puppets. If they are to find the fourth daughter and claim the legacy their father has left them, the three must confront their fractured relationships with their father and each other. Infused with fairy tales that sometimes spill magic into the sisters’ real lives, The Puppeteer’s Daughters is a stunningly-woven family saga about the cost and rewards of claiming a creative life.

Heather Newton‘s novel Under The Mercy Trees (HarperCollins, 2011) won the Thomas Wolfe Memorial Literary Award, was chosen by the Women’s National Book Association as a Great Group Reads Selection, and was named an Okra Pick by the Southern Independent Booksellers Alliance. Her short story collection, McMullen Circle (Regal House, 2022), was a finalist for the W.S. Porter prize. Her novel The Puppeteer’s Daughters (Turner, 2022) is her second novel. A practicing attorney, she teaches creative writing for UNC-Asheville’s Great Smokies Writing Program and is co-founder and program manager for the Flatiron Writers Room in Asheville, North Carolina (flatironwritersroom.com).

“Heartfelt, intriguing and breathtakingly creative. The Puppeteer’s Daughters proves that happily-ever-afters aren’t always the ending to fairytales — sometimes they’re just the beginning. Heather Newton is a born storyteller, showing us that magic can spill into our everyday lives when we step out of our comfort zones.” —Sarah Addison Allen, NYT bestselling author of Other Birds

“With this mix of traditional fairy tales, offbeat original scripts, insights into the world of puppetry, a touch of King Lear, and the basic personality of a romcom, The Puppeteer’s Daughters is a charming read with some unexpected thoughtfulness between the lines.” —New York Journal of Books

“A heartwarming story about self-acceptance, forgiveness, and the strings sometimes attached to family love.” —Foreword Reviews

“The Puppeteer’s Daughters brings us into the world of puppetry and fairytales, rivalries and love stories, both through tales interwoven throughout the novel and in the lives of a family of sisters, who must suddenly redefine who they are to one another. This book is perfectly plotted, wonderfully paced, with characters I loved and rooted for page after page. Newton excellently weaves individual narratives of the daughters’ as they navigate their own journeys alongside the shifting dynamics of the sisters as a whole, all the while delighting us with the intricacies of puppetry, from the classic tales themselves to the mechanics of how to bring the little wooden bodies to life. I love this book.” —Tessa Fontaine, author of The Electric Woman: A Memoir in Death-Defying Acts

1. Now that you’ve read the novel, go back and reread the epigraph. Why do you think Newton chose this quote?

2. Which sister (Jane, Rosie, or Cora) do you think changes or grows the most by the end of the novel? How do the sisters’ relationships with their father, and with each other, change throughout the novel?

3. What do you think of Rosie’s “twig house” relationship with Gary?

4. Thievery is a theme in this novel, as is often true in fairy tales. What are some important thefts in the book? How do the thefts affect the thieves and the victims? Why do you think Cora’s thefts stop?

5. What do you think Walter’s gypsy princess marionette symbolizes for him?

6. What are the respective attitudes of Jane, Cora, Rosie, and Olin toward creativity and claiming a creative life? In what ways (if any) do you think Rosie is creative?

7. In Cora’s story, “The Sound Seeker,” the Sound Seeker can find lost words. What are some words in your own life that have been lost which you wish you could retrieve?

8. In Cora’s variation on the story “Diamonds and Toads,” the Reverser of Curses makes the following statement about curses and blessings: “It can be hard to tell the difference at times. These things have two sides, and the side one sees has more to do with the seer than the seen.” Do you agree with this statement? Why or why not?

9. Jane’s friend Averil says, “At some point, we all have to appreciate what our parents did give us and stop resenting what they couldn’t.” What do you think Walter was able to give his daughters? What do you think he failed to give them? In your own relationships with your parents or children, what has been given or withheld?

10. Fairy tales often feature encounters with strange folk who are not what they seem. What are some examples of these encounters in the novel? What do you think is the significance of each?

11. What memories do you have of puppets from your childhood?