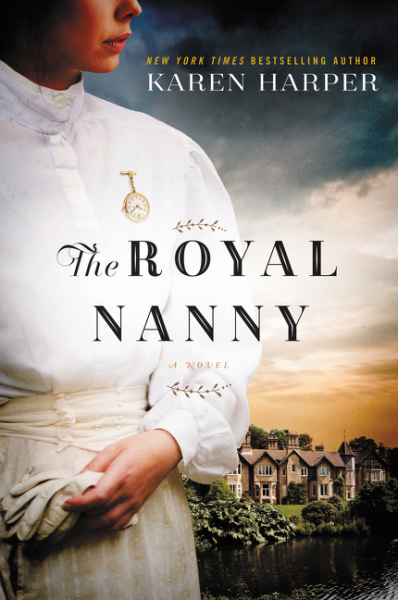 Based on a seldom-told true story, this novel is perfect for everyone who is fascinated by Britain’s royal family—a behind the scenes look into the nurseries of little princes and the foibles of big princes.

April, 1897: A young nanny arrives at Sandringham, ancestral estate of the Duke and Duchess of York. She is excited, exhausted—and about to meet royalty. . . .

So begins the unforgettable story of Charlotte Bill, who would care for a generation of royals as their parents never could. Neither Charlotte—LaLa, as her charges dub her—nor anyone else can predict that eldest sons David and Bertie will each one day be king.

Based on a seldom-told true story, this novel is perfect for everyone who is fascinated by Britain’s royal family—a behind the scenes look into the nurseries of little princes and the foibles of big princes.

April, 1897: A young nanny arrives at Sandringham, ancestral estate of the Duke and Duchess of York. She is excited, exhausted—and about to meet royalty. . . .

So begins the unforgettable story of Charlotte Bill, who would care for a generation of royals as their parents never could. Neither Charlotte—LaLa, as her charges dub her—nor anyone else can predict that eldest sons David and Bertie will each one day be king. LaLa knows only that these children, and the four who swiftly follow, need her steadfast loyalty and unconditional affection.

But the greatest impact on Charlotte’s life is made by a mere bud on the family tree: a misunderstood soul who will one day be known as the Lost Prince. Young Prince John needs all of Lala’s love—the kind of love his parents won’t…or can’t…show him.

From Britain’s old wealth to the glittering excesses of Tsarist Russia; from country cottages to royal yachts, and from nursery to ballroom, Charlotte Bill witnesses history. The Royal Nanny is a seamless blend of fact and fiction—an intensely intimate, yet epic tale spanning decades, continents, and divides that only love can cross.

New York Times and USA Today bestselling author Karen Harper is a former Ohio State University instructor and high school English teacher. Published since 1982, she writes contemporary suspense and historical novels about real British women. Two of her recent Tudor-era books were bestsellers in the UK and Russia. Harper won the Mary Higgins Clark Award for Dark Angel, and her novel Shattered Secrets was judged one of the best books of the year by Suspense Magazine.

“From cozy firesides of country houses to glittering halls of ancestral estates, Karen Harper gives the reader unprecedented access to a world of monarchs. Told through the eyes of an endearing narrator, The Royal Nanny is a gem, revealing that those forgotten in history are often the true treasures.” — Erika Robuck, national bestselling author of Hemingway's Girl

“This is a beautifully told novel of a woman who was surrounded by all the glitz and glamour of royalty but remained unaffected…Readers will greatly admire the protagonist while learning about the quirks of the royal family and the events that shook the world in the early 20th century.”

“Peels back the decades and pulls aside a protective veil of secrecy, helping us understand the forebears of Queen Elizabeth II, including her father, King George VI, of The King’s Speech fame. A compulsive, page-turning read that reveals both the gilt and the tarnish of the British Royal Crown.” — Sandra Byrd, author of Mist of Midnight

“…Beautifully depicts the world of the royal family through the eyes of a kind, loving woman who devoted her life to her young charges…It is the loving manner in which she explores the relationship between Lala and the children…that sweeps readers away. Harper at her best.” — Kathe Robin, RT Book Reviews

Do you think it is true that “The

hand that rocks the cradle rules

the world”? If so, why did the

upper-class ethic during the

allow servant women to rear their

young children? And what sort of

people did this practice produce?

How has that thinking changed

over the years to now?

Really, what is the definition of

“motherhood”? Is it strictly

biological or is it more?

A study of the royal Yorks/

Windsors reveals a lot about

the relationships of fathers to

their children. It’s obvious that

the dynamic between Prince Albert,

dysfunctional. Can you read

between the lines to say why?

And how would you assess the

relationships of George, Duke of

York, to his six children?

Likewise, the royal marriages of

May have unique arrangements. Is

this just because “the royals and very

rich are different,” is it the result

of arranged marriages, or is it just a

product of a stricter, different time?

Have you seen modern marriages

David, later king and Duke of

Windsor, is a fascinating study,

a man who gave up the throne for

“the woman he loved,” a twicedivorced

much wore the pants in their

with the strict and cruel nanny

really explain this, or is his family

to blame also for his later lack of

Many of us saw the movie The King’s

Speech. Does this book throw more

light on why Bertie stuttered and had

a bad digestive system? Yet where did

he find the strength to rule and take

the British nation through the trials

with Johnnie as best they could for

that era—or did they? Autism was

not known, and epilepsy was feared.

Did they handle their youngest child

As a reader, what do you think

of historical novels that are what

books that have fictional scenes

and dialogue and some invented

in a way a straight history book

Is it “better to have loved and lost,

than never to have loved at all”? Lala loses much in this story, but is

she better for having known, loved,

and helped those who have died?

Would you become a British royal

of these eras (or Russian royalty)

if you had the choice? (And for

the Russians, if you didn’t know the

revolution was coming?) Or would

royal family today? What are the

pros and cons of such a life?

Charlotte Bill and other nurses and

first “career women” who gave up

their own romantic and domestic

futures for their duty. Are they

caught between the past and the

future during this early “suffragette”

movement? Are they to be admired

There has recently been much

hunting and the overhunting of

species in general. How do you feel

about the massive number of game

birds killed by the upper class of this

era? Why do you think this sport

was such a passion?

As dreadful as World War I was for

the British (and others), did any

so many men being lost? How so?

Those of us who have enjoyed such

BBC series as Upstairs, Downstairs or Downton Abbey have had a

servant class at this time. Were

there both joys and sorrows,

triumphs as well as tragedies