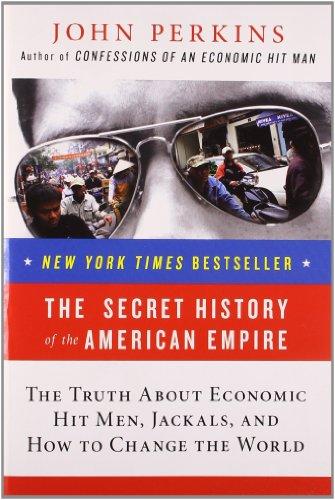 THE SECRET HISTORY OF THE AMERICAN EMPIRE

The Truth About Economic Hit Men, Jackals, and How to Change the World

The issues that John Perkins tackles in his new book, The Secret History of the American Empire, are both broader and more challenging than those described in his first bestseller, Confessions of an Economic Hit Man. Perkins makes an appeal for personal action by everyone who reads his book.

Perkins begins by explaining his motives for writing his first book and the reception it has enjoyed. He describes a book signing for Confessions in a Washington, D.C., bookstore, when two employees of the World Bank brought their sons to meet him and confessed that they often took part,

The issues that John Perkins tackles in his new book, The Secret History of the American Empire, are both broader and more challenging than those described in his first bestseller, Confessions of an Economic Hit Man. Perkins makes an appeal for personal action by everyone who reads his book.

Perkins begins by explaining his motives for writing his first book and the reception it has enjoyed. He describes a book signing for Confessions in a Washington, D.C., bookstore, when two employees of the World Bank brought their sons to meet him and confessed that they often took part, incognito, in protests against the bank’s policies. One of the bank’s employees said to Perkins, “We need more whistle-blowers like you.” The other advised him to write another book exposing the evil actions of the corporatocracy, and added, “And also give us hope. Offer our sons alternatives. Map out a way for them to do a better job.”

Perkins describes the seven characteristics of empires, and posits that the corporatocracy, which he defines as the individuals who control our businesses, governments, and media, are in fact an empire bent on exploiting the rest of the world for its own gains. He then details experiences he and other economic hit men and jackals (hired assassins) have had in four regions of the world—Asia, Latin America, the Middle East, and Africa—which he maintains demonstrate in no uncertain terms the greed and ruthlessness the corporatocracy practices in protecting its selfish interests, often at the expense of the citizens of those regions and the environment at large.

Despite the genuinely horrifying nature of many of the events Perkins describes, he remains optimistic about the possibility that conscientious individuals can help stop the corporatocracy’s domination of other cultures and its disregard of the planet’s environmental future. He explores how nongovernment organizations and nonprofit organizations worldwide are countering the actions of the corporatocracy, and provides a list of specific actions that individuals can take to thwart the corporatocracy and achieve a sustainable and peaceful world for all its citizens.

John Perkins is founder and president of the Dream Change Coalition, which works closely with Amazonian and other indigenous people to help preserve their environments and cultures. From 1971 to 1981 he worked for the international consulting firm of Chas. T. Main, where he became chief economist and director of economics and regional planning. Perkins has lectured and taught at universities and learning centers on four continents and is a regular lecturer for the Omega Center.

“A sweeping, bold assault on the tyranny of corporate globalization, full of drama and adventure, with devastating stories of greed run wild. But Perkins is undaunted, and offers imaginative ideas for a different world.” —Howard Zinn, author of A People’s History of the United States

“John Perkins’ new book is both an eye-opening expose of global corruption and a fascinating story of adventure and intrigue. This devastating indictment of current economic policies also offers hope by showing the power of the growing movement toward a caring economics worldwide.” —Riane Eisler, author of The Chalice and The Blade and The Real Wealth of Nations

Do you agree with Perkins’ statement that the corporatocracy is in fact an empire? If so, why? If not, why not?

Perkins’ characterization of Hugo Chavez, president of Venezuela, is markedly different from the way he has been depicted in the mainstream media. How do you account for these differences? Which, if either, characterization do you find more plausible? Why?

The United States’ war in Iraq is now in its fifth year. Perkins considers this war more dangerous to U.S. interests abroad than was the Vietnam war—he describes the Iraq war as a “clash of ideologies” rather than simply a regional conflict. What is your position on the Iraq war? Which, if any, of Perkins’ opinions on the subject do you find valid? Why?

Perkins contends that the Central Intelligence Agency and the National Security Agency, which report to the executive branch of the United States government, authorized and in some cases carried out a number of assassinations of democratically elected leaders in Latin America and Africa who had refused to allow the corporatocracy to continue to do business as usual. Do you believe that any of these allegations are true? If so, why? If not, why not?

Perkins says that foreign governments that decline to be intimidated by the corporatocracy are routinely labeled “communist” by the U.S. government. What purpose would using the word “communist” serve in this context?

He also contends that most such governments, particularly those in Latin America, are trying to ensure that their national resources are used to benefit their own citizens rather than foreign countries and businesses. Would you describe such actions as “communistic”? Regardless of how they are labeled, do you believe that the resources of foreign countries should be fair game for acquisition by those with the most money and/or political clout?

Perkins says that the increased number of democratically elected leaders in Latin America who are systematically opposing the corporatocracy is proof that nations need not bow to foreign exploitation. What is your view on the subject?

Perkins charges that international corporations such as Nike are responsible for making the lives of sweatshop workers miserable. He cites the work of documentary filmmakers who have lived in the same conditions as Indonesian workers as proof. Do you think such information is valid? If so, how will it affect you personally?

Which of the incidents that Perkins describes in his book do you find the most disturbing? Why?

Several places in the book, Perkins states that male domination of the corporatocracy leads to its indiscriminate raping and pillaging of Third World cultures and the environment. On page 69, he describes the attitudes of the Shuar people of the Amazon, who believe that men are responsible for hunting, gathering firewood, and protecting their people from threatening tribes, and women are responsible for raising children, growing crops, looking after the home, and telling the men when they need to stop what they are doing. Do you think that giving women more say in running corporations, governments, and the media would improve the quality of life for the planet’s inhabitants? Why or why not?

Perkins ends his book with a list of actions individuals can take to thwart the corporatocracy and bring about a more just and peaceful world. Interestingly, most of the items on his list are also recommended by organizations that strive to protect the environment and produce sustainable energy and agricultural resources. Why do you suppose this is so? What, if any, of the actions Perkins lists are you prepared to undertake yourself? Why?