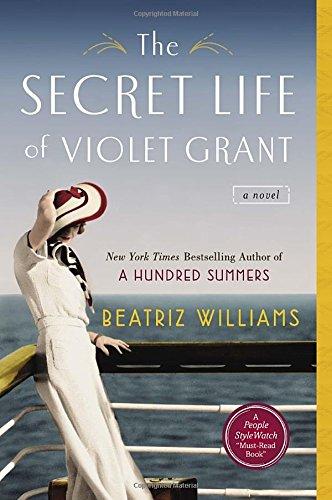 THE SECRET LIFE OF VIOLET GRANT

Manhattan, 1964. Vivian Schuyler, newly graduated from Bryn Mawr College, has recently defied the privilege of her storied old Fifth Avenue family to do the unthinkable for a budding Kennedy-era socialite: break into the Madison Avenue world of razor-stylish Metropolitan magazine. But when she receives a bulky overseas parcel in the mail, the unexpected contents draw her inexorably back into her family’s past, and the hushed-over crime passionnel of an aunt she never knew, whose existence has been wiped from the record of history.

Manhattan, 1964. Vivian Schuyler, newly graduated from Bryn Mawr College, has recently defied the privilege of her storied old Fifth Avenue family to do the unthinkable for a budding Kennedy-era socialite: break into the Madison Avenue world of razor-stylish Metropolitan magazine. But when she receives a bulky overseas parcel in the mail, the unexpected contents draw her inexorably back into her family’s past, and the hushed-over crime passionnel of an aunt she never knew, whose existence has been wiped from the record of history.

Berlin, 1914. Violet Schuyler Grant endures her marriage to the philandering and decades-older scientist Dr. Walter Grant for one reason: for all his faults, he provides the necessary support to her liminal position as a young American female physicist in prewar Germany. The arrival of Dr. Grant’s magnetic former student at the beginning of Europe’s fateful summer interrupts this delicate détente. Lionel Richardson, a captain in the British Army, challenges Violet to escape her husband’s perverse hold, and as the world edges into war and Lionel’s shocking true motives become evident, Violet is tempted to take the ultimate step to set herself free and seek a life of her own conviction with a man whose cause is as audacious as her own.

As the iridescent and fractured Vivian digs deeper into her aunt’s past and the mystery of her ultimate fate, Violet’s story of determination and desire unfolds, shedding light on the darkness of her years abroad . . . and teaching Vivian to reach forward with grace for the ambitious future–and the love–she wants most.

Beatriz Williams lives with her husband and children in Greenwich, Connecticut. She is the author of A Hundred Summers and Overseas.

“Another substantive beach read steeped in history and familial intrigue…Readers will love wallowing in the twists and turns of this irresistibly luxurious tale.” —Booklist

“A story of passion, redemption and a battered suitcase full of mysteries.” —Greenwich Time

“Another absorbing page-turner filled with romance and secrets.” —Library Journal

Vivian Schuyler’s and Violet Grant’s stories are separated by fifty years. They each pursued very different career paths, yet both women had similar ambitions and faced a surprising number of similar challenges and obstacles. Discuss the similarities and differences in their professional goals, how they pursued those goals, and how they overcame obstacles along the way. What about similarities in their personal lives?

It has been fifty years since Vivian found out about Violet, her great-aunt. How do modern women’s experiences measure up to Vivian’s? To Violet’s?

The meaning and context of love plays a central role The Secret Life of Violet Grant, which touches on romantic, platonic, and familial love, and even delves into the dynamics of abuse. Discuss different examples of love and how it functions-or fails to function-in the context of the characters’ lives.

Why do you think Vivian was immediately drawn so strongly to Violet’s story?

Discuss Vivian’s friendship with Gogo. How does this relationship affect both women? How does it change by the end of the book? Does it matter that it was rooted in Vivian’s determination to work at the Metropolitan? Do you think Vivian and Gogo will remain friends?

Does this friendship bear any similarities to that between Violet and the Comtesse de Saint-Honoré?

Early on, Lionel Richardson expresses a sentiment about women voting-only “sensible” women should vote. As appalling as his behavior is, Walter Grant actually disagrees with this opinion and expresses support for Violet’s ambitions and women’s rights in general. Compare and contrast Lionel and Walter in this regard. How do their actions measure up to their words?

Discuss Vivian’s relationship with her family-how she does and doesn’t fit in with the Schuylers? In light of the tension between them all, why do you think family is still important to her?

Though we don’t see it, Violet’s relationship with the Schuylers was clearly much more fraught. Do you think family was still important to her? Why or why not?

The Greenwalds (from A Hundred Summers) make an appearance in The Secret Life of Violet Grant. Discuss how they fit in with and compare to the Schuylers.

At one point, Vivian’s sister Pepper says, “I think the secret to marriage is just old-fashioned tolerance.” Do you agree? What role do you think this sentiment plays in their parents’ marriage? Why do they stay together, despite the cracks in the relationship and the readier acceptance of divorce among the upper classes of the period? How about the other couples in the book?

Demands for obedience are ever present in Violet’s life, especially in the areas of family, work, and romance. How does she confront them?

Vivian is much more outspoken and boisterous than her great-aunt. How does she confront similar demands and social strictures? How does her approach compare to Violet’s?