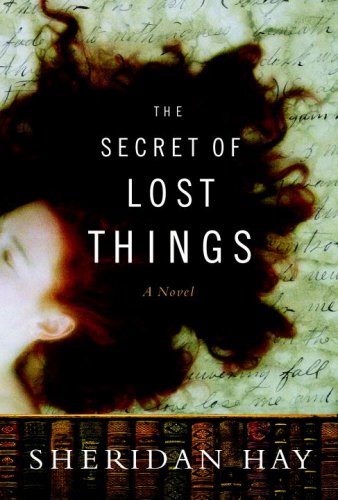 THE SECRET OF LOST THINGS

In this charming novel about the eccentricities and passions of booksellers and collectors, a captivating young Australian woman takes a job at a vast, chaotic emporium of used and rare books in New York City and finds herself caught up in the search for a lost Melville manuscript.

Eighteen years old and completely alone, Rosemary arrives in New York from Tasmania with little more than her love of books and an eagerness to explore the city she’s read so much about. She begins her memorable search for independence with appealing enthusiasm, and the moment she steps into the Arcade bookstore,

In this charming novel about the eccentricities and passions of booksellers and collectors, a captivating young Australian woman takes a job at a vast, chaotic emporium of used and rare books in New York City and finds herself caught up in the search for a lost Melville manuscript.

Eighteen years old and completely alone, Rosemary arrives in New York from Tasmania with little more than her love of books and an eagerness to explore the city she’s read so much about. She begins her memorable search for independence with appealing enthusiasm, and the moment she steps into the Arcade bookstore, she knows she has found a home. The gruff owner, Mr. Pike, gives her a job sorting through huge piles of books and helping the rest of the staff—a group as odd and idiosyncratic as the characters in a Dickens novel. There’s Pearl, the loving, motherly transsexual who runs the cash register; Oscar, who organizes the nonfiction section and shares his extensive, eclectic knowledge with Rosemary, but furiously rejects her attempts at a more personal relationship; and Arthur Pick, who supervises the art section and demonstrates a particular interest in photography books featuring naked men.

The store manager, Walter Geist, is a lonely figure even within the world of the Arcade. When Walter’s eyesight begins to fail, Rosemary becomes his assistant. And so it is Rosemary who first reads the letter from someone seeking to “place” a lost manuscript by Herman Melville. Mentioned in Melville’s personal correspondence but never published, the work is of inestimable value, and proof of its existence brings the simmering ambitions and rivalries of the Arcade staff to a boiling point.

Including actual correspondence by Melville, The Secret of Lost Things is at once a literary adventure that captures the excitement of discovering a long-lost manuscript by a towering American writer and an evocative portrait of life in a surprisingly colorful bookstore.

Sheridan Hay worked in bookstores and in trade publishing both in her native Australia and in New York. She holds an MFA in writing and literature from Bennington, and has lived in New York for twenty years

“A brilliant version of the coming-to-adulthood-in-Manhattan story with a page-turner of a plot about a lost manuscript for which the people around the charming heroine are willing to do very nasty things. But beneath all the action, the theme of lost homes becomes ever more delicately insistent. Pacy, confident, and beautifully written, Lost Things satisfies on every level.” —Nuala O’Faolain, #1 bestselling author of Are You Somebody?

“I loved The Secret of Lost Things. I loved the Arcade bookstore and the characters Sheridan Hay has created to occupy it. They are all a bit mad and very alive in this intriguing and hugely entertaining novel.” —Roddy Doyle, Booker Prize–winning author of Paddy Clarke Ha Ha Ha

“This is a book about bookishness, the presence of the past. Herman Melville’s great ghost haunts the precincts of a bookstore, and the tale of those who hunt for him becomes both a kind of whodunit and a story of coming-of-age. Sheridan Hay peoples her canvas with characters both rare and strange, and there’s a page-turning intensity to her heroine’s quest after true love and truth. With The Secret of Lost Things, a genuine new artist has been found.” —Nicholas Delbanco, author of Spring and Fall

“Sheridan Hay gives us New York in fresh snow, mother-memories in a box, a bookstore worthy of an opera, the rumblings and fumblings of desire, and a story stoked by (of all people!) Herman Melville—delivered in a voice at once wryly smart and truthfully sorrowing. How not to be won over?” —Martha Cooley, author of The Archivist

In the novel’s opening pages, Rosemary tells us she was born on Anzac Day, commemorating the death of soldiers from the Australian and New Zealand Army Corps at Gallipoli. How is she affected by knowing this? What does April 25 signify in both the opening and closing chapters?

What transformations take place between each of the book’s four sections? How did your impressions of Rosemary change throughout the novel?

What motivated Chaps to send Rosemary to New York? In what ways was she different from Rosemary’s mother? Which friends become Rosemary’s “foster mothers” after she travels to New York?

Discuss the dynamics of the Arcade’s employees. What is the nature of the antagonism between Robert Mitchell and George Pike? What is Walter Geist’s role in that triangle? What role does memory play in the operation of the Arcade?

What does Pearl teach Rosemary about being a woman? In Pearl’s eyes, what differences exist between the way men and women behave? How does Rosemary react to the many points of view about gender and sex she encounters in her new city?

In what way is Moby Dick an effective choice in metaphor for this novel? How does Rosemary survive her voyage?

What observations are made about power and love throughout The Secret of Lost Things? What is the nature of Geist’s infatuation with Rosemary? What does Rosemary discover about negotiating desire when Oscar rejects her?

How do money and integrity shape Rosemary’s fate? What is a “gift” and what is an “obligation”? How do collectors like Julian Peabody, and known thieves like Redburn, influence the value of creative works?

Discuss the underlined portions of W. H. Auden’s poetry that Rosemary discovers near the end of chapter sixteen. If the book had indeed been left as a message for her, what was the implication (and the reality) of the line “All we are not stares back at what we are,” which was drawn from Auden’s poetic homage to The Tempest?

How do Rosemary and Lillian face the loss of a beloved relative and the loss of a homeland differently? How have these losses shaped their attitudes toward life?

What did you believe about The Isle of the Cross? Besides literal blindness, what other types of impaired vision make humans vulnerable to being duped? Who (or what) was responsible for Geist’s death?

Do you agree with Chaps’s statement in the opening scenes when she tells Rosemary’s mother that “books aren’t lumps of paper but minds on shelves. After all, hats aren’t books—people don’t need them”? What is it about the commodity of used books that makes the Arcade special? Is there a book that ‘changed’ you?

Whether within a city or across an ocean, which moves were the most significant ones in your life? Is there a faraway place you dream of, as Rosemary dreamed of Manhattan? Have you ever had Rosemary’s experience of creating an entirely new life for yourself?

Ultimately, what is the secret of lost things? How can we regain what we lose, or cope with never finding them again? What sorts of things, or people or emotions, are lost and found in the novel? Which secrets were destructive, and which were necessary?