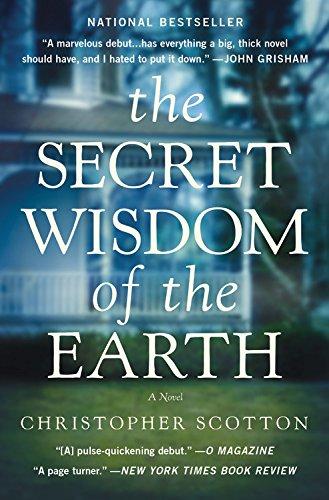 THE SECRET WISDOM OF THE EARTH

After seeing the death of his younger brother in a terrible home accident, fourteen-year-old Kevin and his grieving mother are sent to live with Kevin’s grandfather. In this peeled-paint coal town deep in Appalachia, Kevin quickly falls in with a half-wild hollow kid named Buzzy Fink who schools him in the mysteries and magnificence of the woods.

Determined to stop the massive mountaintop removal operation that is plundering the town’s heritage, Kevin’s grandfather attempts to rally the citizens against the “company” and its powerful owner. When Buzzy witnesses a brutal hate crime, a sequence is set in play that tests Buzzy and Kevin to their absolute limits in a struggle for survival in the Kentucky mountains.

After seeing the death of his younger brother in a terrible home accident, fourteen-year-old Kevin and his grieving mother are sent to live with Kevin’s grandfather. In this peeled-paint coal town deep in Appalachia, Kevin quickly falls in with a half-wild hollow kid named Buzzy Fink who schools him in the mysteries and magnificence of the woods.

Determined to stop the massive mountaintop removal operation that is plundering the town’s heritage, Kevin’s grandfather attempts to rally the citizens against the “company” and its powerful owner. When Buzzy witnesses a brutal hate crime, a sequence is set in play that tests Buzzy and Kevin to their absolute limits in a struggle for survival in the Kentucky mountains.

Christopher Scotton has been a carpenter, bouncer, kite flyer, amusement park ride operator, and CEO of a few technology companies. This is his first novel.

“A marvelous debut novel by Christopher Scotton. The setting, in the coal country of Appalachia, is rich in history and lore and tragedy. A young teenager comes of age under the wise counsel of his grandfather. An ugly murder haunts a small town. The story has everything…I hated to put it down.”—John Grisham

“A big, old-fashioned yarn well worth the telling.”—USA Today

How did your view of what happened to Joshua (and, subsequently, what happened to Kevin and the rest of his family) change as it was gradually revealed exactly how he died and how his death affected each member of the family?

Kevin is withdrawn, angry and wracked with guilt when he arrives in Medgar. How does Pops make Kevin feel comfortable in his home away from home? How does Pops’ influence in particular change Kevin as a person?

Describe Buzzy’s relationship with Cleo. How did each brother view the other? What were the different ways that each of them were tested, and how did they each end up ultimately?

Pops works with animals and grew up on the land he continued to live on, while Buzzy knows all about the forest and the ways its inhabitants can help humans. How are their relationships with nature different from Kevin’s? How is Kevin’s understanding of land and nature changed by the end?

Is it possible for Joshua’s accident to have been Kevin’s fault, even partially? How would you feel in Kevin’s place? In his parents’ place?

Why was Paul’s reveal of his homosexuality — a fact that almost everyone knew — such a shock at the town meeting?

Pops describes the Budget family as “different.” What role do they play in the community of Medgar? How does Tilroy fit in with his family at the beginning of the novel, and how does his death change the family in the end?

How do class and financial status shape the different inhabitants of Medgar? Discuss the meaning of quotes such as the following one from Pops about Buzzy’s family: “The Finks are poor, but they’re proud poor. Esmer runs the Hollow hard. Kids stay in school, they truck their garbage out once a week. These are solid people.”

Compare the attitude toward Paul and Paitsel at the meeting the night before Paul’s beating (“We can’t be havin this kinda sick, Satan devil cancer in our town”) and the conversations Kevin heard from all different townspeople regarding Paul days later (“Uncommon generous. No better man in town, I say”). How do those two different perspectives get pulled back and forth, both in the town and in Kevin’s mind?

Pops physically punished Bubba Boyd for speaking ill of Sarah: “The fury that exploded and the speed with which it arrived frightened me — it was as if a raging magma, held down for so long by rearing and position ruptured its vessel and spewed forth in an overpowering surge.” How does this capacity to become enraged fit with the rest of Pops’ character?

Describe the turmoil that Buzzy suffered between when he witnessed the attack on Paul and when he finally confessed to Kevin. What would you have done in his place?

When Buzzy got an A in school, his father’s reaction was surprising to Kevin: “Buzzy the Brain, gonna live above his rearin.” Why would a parent react like that? What did that statement make Kevin realize about the truth of living in the hollow?

“It’s like you own the universe.” Why did Tilroy attack Paul?

Pops tells the boys about the magic and power he felt after climbing Red Cloud, a feeling he compares to theirs upon climbing Old Blue on their tramp, and Kevin feels he understands the new knowledge: “Yesterday was the hardest thing I’ve ever done in my life. The whole day was a test. I know I can do harder things, now.” What other experiences in the story brought out similar reactions in Kevin and Buzzy? Do you think that the “magic” of Red Cloud or the white stag can really exist?

How did the difficult and daring rescue of Pops help Kevin (and Buzzy) complete his summer transformation from boy to man?

Kevin finds a moment of connection and empathy when he considers Tilroy’s body for a final time: “I stayed for just a moment more and thought about my own father; how I still wanted his approval, still craved his love, still drank up drops of attention. I considered the shell of Tilroy one last time and pondered the certainty of rearing; the inevitability of desire; and the turn life takes when the two are set hard against.” How was he able to call up understanding for this troubled young man who violently killed a good man and shot Kevin’s own grandfather and friend? How would you have felt in Kevin’s place?

Considering what happened by the end of the summer to all the different characters—Kevin and his family, Buzzy and his, Tilroy and his, Paul and Paitsel—do you find everyone’s transformations (or lack of) satisfying? Why or why not?

Kevin and Buzzy have changed since they became fast friends the summer that Kevin moved to Medgar. Buzzy expresses his envy of Kevin and the life he always knew Kevin would have, even when they were young. What kept the boys so close together during their teenage years, and why have they grown up to have such dissimilar lives? Do you think either of them could have done anything to maintain their close relationship?

The lingering effects of violence are an important theme in the novel. How does the violence done to the mountains serve as an allegory for the violence perpetrated by and done to characters in the novel?