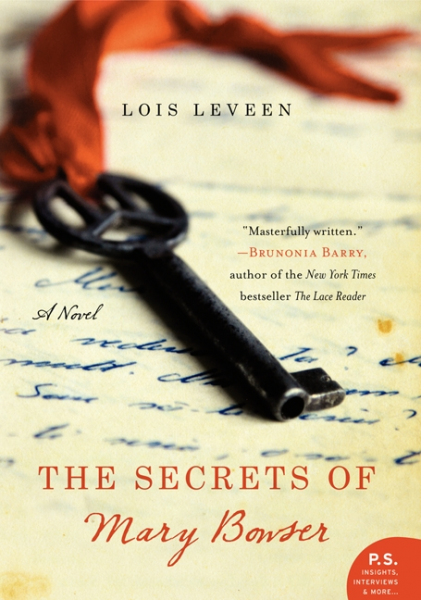 THE SECRETS OF MARY BOWSER

Based on a remarkable true story, The Secrets of Mary Bowser is an inspiring tale of one daring woman’s willingness to sacrifice her own freedom to change the course of history.

All her life, Mary has been a slave to the wealthy Van Lew family of Richmond, Virginia. But when Bet, the willful Van Lew daughter, decides to send Mary to Philadelphia to be educated, she must leave her family to seize her freedom.

Life in the North brings new friendships, a courtship, and a far different education than Mary ever expected, one that leads her into the heart of the abolition movement.

Based on a remarkable true story, The Secrets of Mary Bowser is an inspiring tale of one daring woman’s willingness to sacrifice her own freedom to change the course of history.

All her life, Mary has been a slave to the wealthy Van Lew family of Richmond, Virginia. But when Bet, the willful Van Lew daughter, decides to send Mary to Philadelphia to be educated, she must leave her family to seize her freedom.

Life in the North brings new friendships, a courtship, and a far different education than Mary ever expected, one that leads her into the heart of the abolition movement. With the nation edging toward war, she defies Virginia law by returning to Richmond to care for her ailing father—and to fight for emancipation. Posing as a slave in the Confederate White House in order to spy on President Jefferson Davis, Mary deceives even those who are closest to her to aid the Union command.

Just when it seems that all her courageous gambles to end slavery will pay off, Mary discovers that everything comes at a cost—even freedom.

Award-winning author Lois Leveen‘s work has appeared in the New York Times, on NPR, and in literary journals and anthologies. A former faculty member at UCLA and Reed College, she lives in Portland, Oregon.

“Masterfully written, The Secrets of Mary Bowser shines a new light onto our country’s darkest history. Balancing fire and grace, the story of Mary Bowser is an ethical journey we won’t soon forget, one that takes us from hatred to courage to love.”—Brunonia Barry, bestselling author of The Lace Reader and The Map of True Places

"Packed with drama, intrigue, love, loss, and most of all, the resilience of a remarkable heroine….What a treat."—Kelly O’Connor McNees, author of The Lost Summer of Louisa May Alcott

“Told with clarity, confidence, and courage, The Secrets of Mary Bowser illuminates an untold and important story about slavery, the Civil War, and the role of women in achieving emancipation. A riveting and powerful book.”—Naseem Rakha, Author of The Crying Tree

The novel opens with two epigrams, one from Ralph Waldo Emerson and the other from Maria Stewart. What specific aspects of Mary’s life confirm Emerson’s belief that all of history is in one person, and that each person’s life reflects national crises? Stewart, who was herself a black abolitionist, wondered if a woman might be the one to end slavery. In what ways does being female allow Mary and Bet to take on their great roles in history?

Often when we think of slavery, we think of plantations. How does slavery in Richmond differ from plantation slavery? How is it similar? What did you find most surprising about the lives of slaves and of free blacks in Richmond?

Though both of Mary’s parents were born in slavery, their experiences of slavery were quite different: her mother was raised in New York, was taught to read, and worked as a house slave; her father was born on a plantation and performed skilled labor at the smithy. How do these differences shape the characters?

When Bet frees her slaves, Mary and her parents face a difficult choice because of Virginia law. Was Bet being selfish and headstrong when she chose to emancipate the Van Lew slaves without considering how being forced out of the community would affect them? Or was she doing the right thing by letting Mary’s family and the other freed slaves decide on their own what to do?

Mary knows almost nothing about what Northern life is like when her parents decide to send her to Pennsylvania. What are the biggest surprises for Mary—and for you as a reader—about life in Philadelphia in the decade before the Civil War?

When we read the novel, we already know that during the war Lincoln signs the Emancipation Proclamation, and that after the Union victory, all the slaves become free. But Mary chooses to walk back into slavery without knowing for sure that these things will happen. Why does she make this choice? How does living free in Philadelphia shape her willingness to return to slavery in Richmond?

The Civil War was the bloodiest conflict in American history. The violence that marked the era erupts in very personal ways at numerous points in the novel: when Mary learns the story of the fugitive slave whom she and McNiven transport to New Jersey; when the Philadelphia abolitionists respond to John Brown’s raid on Harper’s Ferry; when Mary and Wilson learn about McNiven’s participation in planning the explosion at the Confederate ammunition factory; and when a Confederate soldier threatens Bet’s life. Ultimately, what do you think about the use of violence to right a deep wrong, such as slavery? Is it always justified, never justified, or, if it depends on the circumstances, what sort of circumstances justify intentionally killing someone else?

Mary admits to Wilson that she feels responsible for her father’s death. Do you agree? Was she wrong to stay in Richmond to continue her spying rather than saving her only blood relative?

Mary’s mother is certain that Jesus has a plan for her daughter. At times, Mary seems to share this belief, but at other times she doubts it. Wilson says her spying is the right thing to do, regardless. Do you think it matters whether Mary is choosing for herself to be a spy or whether she is fulfilling a plan that someone else—her mother, Bet, McNiven, or even Jesus—has for her?

Theodore and Wilson are very different. What attracts Mary to each of them? What attracts them to her? Do you see ways that her experience of being courted by Theodore affects her relationship with Wilson?

Over the course of the novel, Mary learns to trust a series of white people: Zinnie Moore, Thomas McNiven, Bet Van Lew, and Bet’s mother. What are the qualities that Mary finds easiest to trust in each, and what are the things that challenge her trust? Why does she need to learn to rely on people who are so different from each other as well as from her? What does each of these characters learn from Mary?

The American playwright Eugene O’Neill wrote, “The past is the present, isn’t it? It’s the future, too.” What does America today share with the past depicted in the novel? Do slavery and the Civil War still affect us?