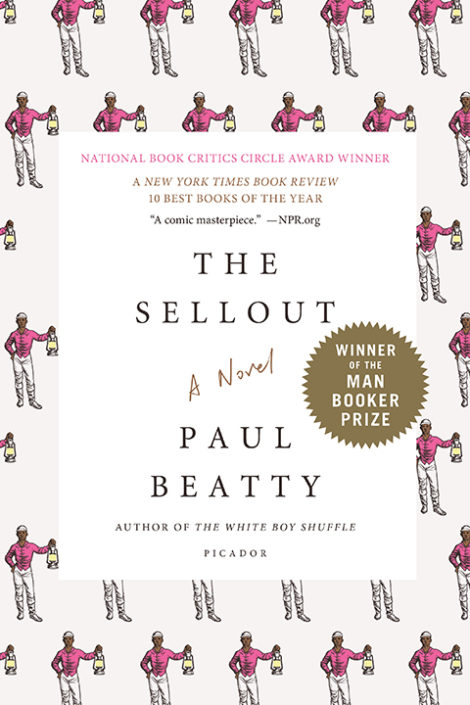 A biting satire about a young man’s isolated upbringing and the race trial that sends him to the Supreme Court, Paul Beatty’s The Sellout showcases a comic genius at the top of his game. It challenges the sacred tenets of the United States Constitution, urban life, the civil rights movement, the father-son relationship, and the holy grail of racial equality—the black Chinese restaurant.

Born in the “agrarian ghetto” of Dickens—on the southern outskirts of Los Angeles—the narrator of The Sellout resigns himself to the fate of lower-middle-class Californians: “I’d die in the same bedroom I’d grown up in,

A biting satire about a young man’s isolated upbringing and the race trial that sends him to the Supreme Court, Paul Beatty’s The Sellout showcases a comic genius at the top of his game. It challenges the sacred tenets of the United States Constitution, urban life, the civil rights movement, the father-son relationship, and the holy grail of racial equality—the black Chinese restaurant.

Born in the “agrarian ghetto” of Dickens—on the southern outskirts of Los Angeles—the narrator of The Sellout resigns himself to the fate of lower-middle-class Californians: “I’d die in the same bedroom I’d grown up in, looking up at the cracks in the stucco ceiling that’ve been there since ’68 quake.” Raised by a single father, a controversial sociologist, he spent his childhood as the subject in racially charged psychological studies. He is led to believe that his father’s pioneering work will result in a memoir that will solve his family’s financial woes. But when his father is killed in a police shoot-out, he realizes there never was a memoir. All that’s left is the bill for a drive-thru funeral.

Fueled by this deceit and the general disrepair of his hometown, the narrator sets out to right another wrong: Dickens has literally been removed from the map to save California from further embarrassment. Enlisting the help of the town’s most famous resident—the last surviving Little Rascal, Hominy Jenkins—he initiates the most outrageous action conceivable: reinstating slavery and segregating the local high school, which lands him in the Supreme Court. 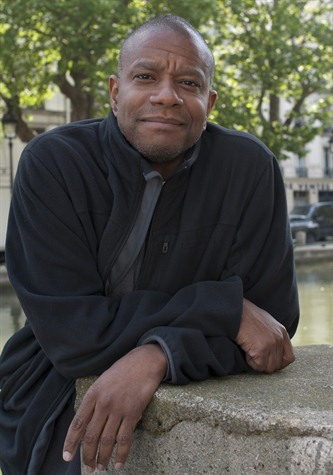 Paul Beatty is the author of three novels—Slumberland, Tuff, and The White Boy Shuffle—and two books of poetry: Big Bank Take Little Bank and Joker, Joker, Deuce. He is the editor of Hokum: An Anthology of African-American Humor. In 2016, he became the first American to win the Man Booker Prize. He lives in New York City.

Winner of the Man Booker Prize
Winner of the National Book Critics Circle Award in Fiction
Winner of the John Dos Passos Prize for Literature
Named One of the 10 Best Books of the Year by The New York Times Book Review
Named a Best Book of the Year by Newsweek, The Denver Post, BuzzFeed, Kirkus Reviews, and Publishers Weekly
Named a “Must-Read” by Flavorwire and New York Magazine’s “Vulture” Blog

“The first 100 pages of [Paul Beatty’s] new novel, The Sellout, are the most caustic and the most badass first 100 pages of an American novel I’ve read in at least a decade. I gave up underlining the killer bits because my arm began to hurt . . . [They] read like the most concussive monologues and interviews of Chris Rock, Richard Pryor and Dave Chappelle wrapped in a satirical yet surprisingly delicate literary and historical sensibility . . . The jokes come up through your spleen . . . The riffs don’t stop coming in this landmark and deeply aware comic novel . . . [It] puts you down in a place that’s miles from where it picked you up.” —Dwight Garner, The New York Times

“[The Sellout] is among the most important and difficult American novels written in the 21st century . . . It is a bruising novel that readers will likely never forget.” —Kiese Laymon, Los Angeles Times

“The Sellout isn’t just one of the most hilarious American novels in years, it also might be the first truly great satirical novel of the century . . . [It] is a comic masterpiece, but it’s much more than just that-it’s one of the smartest and most honest reflections on race and identity in America in a very long time.” —Michael Schaub, NPR.org

1. If you were a Supreme Court justice hearing the case of Me v. The United States of America, how would you rule? What does Hampton Fiske, the narrator’s attorney (“Don’t say shit! Don’t run! Don’t resist arrest!”), ultimately prove about America’s attempts to legislate life?

2. Did you laugh or cry (or both) at the experiments run by F. K. Me, the narrator’s psychologist/social scientist dad? Does your experience of the world support his three-stage Theory of Quintessential Blackness, summarized in Fiske’s closing monologue?

3. Does the concept of a ledger, designed to keep track of who owes a debt and who is entitled to receive a payment, accurately reflect the history of humanity in America? When Foy Cheshire calls the narrator a sellout on page 98, what is he saying was sold? Who were the buyers?

4. Marpessa calls the narrator Bonbon, a lightweight nickname that emerged when he was competing in a spelling bee at age 11 (page 124). Is she tougher than he is? Besides the bus, what else does she control? Would The Sellout be very different if it were narrated by a black woman?

6. How does the cover art (an illustration of a lawn jockey) summarize the narrator’s core conflict?

7. How did you react when the narrator created Dickens’s boundary lines (page 99), and Marpessa ejected strangers from the bus (page 134, taking her cue from George Wallace’s “Segregation Now” gubernatorial inauguration speech)?

8. Why does Hominy want to be the narrator’s slave? Even though he calls Bonbon “massa,” is Hominy ultimately his own master now that he has been emancipated by the entertainment industry?

9. Paul Beatty has said that he isn’t comfortable with labeling The Sellout a satire; many of the novel’s cartoonish elements are steeped in realism (for example, Beatty’s inspiration for the Dickens charter was a list of actual deed restrictions from the Richland Farms section of Compton, which was zoned for agriculture). How does Beatty use tragicomedy to bring reality and absurdity into focus?

10. On page 274, the beautiful Supreme Court Justice from the Upper West Side asks her colleagues to consider what the words “separate” “equal,” and “black” really mean. How would you answer her? Do your answers explain the shooting of Bonbon’s father?

11. Paul Beatty is the first American to win the Man Booker Prize (which in 2014 was opened to any book written in English and published by a British publisher). Affirmed by a panel of British judges, does the novel deliver a universal message? Or is it exclusively a book about American strife?

12. Most canonical novels that explore race in America are either set in the South or in New York City. How does The Sellout’s backdrop of Los Angeles change the conversation?

15. In the closing chapter, appropriately titled “Closure,” as Foy and the narrator debate whether the U.S. finally paid off its debts when “the black dude was inaugurated,” why isn’t Foy able to consider the plight of other non-white populations? Will it ever be possible for race to not matter in America?

16. In Paul Beatty’s previous novels and poetry, what is unique about the way he sees the world, and the words he uses to draw us in?