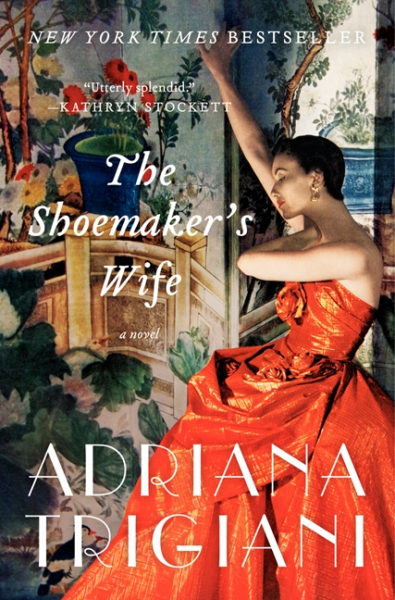 The majestic and haunting beauty of the Italian Alps is the setting of the first meeting of Enza, a practical beauty, and Ciro, a strapping mountain boy, who meet as teenagers, despite growing up in villages just a few miles apart. At the turn of the last century, when Ciro catches the local priest in a scandal, he is banished from his village and sent to hide in America as an apprentice to a shoemaker in Little Italy. Without explanation, he leaves a bereft Enza behind. Soon, Enza's family faces disaster and she, too, is forced to go to America with her father to secure their future.

The majestic and haunting beauty of the Italian Alps is the setting of the first meeting of Enza, a practical beauty, and Ciro, a strapping mountain boy, who meet as teenagers, despite growing up in villages just a few miles apart. At the turn of the last century, when Ciro catches the local priest in a scandal, he is banished from his village and sent to hide in America as an apprentice to a shoemaker in Little Italy. Without explanation, he leaves a bereft Enza behind. Soon, Enza's family faces disaster and she, too, is forced to go to America with her father to secure their future.

Unbeknownst to one another, they both build fledgling lives in America, Ciro masters shoemaking and Enza takes a factory job in Hoboken until fate intervenes and reunites them. But it is too late: Ciro has volunteered to serve in World War I and Enza, determined to forge a life without him, begins her impressive career as a seamstress at the Metropolitan Opera House that will sweep her into the glamorous salons of Manhattan and into the life of the international singing sensation, Enrico Caruso.

From the stately mansions of Carnegie Hill, to the cobblestone streets of Little Italy, over the perilous cliffs of northern Italy, to the white-capped lakes of northern Minnesota, these star-crossed lovers meet and separate, until, finally, the power of their love changes both of their lives forever.

Lush and evocative, told in tantalizing detail and enriched with lovable, unforgettable characters, The Shoemaker's Wife is a portrait of the times, the places and the people who defined the immigrant experience, claiming their portion of the American dream with ambition and resolve, cutting it to fit their needs like the finest Italian silk.

Bestselling author Adriana Trigiani is beloved by millions of readers around the world for her hilarious and heartwarming novels. Adriana was raised in a small coal-mining town in southwest Virginia in a big Italian family. She chose her hometown for the setting and title of her debut novel, the critically acclaimed bestseller Big Stone Gap. The heartwarming story continues in the novel’s sequels Big Cherry Holler, Milk Glass Moon, and Home to Big Stone Gap. Stand-alone novels Lucia, Lucia; The Queen of the Big Time; and Rococo, all topped the bestseller lists, as did Trigiani’s 2009 Very Valentine and its 2010 sequel Brava, Valentine.

“You don’t need to have an immigrant family history to adore this novel — it ranks as one of Trigiani’s very best. You only need a deep appreciation for exquisite writing and a story enriched by the power of abiding love.”—USA Today

“The breathtaking novel spans time and place… [It] sparkles in exquisite details and vivid description, showcasing rustic life in the snow capped mountain villages of Italy, the glittering and bustling glamor of New York City, to a quaint town in Minnesota.”— Julie A. Carlson, The Huffington Post

“Can we add in another quote, looks like there may be room? If so, please add: “I don’t know how Adriana goes into her family’s attic and emerges with these amazing stories, I’m just happy she does. If you’re meeting her work for the first time, get ready for a lifelong love affair. The Shoemaker’s Wife is utterly splendid.”— Kathryn Stockett, #1 New York Times bestselling author

How would the course of both Ciro's and Enza's lives have been different if they hadn't gone to America? Do you think they would have ended up together if they had stayed on the mountain?

Enza and Ciro shared their first kiss beside Stella's grave. In what ways did digging the grave open up Ciro's heart?

When Ciro opened up his duffle bag on the ship to America, “the fragrance of the convent laundry—lavender and starch—enveloped him, fresh as the mountain air of Vilminore” (p. 120). What other aspects of convent life stayed with Ciro and Eduardo after they left? What did they learn from the sisters?

Enza “found a best friend in Laura, but so much more” (p. 195). What do you think made Laura and Enza's bond so deep from the beginning? In what ways did they support one another?

Did anything surprise you about the characterization of Enrico Caruso? How would you describe his relationship with those around him? How did the time he spent with Enza and Laura affect them, even decades later?

How does The Shoemaker's Wife portray the immigrant experience? Do any of your own families have a similar immigrant history? Did they have a different experience?

Enza and Ciro have different views of religion. In what ways do their beliefs shape their actions and relationship?

How do you think Enza's life would have turned out if she had married Vito? If Ciro had married Felicitá? What did Vito and Felicitá offer them and what did they lack?

Carlo Lazzari warned Eduardo to “beware the things of this world that can mean everything or nothing”. In what ways did this advice ring true throughout the novel?

What effect did fighting in the Great War have on Ciro? Do you believe he returned to Manhattan a changed man, or did the war just force him to acknowledge what he had known all along?

Enza once said to Ciro: “I remind you, I imagine, of things you'd rather not think about.” What do you believe Enza meant by this? What challenges did Ciro and Enza face in their relationship? How did they differ in their ways of communicating?

At the end of the novel, Enza agrees to return to Italy with Antonio and Angela. How do you imagine the reunion between Enza and her family? How will Schilpario be different for Enza when seen through Angela and Antonio's eyes?