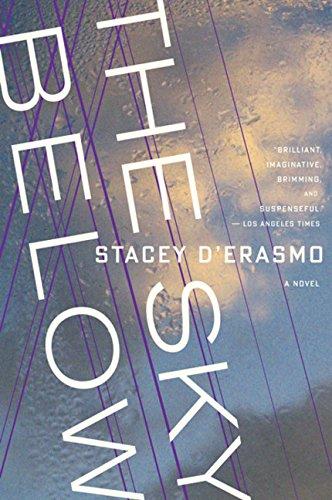 “D’Erasmo moves to the top of her craft with The Sky Below,” said Town and Country, and many others have joined the chorus of critical acclaim for her newest novel, in part inspired by Ovid, which illuminates the myths that underlie our everyday lives.

At thirty-seven, Gabriel Collins works halfheartedly as an obituary writer at a fading newspaper in lower Manhattan, which, since 9/11, feels like a city of the dead. This once dreamy and appealing boy has turned from a rebellious adolescent to an adult who trades in petty crimes.

“D’Erasmo moves to the top of her craft with The Sky Below,” said Town and Country, and many others have joined the chorus of critical acclaim for her newest novel, in part inspired by Ovid, which illuminates the myths that underlie our everyday lives.

At thirty-seven, Gabriel Collins works halfheartedly as an obituary writer at a fading newspaper in lower Manhattan, which, since 9/11, feels like a city of the dead. This once dreamy and appealing boy has turned from a rebellious adolescent to an adult who trades in petty crimes. His wealthy, older boyfriend is indulgent of him–to a point. But after a brush with his own mortality, Gabriel must flee to Mexico in order to put himself back together. By the novel’s end, we know all of Gabriel’s ratty little secrets, but by dint of D’Erasmo’s spectacular writing, we exult in the story of an imperfect man who–tested by a world that is often too much for him–rises to meet the challenge.

Stacey D’Erasmo is the author of the novels Tea, a New York Times Notable Book, and A Seahorse Year, a San Francisco Chronicle Best Book of the Year and a Lambda Literary Award winner. Her writing has appeared in the New York Times Magazine, the New York Times Book Review, and Ploughshares. A recipient of a Guggenheim Fellowship in Fiction, she is currently an assistant professor of writing at Columbia University. She lives in New York

“In her conceptually brilliant, imaginative, brimming and suspenseful novel, her evocations of place are ravishing; her characters are at once richly human and magical, and their confounding predicaments are both commonplace and cosmic.”

” …studded throughout are ringingly memorable lines, ones that make you see, hear, feel.” —Boston Globe

“A beautifully written compilation of the small, strange specificities that make us each uniquely human.” —Margot Kaminski, San Francisco Chronicle

Throughout the novel, Gabriel begins several chapters with a variation of “When did I first stumble into the wrong grove?” Where does this metaphor come from, and what meaning does it have for Gabriel?

When Mr. Collins abandons his family, Gabriel, Caroline, and their mother, Mary, each find different ways to cope. Discuss how each character deals with this event and how it shapes who they become.

In Brewster, Florida, the adolescent Gabriel starts sneaking into people’s homes. At first he simply enters and vanishes. Then he begins moving things around. Then he steals. Why do you think Gabriel does this? What does he get out of it? Why does he think he might have turned out differently if the family had never moved out of Bishop, Massachusetts?

On page 61 he says, “Think of the next decade or so as a series of boxes.” Does this metaphor apply to the way the author tells the story? Do you think it has resonance for life in general? What prompts Gabe to start making his art boxes? How does he use them besides as art?

Transformation is a theme that reasserts itself throughout the novel, beginning with Gabriel’s obsession with Ovid. He is both fascinated and frightened by the idea of the gods swooping down to transform ordinary mortals into animals. He also experiences the power of names as he shifts from Gabriel to G to Gabe in adolescence. Identify other moments of transformation in the story, and discuss their significance.

Discuss the use of birds and wind as symbols in this novel. Why do you think Gabe’s agent of transformation often manifests itself as wind or birds?

Compare Gabe’s art boxes to his stash of foil-wrapped freezer cash to his shoeboxes of cash and stolen goods under his bed in Brewster. What do you make of this tendency he has to hoard things? What does it tell you about Gabe’s desires and needs?

On page 150, Gabe dreams about his “four serious queens”: Fleur, Caroline, his mother, and Sarah. What roles do these women play in his life? Why isn’t Jenny one of the queens? Discuss Gabe’s complicated relationships with the men and women in his life. Do you think he ever experiences true intimacy? Why or why not?

Gabriel never really knew his father, who is described as living on the fringes of their family, “an extra planet that had somehow strayed into [their] solar system” (p. 11). And yet their lives run so parallel. His father made dozens of unfinished guitars; Gabriel makes wooden boxes. His father, perhaps unsure of his place in the world, flees to Mexico, as does Gabriel. At the ex-convento, Gabriel muses that his father the contractor might be proud to see his son, now grown, covered in concrete powder and digging latrine pits. Why do you think Gabe goes looking for his father in Mexico after all these years? Do you think he’s really looking for his father, or has his father become symbolic of something else?

Though he’s always hoping for transformation, Gabriel is in many ways a transitive figure by nature: he straddles lines and lives in gray areas, almost a shade himself, with one foot in the land of the living and the other in the land of the dead. Discuss how Gabriel’s life as portrayed in the novel blurs the lines of sexual definition, life and death, and right and wrong.

On pages 262 and 263, Gabriel undergoes an incredibly bizarre yet profound experience that, he feels, releases him from what has been a lifelong process of transformation. What do you make of this scene? What seems real? What seems unreal?

In the end, Gabe returns to Manhattan to begin archiving New York’s dead into a “city of light,” a digital landscape where their souls can remain forever. He finally finds fulfillment with this project, while also embracing his relationship with Janos and other important people in his life. Starting with his childhood, what choices do you think led Gabe to this purpose? How does the author use the dead and death in the novel?

In both the prologue and the final pages of the novel, Gabriel speaks directly to the reader, the recipient of his modern myth, his story. What effect does this have on your reading experience? What do you think the author is trying to tell you about the story with this technique?