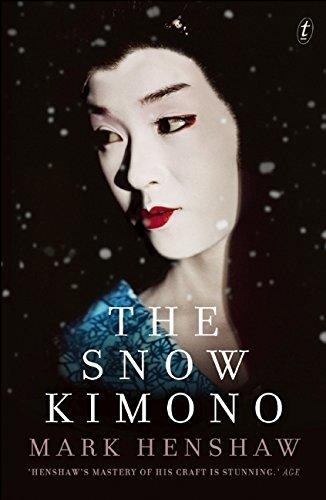 Paris, 1989. Recently retired police inspector Auguste Jovert receives a letter from a woman who claims to be his daughter. Two days later, a stranger knocks on his door. His name is Tadashi Omura, and he is a former law professor. He tells Jovert stories about his life, and about a man named Katsuo Ikeda, whom he met when they were both children and who later became a successful writer.

Set in France, Japan, and Algeria, The Snow Kimono is a jigsaw puzzle of a novel. The stories that Jovert and Omura tell each other fit together in unpredictable ways.

Paris, 1989. Recently retired police inspector Auguste Jovert receives a letter from a woman who claims to be his daughter. Two days later, a stranger knocks on his door. His name is Tadashi Omura, and he is a former law professor. He tells Jovert stories about his life, and about a man named Katsuo Ikeda, whom he met when they were both children and who later became a successful writer.

Set in France, Japan, and Algeria, The Snow Kimono is a jigsaw puzzle of a novel. The stories that Jovert and Omura tell each other fit together in unpredictable ways. Each new story changes the possibilities of what might happen next. Little by little we glimpse how these men have lied to themselves and to each other. These lies are about to catch up with them.

A quarter of a century after the best-selling, multi-award-winning Out of the Line of Fire, Mark Henshaw returns with a novel that is both a psychological thriller and an unforgettable meditation on love and loss, memory and its deceptions, and the things that bind us to others.

Mark Henshaw has lived in France, Germany, Yugoslavia and the United States. He currently lives in Canberra.

In 1989 Mark was awarded a Commonwealth Literary Fellowship, and in 1994 he won the ACT Literary Award. Under the pseudonym J. M. Calder, in collaboration with John Clanchy, he has written two crime novels, If God Sleeps (1996) and And Hope to Die (2007). His work has been widely translated. For many years he was a Curator of International Art at the National Gallery of Australia. He recently returned to writing fiction full-time.

“When I finished The Snow Kimono, I…turned straight back to page one and began again. That never happens to me.” —Saturday Paper

“Henshaw marshals densely wrought material with a masterly semblance of ease… With agile intelligence, with boldness in what he has imagined and tight control over how it is developed, Henshaw has announced triumphantly that he is no longer a ghost on the Australian literary scene, but one of its most substantial talents.” —Australian

“Henshaw creates a world of psychological complexity and emotional subtlety in a story that moves from Paris to Japan and back again…Henshaw’s prose shimmers as his narrative becomes ever more nuanced, complex, and misleading.” —Kirkus Reviews

Discuss morality in the novel. For example, talk about the moral dilemmas the characters face, whether they have made the right choices or what they should have done. Is Katsuo the most immoral of the characters? Is Jovert more moral? And does the novel itself pass moral judgment?

Discuss Katsuo’s character, aside from his morality. What kind of man has Mark Henshaw made him? And how can we know him? What of Jovert’s character?

What are the similarities and differences between Katsuo and Jovert? Are they ‘two parts of an uncompleted whole’ (362)? Which other characters in the book have similar bonds, or have parallels drawn between them? What do these parallels suggest?

Katsuo has written a novel called The Chameleon, but he is not the only person who assumes different colours. Many characters pretend to be someone other than who they are (Omura pretends to be Fumiko’s father; Natsumi pretends to be a governess; Jovert has two identities in Algiers; Sachiko’s parents are not really her parents; and, most obviously, Katsuo pretends to be Omura). What is the novel saying about identity?

Katsuo tells Tadashi: ‘if you want power over people, you have to get inside them, find out what they are afraid of’ (84–5). Is Katsuo right? How do characters get inside each other in the novel? Are they truly able to do so?

Omura asks for Jovert’s opinion on what he should have done when he heard the axe falling when he was visiting Sachiko’s grave with Fumiko. He tells Jovert: ‘if you want to see your life, you have to see it through the eyes of another’ (47–8). Why? Is he seeking judgement? What other parts of the story does he want Jovert’s perspective on? Why does he want Jovert’s perspective in particular? And if ‘Omura’ is Katsuo, who is asking

for Jovert’s perspective, and is he asking for Jovert’s thoughts on Omura or on Katsuo? Was their meeting ‘preordained’ so that the ‘unfolding’ could begin (369)?

‘You don’t exist. Except as a function of me’ (145), Katsuo says to Tadashi. Discuss whether or how this is true.

Why is the book named after the kimono that Sachiko wears when she meets Katsuo and when she dies during childbirth in the snow? Is the snow kimono the central symbol of the book? If so, does that mean Sachiko’s story is the central story?

Another important symbol is the jigsaw puzzle. What are puzzles an analogy for? Think about Omura’s comments that puzzles in the ‘ancient tradition’ are ‘calculated to deceive…to make the solution of the puzzle as difficult, as challenging, as possible. In our tradition, how a puzzle is made, and how it is solved, reveals some greater truth about the world’ (43). What greater truth does this novel reveal about the world? Is the book itself ‘calculated to deceive’? Omura’s father likes himitsu-e puzzles, which ‘have an infinite number of solutions, or solutions which are mutually contradictory’ (44). Is this true of the novel too? And what of the difference between the Eastern and Western jigsaw puzzles, and the different interpretations Omura and his father have of them (46)?

Discuss some of the other symbols in the novel (a few suggestions—birds; snow and ice; gaps, abysses and ravines; the Spirit of Liberty statue that Jovert can see from his apartment window).

‘There are times in your life when something happens after which you’re never the same’ (3). Are there key moments in our lives like this? What is the novel saying about transformation? Talk about the times characters cross over from one state into another.

How do the two epigraphs capture the main themes of the novel? Or do they indicate only some of the novel’s concerns? Or are they misdirecting the reader altogether?

Are we as readers supposed to try to sort out the novel’s fact from its fiction?

Many characters can’t remember what happened between particular moments: for example, Jovert when Omura first comes into his apartment (10). Why does Henshaw have the characters experience these gaps in their memory? Later, Jovert thinks that ‘to see his inability to recall what Omura had said the night before—after he had turned to walk back down the path—as a gap, a void, was the wrong way to see things. What he should do was not to search for what had dropped out of his memory, but to look more closely at what had come so insistently to inhabit it’ (29). Is this a clue to how to read the novel?

How does Jovert’s role in the Algerian war sit with the rest of the novel? And, related to this, what of the story of his wife and son?