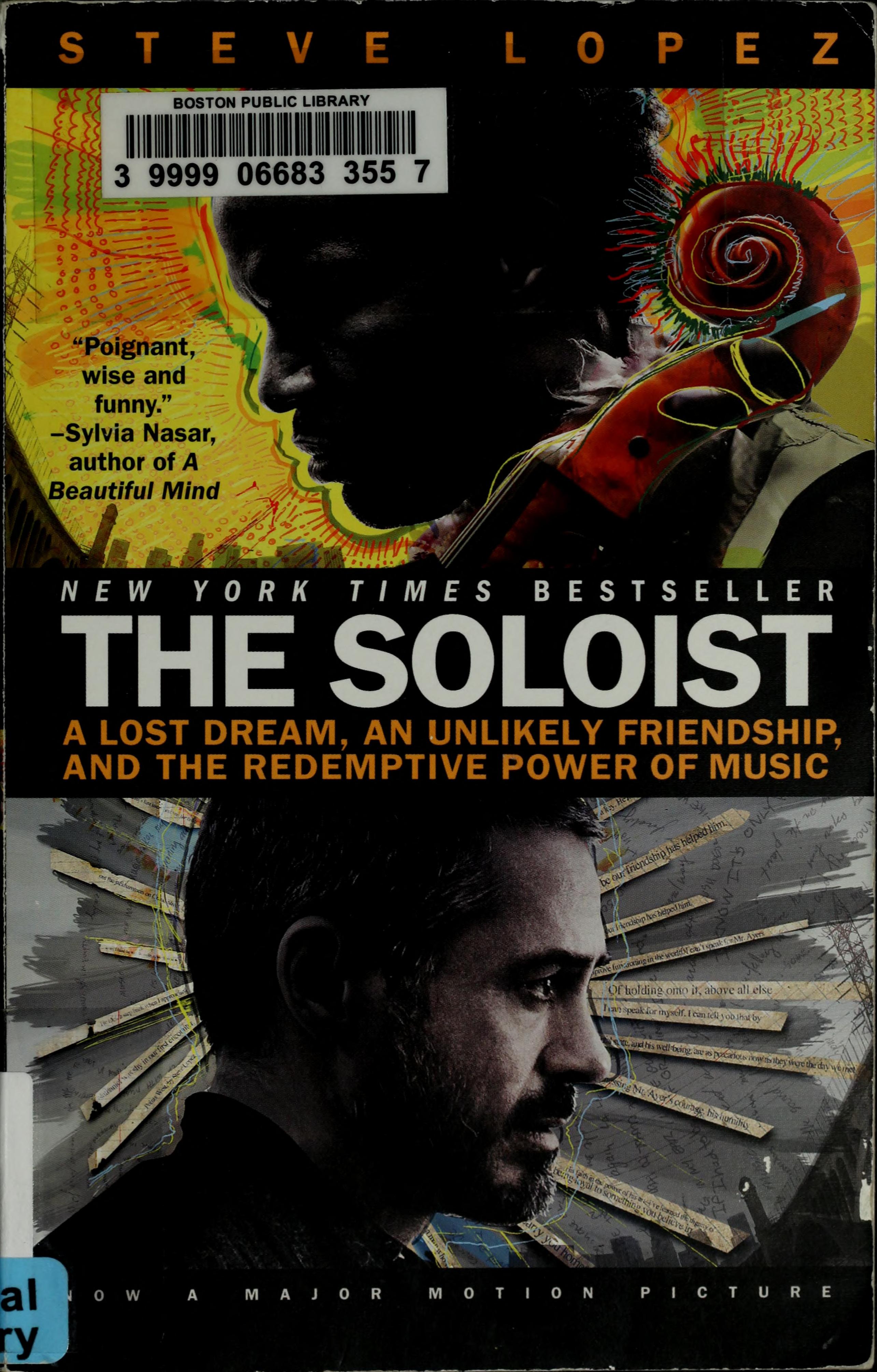 A Lost Dream, an Unlikely Friendship, and the Redemptive Power of Music

Now a major motion picture—”An intimate portrait of mental illness, of atrocious social neglect, and the struggle to resurrect a fallen prodigy.” –Mark Bowden, author of Black Hawk Down)

When Steve Lopez saw Nathaniel Ayers playing his heart out on a two-string violin on Los Angeles’ skid row, he found it impossible to walk away. More than thirty years earlier, Ayers had been a promising classical bass student at Juilliard—ambitious, charming, and also one of the few African-Americans—until he gradually lost his ability to function, overcome by schizophrenia.

Now a major motion picture—”An intimate portrait of mental illness, of atrocious social neglect, and the struggle to resurrect a fallen prodigy.” –Mark Bowden, author of Black Hawk Down)

When Steve Lopez saw Nathaniel Ayers playing his heart out on a two-string violin on Los Angeles’ skid row, he found it impossible to walk away. More than thirty years earlier, Ayers had been a promising classical bass student at Juilliard—ambitious, charming, and also one of the few African-Americans—until he gradually lost his ability to function, overcome by schizophrenia. When Lopez finds him, Ayers is homeless, paranoid, and deeply troubled, but glimmers of that brilliance are still there.

Over time, Steve Lopez and Nathaniel Ayers form a bond, and Lopez imagines that he might be able to change Ayers’s life. Lopez collects donated violins, a cello, even a stand-up bass and a piano; he takes Ayers to Walt Disney Concert Hall and helps him move indoors. For each triumph, there is a crashing disappointment, yet neither man gives up. In the process of trying to save Ayers, Lopez finds that his own life is changing, and his sense of what one man can accomplish in the lives of others begins to expand in new ways.

Poignant and ultimately hopeful, The Soloist is a beautifully told story of friendship and the redeeming power of music.

Steve Lopez is a columnist for the Los Angeles Times, where he first wrote a series of enormously popular columns about Nathaniel Ayers. Lopez, the father of three children, lives in Los Angeles with his wife, Alison, and daughter, Caroline.

“Lopez is a terrific reporter. The Soloist is poignant, wise, and funny.” —Sylvia Nasar, author of A Beautiful Mind

“An unforgettable tale of hope, heart and humanity” —Parade

When they first meet, Steve looks at Nathaniel as a compelling story for his newspaper, one that has the potential to bring attention to the inhabitants of Los Angeles’s Skid Row. What do you think compels him to continue to take on responsibility for Nathaniel’s wellbeing following the initial article?

Although Steve didn’t enter into his relationship with Nathaniel looking for either a friend or a musical teacher, he winds up with both. Discuss how their relationship progressed from writer-subject to the friendship the two men now enjoy. Is there a turning point in their relationship that you can identify? Have you experienced something similar in your own life?

Classical music is as much a ‘character’ throughout the book as any of the people. For Nathaniel, the music he plays at times can help to keep his illness at bay. Do you believe that these creative kinds of therapy can ever be a replacement for anti-psychotic drugs? How does Nathaniel’s love of music eventually begin to influence Steve?

From their first meeting, Steve and Nathaniel both have an impact on each others’ lives that is almost palpable and touches the lives of the people around them. Discuss the ways in which their relationship becomes not only a catalyst for change in their lives but also the lives of others.

Upon visiting Disney Hall for the first time, Nathaniel comments “It’s like a dream. I don’t know if it’s a dream or purgatory (p. 114)”. Steve ruminates upon this comment for a moment, finally accepting it as is. Discuss what you think Nathaniel means by this. Do you think there’s any deeper meaning to it, or do you agree with Steve’s assessment?

One of Steve’s goals in the book is to shed light on the homeless situation on Skid Row and the mental health problems that most of the people there suffer, going into some depth regarding different forms of therapy and medication. How do you think families should handle a mentally ill relative? Do you think it is okay to force treatment on a person? Are there any instances that could change your mind?

Readers begin to donate instruments and money almost immediately following Steve’s first article. What do you think compels people to help a stranger? Do you believe that people would have been as eager to help Nathaniel had Steve not written about him and his plight? Why or why not? What do you think this says about human nature in general?

Nathaniel attended Julliard during the 1960s, when its students were predominately white. How much do you think the pressures of being one of the only African-American students at Julliard contributed to Nathaniel’s breakdown?

After Steve’s articles are published, the mayor of Los Angeles visits Skid Row with him to see it firsthand. Discuss whether or not you think he’d have made this visit without Nathaniel’s story as a catalyst. Would a series of articles that simply focused on the homeless in Los Angeles as a group been as effective?

On page 139, Nathaniel states “I can’t survive if I can’t hear the orchestra the way I like to hear it.” Do you agree with Steve’s assessment that, in a variety of ways,Nathaniel is freer as a man than most ‘regular’ people? Do you think it’s possible for people to live unfettered by society without living outside of its confines?