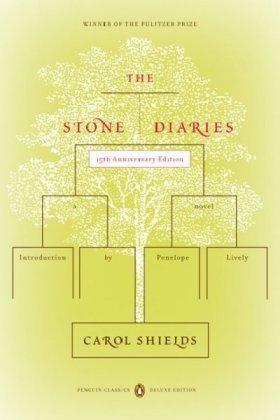 From her calamitous birth in Manitoba in 1905 to her journey with her father to Indiana, throughout her years as a wife, mother, and widow, Daisy Stone Goodwill struggled to understand her place in her own life. Now, in old age, Daisy attempts to tell her life story through a novel. She listens, she observes, and, through sheer force of imagination, she becomes a witness of her own life: her birth, her death, and the troubling misconnections she discovers in between.

“She enlarges on the available material, extends, shrinks, reshapes what’s offered; this mixed potion is her life.

From her calamitous birth in Manitoba in 1905 to her journey with her father to Indiana, throughout her years as a wife, mother, and widow, Daisy Stone Goodwill struggled to understand her place in her own life. Now, in old age, Daisy attempts to tell her life story through a novel. She listens, she observes, and, through sheer force of imagination, she becomes a witness of her own life: her birth, her death, and the troubling misconnections she discovers in between.

“She enlarges on the available material, extends, shrinks, reshapes what’s offered; this mixed potion is her life. She swirls it one way or the other, depending on—who knows what it depends on?the fulcrum of desire, or of necessity. She might drop in a ripe plum from a library book she’s reading or something out of a soap opera or a dream.”

The life in question belongs to Daisy Goodwill Flett, “a middle-class woman, a woman of moderate intelligence and medium-sized ego and average good luck.” In other words, a woman so commonplace that her story would seem barely worth remarking, were it not, perhaps, for her own determination to tell it. And in telling it, give it shape and meaning—even if she must supply these herself.

This is the problem that Carol Shields addresses in The Stone Diaries: how do small lives, the kind most women were once assumed to lead, assume significance and coherence? How closely do our versions of those lives correspond to objective facts? Can facts be said to exist at all in the context of something as changeable and arbitrary as a life? To what extent do “our” stories really belong to us, considering the tendency that other people—parents, spouses, children—have to intrude in them, interpret them, claim them?

The Stone Diaries approaches these problems with seductive prose, a serene wit and an artfulness that is all the more dazzling given the novel’s apparent insistence on the ordinary. Indeed, one of Shields’ conceits has been to disguise her fiction as a “real” biography, complete with period photographs and a family tree. But beneath the scrupulous—if spurious—documentation and bland rural and suburban settings lie incidents as fantastic as the inventions of Gabriel García Márquez: a hugely fat woman dies in childbirth without ever realizing that she was pregnant; a dour Orkneyman journeys back to the island he left decades before, severing ties, jettisoning possessions, and living on to the age of 115 (with the uncanny ability to recite Jane Eyre from memory); a young husband falls to his death ten days after his wedding, possibly as the result of an unexpected sneeze, and his wife, who did the sneezing, never mentions her marriage and its grotesque ending to another soul. Strangest of all, the heroine of this novel passes through her life without ever fully occupying it—an absence that this beautiful and haunting book attempts to redeem.

Shields is the author of several novels and short-story collections, including The Orange Fish, Swann, Various Miracles, Happenstance, and The Republic of Love. Her books have won a Canada Council Major Award, two National Magazine Awards, the Canadian Author’s Award, and a CBC short story award. The Stone Diaries was nominated for the National Book Critics Circle Award and the 1993 Booker Prize, and won Canada’s Governor General Award. It was also named one of the best books of the year by Publishers Weekly and a Notable Book by The New York Times Book Review.

” Bittersweet, beautifully written . . . deliciously unclassifiable, blatantly intelligent and subtly subversive . . . The Stone Diaries chips away at our most cherished, comforting beliefs about the immutability of facts and fate.” —San Francisco Chronicle

“ The Stone Diaries reminds us again why literature matters.” —The New York Times

The first chapter of this novel is the only one that is narrated entirely in the first person. Why might the author have chosen to shift narrative voices? At what points in the book does the narrative “I” return? Who do you think is telling Daisy’s story?

What irony is implicit in the fact that Mercy Goodwill is unaware of her own pregnancy? Compare this near-virgin birth to Daisy’s own catastrophically chaste honeymoon. How do this novel’s female characters experience sex, pregnancy and childbirth?

Although Daisy describes her mother as “extraordinarily obese” and taller than her husband, a photo reveals that Mercy Goodwill is actually shorter than Cuyler and no more than ordinarily husky. Is Daisy lying? Or does she merely have “a little trouble with getting things straight?” Where else are there discrepancies between Daisy’s version of her life and the book’s “documentation?”

From the passionate Cuyler Goodwill to Barker Flett, who is smitten with Daisy while she is still a child, the men in this novel are both erotically enthralled by women and fulfilled by their relationships with them. In contrast, their wives seem bewildered by, indifferent to, or at best serenely tolerant of their husbands’ ardor. Does The Stone Diaries subvert traditional sex roles? Where do Daisy and the novel’s other female characters derive their greatest pleasure and fulfillment? How badly do Shields’s women need men?

When Cuyler Goodwill loses his wife he builds her a tower. When his daughter loses her first husband, she never tells the story to another soul. What might account for her reticence? How deeply does Daisy seem to love either of her husbands? On the other hand, how trustworthy are these characters’ public displays of emotion?

“Life is an endless recruiting of witnesses.” This observation in the first chapter seems borne out by the constant stream of secondary characters who intrude into Daisy’s life story and at times commandeer it. What role does Daisy—or Carol Shields—assign “witnesses” like the Jewish peddler Abram Gozhd’ Skutari, the bicyclist who kills Clarentine Flett, or Cuyler Goodwill’s housekeeper? Why might these characters reappear in the narrative years after their initial entrances? How trustworthy are their interpretations of Daisy’s life and character?

Although Cuyler Goodwill builds a tower in his wife’s memory, he is unable to remember her name at the time of his own death. Magnus Flett is able to recite much of Jane Eyre from memory well into his hundreds. And, even as small children, Alice, Warren and Joan Flett “take turns comparing and repeating their separate and shared memories and shivering with pleasure every time a fresh fragment from the past is unearthed.” What role does memory play in The Stone Diaries? How much of Daisy’s diary is remembered, and how much imagined?

In the chapter entitled “Sorrow,” a number of characters offer explanations for Daisy’s depression. How accurate are any of these? Are we given any reason to trust one interpretation over others? How well do any of Daisy’s intimates really know her? How well does the reader know her by the book’s close?

How does Daisy influence her children or determine the choices they make in their own lives? Does she seem to do so at all? What kinds of lessons does she impart to them? Is Daisy Flett a “good” mother, a “good” wife or daughter? Does The Stone Diaries allow us to make such easy judgments about its protagonist?