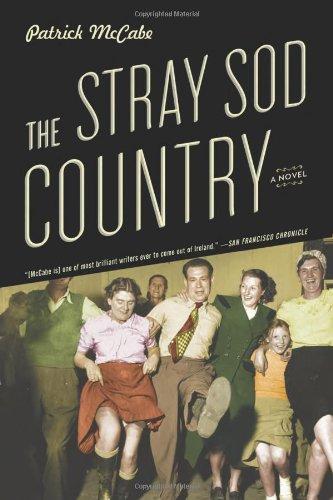 It is 1958, and as Laika, the Sputnik dog, is launched into space, Golly Murray, the Cullymore barber’s wife, finds herself oddly obsessing about the canine cosmonaut. Meanwhile, Fonsey “Teddy” O’Neill is returning, like the prodigal son, from overseas, with Brylcreem in his hair and a Cuban-heeled swagger to his step, having experienced his coming-of-age in Skegness, England. Father Augustus Hand is working on a bold new theatrical production for Easter, which he, for one, knows will put Cullymore on the map. And, as the Manchester United football team prepares to take off from Munich airport, James A. Reilly sits in his hovel by the lake outside town,

It is 1958, and as Laika, the Sputnik dog, is launched into space, Golly Murray, the Cullymore barber’s wife, finds herself oddly obsessing about the canine cosmonaut. Meanwhile, Fonsey “Teddy” O’Neill is returning, like the prodigal son, from overseas, with Brylcreem in his hair and a Cuban-heeled swagger to his step, having experienced his coming-of-age in Skegness, England. Father Augustus Hand is working on a bold new theatrical production for Easter, which he, for one, knows will put Cullymore on the map. And, as the Manchester United football team prepares to take off from Munich airport, James A. Reilly sits in his hovel by the lake outside town, with his pet fox and his father’s gun, feeling the weight of an insidious and inscrutable presence pressing down upon him.

As these imperiled characters wrestle with their identities, mysteriously powerful narrator plucks, gently, at the strings of their fates, and watches the twitching response. This novel is a devil’s-eye view of a lost era, a sojourn to the dark side of our past, one we may not have come back from. With echoes of Peyton Place and Fellini’s Amarcord, and with a sinister narrator at its heart, this is at once a story of a small town—with its secrets, fears, friendships, and betrayals—and a sweeping, theatrical extravagance from one of the finest writers of his generation.

Patrick McCabe was born in Clones, Country Monaghan, Ireland, in 1955. His novels include Carn; The Dead School; The Butcher Boy, which won the Irish Times/Aer Lingus Literature Prize, was shortlisted for the 1992 Booker Prize, and was made into a highly acclaimed film directed by Neil Jordan; Breakfast on Pluto, also shortlisted for the Booker Prize; Winterwood, winner of the Irish Novel of the Year 2007; and, most recently, The Holy City. He lives in Clones.

“[A] charming and often dark ensemble story … McCabe astutely paints a portrait of life in one Irish village, where people struggle both to adapt to modernity and to keep their traditional demons at bay. Historically authentic and with a timeless resonance, this tale provides an appreciable balance of humor, poignancy, and that signature Irish warmth.”—Publishers Weekly

Discuss the relationship between Catholics and Protestants in Cullymore. How are interfaith couples treated in this small town? When do tensions flare up between these two religious groups?

Consider the rivalry between Father Hand and Father Patrick Peyton, who is famous for his star-studded “Rosary Crusade” in America (31). Why does Father Hand feel such rage for Father Peyton? Does Father Peyton seem to share Father Hand’s hostility? Why or why not?

What was the impact of the “Reilly incident” at Rathwilliam College (9)? How does James Reilly explain his unusual behavior toward his student Jerome Brolly? How does the town treat Reilly after the scandal? What was Father Hand’s connection to the incident, and how does he feel about Reilly and Brolly now?

Discuss the character Golly Murray, whose mental state changes drastically over the course of the novel. What are Golly’s concerns at the beginning of the novel? How does her sanity erode as her relationships with her husband, her son, and Blossom Foster progress? Why does the narrator take a special liking to Golly and what effect does he have on her?

Many characters in The Stray Sod Country seem to be acting differently from usual over the course of the novel. Which characters do we get to know best by their out-of-character behavior? How do you picture them behaving to each other without the sinister influence of the narrator?

The novel’s narrator, an “inscrutable chronicler,” makes his first appearance in chapter 14 (73). Why do you think the narrator stays hidden for the first few chapters of the novel? What influence does the narrator have on the townspeople’s lives? Who is most affected by this “nobodaddy” or “Fetch,” and who is spared his meddling?

On the ferry ride back home after a year and a half in London, Fonsey O’Neill changes his name to “Teddy.” What does this name change mean to Teddy as he makes his triumphant return to his hometown? How does Teddy hope to start fresh in Cullymore and how are his hopes dashed when he arrives in town?

Discuss the rivalry between Golly Murray and Blossom Foster. Is Blossom purposely cruel, as Golly imagines, or is she just a small-town gossip? Does Blossom seem aware of her impact on Golly’s state of mind? Why or why not?

Laika, the Sputnik dog orbiting in space, has a strange hold upon Golly Murray. Why is Golly fascinated by this isolated dog? How does Golly, too, feel isolated in her hometown?

In 1958, Cullymore seems to be on the verge of giving up some of “that old hearsay and superstition” about diabolical influences on their town (154). Which characters seem to be under the spell of superstition and which try to embrace modern ideas and influences?

The Stray Sod Country is a folk story that can “explain why something you knew well could suddenly turn around and completely confound you” (224). How does this feeling of loneliness and unfamiliarity take hold in Cullymore? What, if anything, helps combat these foreboding feelings?

What attitudes do the townspeople of Cullymore have toward other countries? How do the main characters feel about swinging London, Roman holidays, American celebrity, and Russian space exploration?

In 1975, after some of the Cullymore gang has died, the town organizes a “Faithful Departed Exhibition” to honor their memories (273). What view of the town does the exhibition provide? How do the townspeople remember “those long-departed Tenebrae days” of 1958 (281)? Is Cullymore truly “the opposite of Stray Sod Country” (274)? Or do feelings of alienation and strangeness still persist in Cullymore in the 1970s and beyond?

Discuss the events of the 1958 Easter mass, when the Cullymore gang performs Tenebrae. What happens during that ill-fated mass? Did Tenebrae help Cullymore “attain the status of legend,” as Father Hand intended (41)? Why or why not? Was Tenebrae “a near-degrading laughable farce” or “nothing short of a miraculous event” (328) in hindsight?

Discuss the fate of James A. Reilly, who suffers an otherworldly vision of Jerome Brolly—as well as a very real beating by the butcher Barney Corr—during the Tenebrae performance. How does Reilly feel when he finally apologizes to Jerome Brolly? Why does Reilly commit suicide two months after the Easter incident? Why does Happy Carroll take over Reilly’s role in the town, occupying the hovel by the lake and becoming the next “little bit of harmless local colour” in Cullymore (330)?

The Stray Sod Country ends in 2009, with Golly Murray looking out her window. How is Cullymore a different place forty years after the Tenebrae performance? How does Golly find her way to “our own unassailable Stray Sod home” at the end of the novel (339)?