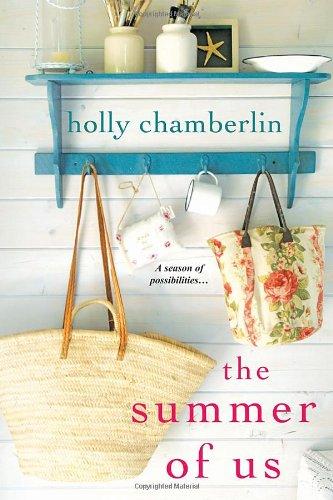 THE SUMMER OF US

The little beach house has a rickety porch and no closets, but the location is unbeatable—close to a gorgeous shoreline and the best nightlife on Martha’s Vineyard. All in all, more than enough to entice three total strangers into a house share for the summer…

At first, the only thing Gincy, Danielle, and Clare have in common is a desire to spend weekends away from the city. No-nonsense Gincy has worked hard to leave her small-town childhood behind. Danielle grew up with every advantage and is looking for a husband who’ll fit neatly into her pampered life,

The little beach house has a rickety porch and no closets, but the location is unbeatable—close to a gorgeous shoreline and the best nightlife on Martha’s Vineyard. All in all, more than enough to entice three total strangers into a house share for the summer…

At first, the only thing Gincy, Danielle, and Clare have in common is a desire to spend weekends away from the city. No-nonsense Gincy has worked hard to leave her small-town childhood behind. Danielle grew up with every advantage and is looking for a husband who’ll fit neatly into her pampered life, while Clare is enjoying a last burst of independence before marrying her ambitious fiancé. Yet lazy beach days and warm, conversation-filled nights forge an unexpected connection. And over the course of one eventful summer, Gincy, Danielle, and Clare will discover that friendship isn’t always measured in how well you know a person’s past—but in opening each other’s eyes to everything the future could hold…

“An honest, forceful novel about love, family, and sacrifice.”
—Booklist on One Week in December

“It does the trick as a beach book and provides a touristy taste of Maine’s seasonal attractions.”—Publishers Weekly on
The Family Beach House

“The Summer Of Us is a great choice for your summertime beach reads. A clever mix of sassy attitude and romance, I found myself eagerly turning pages to find out what happened next.”—Roundtablereviews.com

In the beginning of the book, Gincy presents herself as “the go-to girl.” Clare says that she’s “pleasant and easy to please.” Danielle claims to have good self-esteem. In what way is each character right or wrong in her self-assessment? By the end of the book, how might each character’s self description have changed?

Gincy despises her brother Tommy for being a drunken,

unmotivated “dirtbag.” Danielle loves and to some extent idolizes her older brother, David, a successful doctor. Clare’s brothers, James and Philip, have little if anything to do with her, though she wishes they were close. How might the brother-sister relationship have influenced each character’s chosen lifestyle or romantic decisions?

Gincy dutifully loves her father, though until certain

events in this story, she hasn’t truly appreciated his capacity for caring. Clare respects her father though he only values her through the achievements of her fiancé. Danielle genuinely loves her father, and he adores her as his “little girl.” How might the father-daughter relationship have influenced each character’s chosen lifestyle or romantic decisions?

Gincy has little love and no respect for her mother. Clare loves her mother, in spite of the fact that Mrs. Wellman’s dashed hopes for independence might have negatively influenced Clare’s ability to achieve the same. Danielle loves her mother but is wary of being smothered by her concern. How might the mother-daughter relationship have influenced each character’s chosen lifestyle or romantic decisions?

All three of the young women claim to have trouble forming friendships. Gincy has an unhealthy “mascot” sort of relationship with Sally, her office mate. Clare longs for the easy intimacy of childhood friendships. Danielle feels alienated from the girls with whom she grew up. Gincy, Clare, and Danielle’s coming together is partly a matter of timing; each character is ready, whether she knows it or not, to reach out to another person. What other factors might have contributed to the formation of this seemingly unlikely bond?

Gincy feels great remorse for her behavior after Sally

drunkenly declares her love. She feels that she has not

taken Sally seriously as a person, that she has “underestimated (Sally’s) capacity for joy and pain.” Do you think Gincy is right to feel remorse, or do you think she is being too hard on herself? How do her feelings about her behavior toward Sally relate to her grief over the suicide death of her colleague, and to the anxieties about her potential life as Rick’s partner?

Discuss the notion of privacy in a committed relationship. Consider Clare and her concerns about keeping a secret journal.

Explore how each character views marriage. In what ways are their views naïve or mature? For example, Gincy, perhaps with her parents’ unspectacular marriage in mind, has strenuously avoided the notion of commitment, and yet, when Rick asks her to move in with him, the issue that holds her back is her own perceived unworthiness. Clare, on the brink of a wedding she doesn’t quite want, sees marriage as an inevitable duty, almost a trap. She also sees it as a state of “belonging” with other women. There isn’t

much joy in Danielle’s view of marriage. She sees it as a necessary goal, a sign of maturity, “an end to something.”

Discuss the notion of a “leap of faith”—what is required when we’ve told ourselves we want one thing and quite another thing suddenly presents itself as a viable option. How does each character take—or not take—that leap?

At one point Rick says, “Life is short, Gincy. When something good happens, you embrace it.” But it’s not always easy to determine what is good for us at any given moment. Sometimes we aren’t prepared to make a big decision about our happiness. Discuss this in relation to Gincy, Clare, and Danielle.

Discuss the notion of honesty and fidelity, lying versus not telling the entire truth, in the case of each character. Consider Claire’s one-night stand with Finn in Boston; Gincy’s aborted one-night stand with Jason in Oak Bluffs; and Danielle’s continuing to date other men even while dating Chris. How is each situation different? Is any situation understandable, if not exactly excusable?

Clare tells us that she is no longer in love with Win, but that she does still love him “in the way you love someone you know so well it’s almost like loving yourself. Or, at least, being used to yourself. Win was just there like I was just there.” Discuss the validity of love as habit, or its lack thereof.

Win’s brother Trey says, “Family owes something to family. Even if it’s just pretending to get along.” Do you agree? Discuss in relation to Gincy, Clare, and Danielle.

Clare worries that by marrying Win, who holds opinions she finds offensive, she might be “by proxy a narrowminded, spiritless person.” Discuss the notion of collusion in a relationship. Is it possible to be with a person whose values and morals differ seriously from your own and not be somehow affected by them?

At one point Clare says, “You can get over anger . . . Hurt, too, can be mended . . . But sadness is different. It doesn’t seem to ever go away; it rests deep inside. Sadness is profound disappointment.” Discuss this.

Clare wonders if longevity in a marriage is a worthwhile accomplishment if the years together are “bland, possibly soulless.” Is Clare’s question naïve or mature? She also assumes that in a long-term exclusive relationship it is impossible to experience “flashes of supreme passion and knowledge.” Do you agree with her?

Rick believes that “Life can’t be about expectation. . . . Nothing’s ever as you expect it to be. Life has to be about risk. If you want to be happy, there’s no other way.” Discuss this in relation to Gincy, Clare, and Danielle.