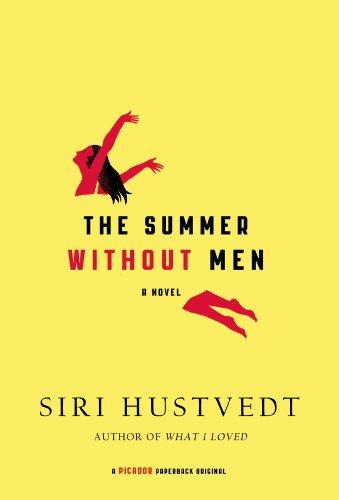 THE SUMMER WITHOUT MEN

Mia Fredrickson, the wry, vituperative, tragic comic, poet narrator of The Summer Without Men, has been forced to reexamine her own life. One day, out of the blue, after thirty years of marriage, Mia’s husband, a renowned neuroscientist, asks her for a “pause.” This abrupt request sends her reeling and lands her in a psychiatric ward. The June following Mia’s release from the hospital, she returns to the prairie town of her childhood, where her mother lives in an old people’s home. Alone in a rented house, she rages and fumes and bemoans her sorry fate. Slowly,

Mia Fredrickson, the wry, vituperative, tragic comic, poet narrator of The Summer Without Men, has been forced to reexamine her own life. One day, out of the blue, after thirty years of marriage, Mia’s husband, a renowned neuroscientist, asks her for a “pause.” This abrupt request sends her reeling and lands her in a psychiatric ward. The June following Mia’s release from the hospital, she returns to the prairie town of her childhood, where her mother lives in an old people’s home. Alone in a rented house, she rages and fumes and bemoans her sorry fate. Slowly, however, she is drawn into the lives of those around her—her mother and her close friends,”the Five Swans,” and her young neighbor with two small children and a loud angry husband—and the adolescent girls in her poetry workshop whose scheming and petty cruelty carry a threat all their own.

From the internationally bestselling author of What I Loved comes a provocative, witty, and revelatory novel about women and girls, love and marriage, and the age-old question of sameness and difference between the sexes.

Siri Hustvedt was born in 1955 in Northfield, Minnesota. She moved to New York City in 1978 and earned her Ph.D. in English literature at Columbia University in 1986. She is the author of five novels, including The Sorrows of an American, What I Loved, The Enchantment of Lily Dahl, and The Blindfold, as well as two collections of essays, A Plea for Eros and Mysteries of the Rectangle, and most recently The Shaking Woman or A History of My Nerves. She lives in Brooklyn with her husband, Paul Auster.

“Exuberant… A lighter, more lilting meditation on men and women, released in perfect time for summer reading… Hustvedt is a fearless writer… The reward for readers comes in the sheer intelligence of her prose… There is terrific writing here, mulling the gifts and limits of art, sex, marriage, but the touch is emphatically light… She’s managed not to shrink the truth of women’s lives, without relinquishing love for men.”—San Francisco Chronicle

“Siri Hustvedt’s engaging first novel…is a fragmented meditation on identity, abandonment, and loss. Multiple forms of prose pepper the narrative: poems, letters, e-mails, journal entries, and quotes from a raft of well-known scholars, scientists, and writers … Hustvedt manages to move seamlessly between Blake and Rilke to Kierkegaard and Hegel while maintaining a forward motion to this fluid narrative… Satsifying.”—Boston Globe

“An investigation into romantic comedy, both the classic Hollywood version—’love as verbal war’—and Jane Austen’s Persuasion… Among the novel’s pleasures are its analysis of gender…and the character of Mia herself, who comes across as honest, witty and empathetic.”—The New York Times Book Review

1. The novel opens with a quote from a movie, The Awful Truth, starring Cary Grant and Irene Dunn, in which the couple banter about things being the same and different in their marriage. This theme is repeated throughout the novel. Mia also quotes Plato, Plutarch, Montaigne, and others on the philosophical problem of sameness and difference. Discuss the significance of this idea to the novel as a whole.

2. Mia has a psychotic episode after Boris leaves her and is hospitalized. Later, Dr. S. tells Mia that “blowing up is not the same as breaking down…even breaking down can have a purpose, its meanings.” What purpose or meaning does Mia’s breakdown have?

3. What was your initial response to Boris’s wish for a “pause” in his marriage to Mia? How did your thoughts and feelings about Boris change over the course of the novel?

4. Maternal feeling is important in the book. Mia says that her mother is “a place…as well as a person” for her. Lola takes care of her two small children next door without much help from her husband. Mia is close to her daughter, Daisy, but remembers with bitterness that she was the one who “cleaned, did homework for hours, and slogged through the shopping.” Even the perpetually optimistic Peg confesses that there were times when she felt “blue” while staying at home with her five children. Ellen, Alice’s mother, suffers when her daughter is bullied. Discuss the roles of mothers in the novel.

5. The old women, “the five Swans,” and the girls in Mia’s class “The Gang of Four” are central to Mia’s summer without men. The Swans are near the end of their lives, and the girls are just at the beginning. How do the old and young understand time differently?

6. The men in the novel are all either dead or off stage, but they play important parts in the story nevertheless. Mia’s father, Harold, Boris, Stefan, Pete are all wield power even when they are not present. How do the novel’s absent men exert power over the women? When Dr. S. says to Mia, “You think if your anger had power, paternal power, you could shape things in your life more to your liking,” what does she mean?”

7. What purpose do the “secret amusements” serve for Abigail? Why does she have to hide her art? How are the “amusements” linked to the theme of feminine rage in the novel?

8. Laura’s brother, Harry, dies from polio at the age of twelve. Boris’s brother Stefan commits suicide at the age of forty-seven. Discuss how these very different losses affect the surviving sibling.

9. Mia was the victim of bullying when she was a girl. The girls in her class bully one member of their group—Alice. Mia talks about formal ostracism in ancient Greece, ostracism in the animal kingdom, and the Amish punishment, Meidung. When and why do groups turn on one of their own? Is there something about both Mia and Alice that makes them targets?

10. Why does Mia ask each girl in her class to take on the perspective of one of the other girls and write the story “The Coven”? How does the adoption different personas shift the dynamics of the group as the whole? Could Mia’s strategy be considered a cure through the imagination?

11. Mia says, “I will write myself elsewhere…reinvent the story in a new light,” and then she imagines herself as different literary characters. She also states, “The whole story is in my head, isn’t it? I am not so philosophically naïve as to believe that one can establish some empirical reality of THE STORY.” What does Mia mean by this? How does rewriting the story of her marriage help her endure emotional pain?

12. Near the end of the book in an email, Boris asks Mia to “dispense with the bitter irony.” She answers by saying, “How on earth do you think I would have made it through without it? I would have stayed mad.” Discuss how irony and humor help Mia remain sane.

13. Who is Mr. Nobody? What role does he play in the novel? How is he related to the presence Mia feels behind the door? Is he also somehow connected to Flora’s imaginary friend, Moki? Why do you think he starts out as a cruel character and ends up as a friendly one? Is he real or imaginary?

14. Near the end of the novel, Mr. Nobody writes a eulogy for Abigail, in which he links himself and Mia to the dead woman. “Your friend was one of us, the never anointed, the unchosen, misshapen by life, by sex, cursed by fate but still industrious under the covers where only the happy few venture, sewing apace for years, sewing her heartbreak and her spite and her spleen…” What do Mia, Abigail and Mr. Nobody have in common?

15. Mia discusses sexual stereotyping in the philosophy and science of different historical periods. She cites the views of a contemporary scientist who maintains that women are good at empathy and men are good at math and “dominance.” How has the idea of sexual difference and women as “other” evolved across disciplines and centuries? How has it affected contemporary neuroscience? What does Mia mean when she says, “Every era has had its science of difference and sameness, its biology, its ideology, and its ideological biology…”?

16. Sex, orgasms, and female and male genitalia are discussed repeatedly and at some length in the book. Why?

17. The old women read Jane Austen’s Persuasion for their book club. How does the story of Persuasion relate to The Summer Without Men? The women discuss Austen’s character Anne and mull over her comment: “Men have had every advantage in telling their own story. Education has been theirs…the pen has been in their hands. I will not allow books to prove anything.” How does this statement relate to Mia’s narration of her story? To what degree is Austen’s point still relevant?

18. There are four drawings in the novel. How do they depict what happens to Mia in the story?