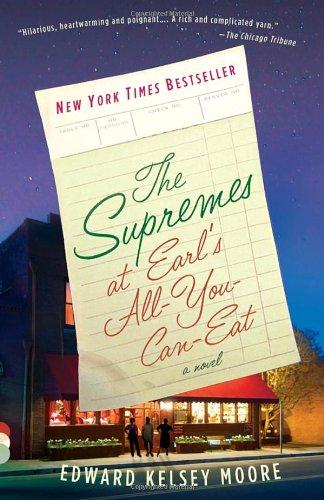 THE SUPREMES AT EARL’S ALL-YOU-CAN-EAT

Moving back and forth between past and present, the novel orbits around Earl’s All-You-Can-Eat diner, the first black-owned business in Plainview, Indiana. Clarice, Odette, and Barbara Jean (dubbed the Supremes by their friends) gather at the diner every Sunday to gossip, to hear the latest news of each other’s lives, and to comment on the town’s more eccentric characters, such as the consistently errant fortune-teller Minnie, Clarice’s ridiculously self-important cousin Veronica, and Veronica’s donut-addicted daughter Sharon.

Moving back and forth between past and present, the novel orbits around Earl’s All-You-Can-Eat diner, the first black-owned business in Plainview, Indiana. Clarice, Odette, and Barbara Jean (dubbed the Supremes by their friends) gather at the diner every Sunday to gossip, to hear the latest news of each other’s lives, and to comment on the town’s more eccentric characters, such as the consistently errant fortune-teller Minnie, Clarice’s ridiculously self-important cousin Veronica, and Veronica’s donut-addicted daughter Sharon. Earl watches over the Supremes from high school onward, and his diner represents community for these women, a meeting place that holds their lives together and offers solace, good humor, and support when it is most needed.

As the narrative weaves from past to present and more of the friends’ histories are revealed, the lives of Odette, Clarice, and Barbara Jean take on greater complexity. Their stories are filled with hard choices and dramatic incident. Clarice gave up a promising career as a concert pianist to marry former football star and charming womanizer Richmond, whose infidelities grow more brazen every day. Barbara Jean struggles with alcohol after the death of her husband, Lester. That death has reopened the wound she suffered when her son, Adam, was killed—run down by the racist brother of a white man she had loved long ago, and still loves. And what Odette thinks are lingering symptoms of menopause turn out to be not hot flashes but a more life-threatening disease. Fearless in her life, she now must face the very real prospect of crossing over to the realm of ghosts that her mother inhabits.

Life continues to test the Supremes’ spirit and resolve, yet these three extraordinary women rise to the challenge, and in the midst of their various trials and travails they never lose their sense of humor, their deep affection for one another, or their abiding capacity for joy.

Edward Kelsey Moore lives in Chicago, where he has enjoyed a long career as a cellist. His short fiction has appeared in several literary magazines, including Indiana Review, African American Review, and Inkwell. His short story “Grandma and the Elusive Fifth Crucifix” was selected as an audience favorite on National Public Radio’s Stories on Stage series.

“A book that deserves to be read in its enchanting entirety before the inevitable movie deal comes to pass.”—Stevie Godson, The New York Journal of Books

“Moore is a demonstrative storyteller and credits youthful eavesdropping for inspiring this multifaceted novel. Comparisons to The Help and Fried Green Tomatoes at the Whistle Stop Cafe are inevitable, but Moore’s take on this rowdy troupe of outspoken, lovable women has its own distinctive pluck.”—Publishers Weekly

“A gripping novel that weaves together the lives of three remarkable women, and does so with flair, wit, and tremendous heart.”—Carolina De Robertis, author of Perla and The Invisible Mountain

“The Supremes at Earl’s All-You-Can-Eat is rooted in the fond memories I have of a childhood spent eavesdropping on the women of my family as they talked at family gatherings. Even when I was too young to fully understand the often very adult subject matter of their conversations, I was struck by how quickly the topics veered from heartbreakingly tragic to wildly hilarious. . . . My intention in writing The Supremes at Earl’s All-You-Can-Eat was to celebrate the joy of true friendship and to invite readers to remember the smart, funny and strong women in their lives.” —Edward Kelsey Moore

Do you think the author has accomplished what he set out to do? Does he, a man, convey the feelings of women accurately and convincingly? In what ways is he especially knowing about women’s feelings?

Odette was born in a sycamore tree. Barbara Jean was born on the wrong side of the tracks. Clarice was the first black baby to be born in an all-white hospital. How do the circumstances of each woman’s birth shape her choices as adult? Their interactions with one another? Their relationships with their husbands?

When things get tough for the Supremes, they often see the funny side of the worst moments. Moore has a lot of fun with cousin Veronica and her donut-eating daughter. In what other instances do the Supremes use humor to help them survive?

Odette, Clarice, and Barbara Jean are best friends, but they’re quite different. What is a defining moment in each of their lives?

Commenting on “the tender considerations that came with being a member of the Supremes,” Odette says: “We overlooked each other’s flaws and treated each other well, even when we didn’t deserve it” (p. 37). What other qualities make the friendship among the three women so extraordinary? In what ways do they help one another?

The chapters alternate between Odette’s voice and an omniscient third-person narrator. What is the effect of this in storytelling? Why does Moore choose Odette as a narrator rather than Clarice or Barbara Jean?

Ghosts appear throughout the novel. What does Odette’s mother’s voice add to the story? What kind of personality comes through? In what ways does she represent a voice of wisdom, and can this be helpful or aggravating to Odette?

One of Dora Jackson’s beliefs is that “what we call miracles is just what’s supposed to happen. We either go with it or stand in its way” (p.296). What seemingly miraculous events occur in the novel, and why do some characters choose to “go with it” and others “stand in [their] way”?

Earl’s All-You-Can-Eat is the first black-owned restaurant in Plainview, Indiana. What role does place play in the novel, and how does the diner shape the lives of the main characters?

The Supremes grew up in tumultuous times. How was each one of them affected by the major social changes for African Americans, as well as for women, that occurred over the course of their lives?

How are the men who love the Supremes—James, Richmond, Lester, and Chick—each a reflection of the woman he loves? And what does each husband give to the woman in his life that she treasures, despite his failings?

Why does Clarice decide not to move back in with Richmond, even after he feels they’ve patched things up? What other changes do you see in Clarice after her separation from her husband, specifically in her relationship with music and religion? Do you think she will follow her dream as a musician?

Do you think that after a life of hard knocks, Barbara Jean will finally find happiness with Chick? Or is she destined for more tough times ahead?

Whether alive or dead (or a ghost), the mothers of the Supremes play a major role in their daughters’ lives. As the Supremes grow older, how do their mothers continue to exert an influence on their adult lives? Who is hurt most by it? Who is helped by it? Who is most like her mother as she gets older?

Odette, Clarice, and Barbara Jean each attend three very different churches. In what ways did growing up in these particular churches help to shape them into women they ultimately became?