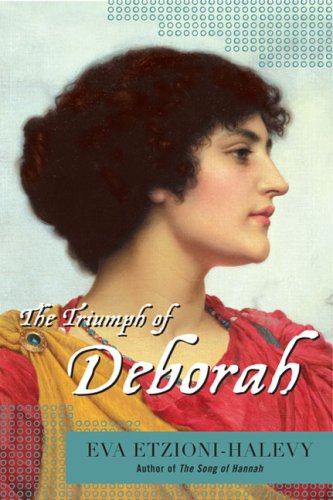 THE TRIUMPH OF DEBORAH

Tensions between the Israelites and the Canaanites have been mounting for years, but finally Deborah—the wise and revered judge of the Israelites—decides it is time to strike out against the enemy before the enemy strikes in full force against them. She calls on Barak, an equally revered warrior, to lead the call to war. Under his leadership, the Israelites destroy the Canaanite army, and Barak takes as his prisoners the daughters of the late Canaanite king.

Deborah’s decision to rely on Barak, however, costs her dearly. Her husband Lapidoth divorces her, knowing Barak’s reputation as a womanizer and suspecting the warrior of ulterior motives in his dealings with her.

Tensions between the Israelites and the Canaanites have been mounting for years, but finally Deborah—the wise and revered judge of the Israelites—decides it is time to strike out against the enemy before the enemy strikes in full force against them. She calls on Barak, an equally revered warrior, to lead the call to war. Under his leadership, the Israelites destroy the Canaanite army, and Barak takes as his prisoners the daughters of the late Canaanite king.

Deborah’s decision to rely on Barak, however, costs her dearly. Her husband Lapidoth divorces her, knowing Barak’s reputation as a womanizer and suspecting the warrior of ulterior motives in his dealings with her. Deborah, cast off and lonely, begins to develop an attraction for Barak—all the more complex because Barak has begun to develop feelings for his royal prisoners. While Deborah, Barak, and the Canaanite princesses Asherah and Nogah struggle with their loyalties to their pasts and their present desires, the nation of Israel struggles to maintain its tenuous peace in the wake of a victory over its neighbor and enemy.

A romantic, masterfully written piece of fiction, The Triumph of Deborah celebrates the wisdom and the superior guidance of one of the Bible’s most powerful and wise women, while also exploring the complex nature of loyalty: to one’s nation, to one’s family, and to one’s own sense of self.

Eva Etzioni-Halevy is professor emeritus of political sociology at Bar-Ilan University in Israel. She has published fourteen academic books and numerous articles, as well as two previous biblical novels. Born in Vienna, she spent World War II as a child in Italy, then moved to Palestine in 1945. She has also lived in the United States and spent time in Australia before taking up her position at Bar-Ilan. Eva lives in Tel Aviv with her husband; she has three grown children.

“This novel will be devoured by lovers of historical fiction and romance alike.”
—Library Journal

This book begins with two women looking out from “high places”—Deborah, from the mountain where the battle between the Israelites and the Canaanites had begun, and Asherah, the beautiful young daughter of Deborah’s enemy, the Canaanite king, from the roof of her father’s castle. The book also follows a third young woman, Nogah, the product of King Jabin’s affair with an Israelite slave woman. Whose story did you personally find most compelling? With which woman did you sympathize the most, and with whom did you sympathize the least?

At the start of the novel we learn about Deborah’s problems with her own husband of sixteen years, Lapidoth, and his jealousy of her relationship with Barak (which, up to that point, is a professional one). Was Lapidoth’s divorcement of Deborah as surprising to the reader as it was to Deborah?

When Deborah not only agrees to consider Barak’s terms, but willingly fulfills those terms upon his return from battling the Canaanites, how does her character change? Is she wiser or more foolish for her affair with Barak? Consider how this particular experience affected her ability to judge people fair and objectively.

Discuss Sisra’s death. Did Jael deserve to be ostracized for her actions, or were they actually heroic? Consider the difference between Deborah’s approval of Jael’s actions, and Barak’s reaction. How very different would the story have been if Sisra had died in a more expected manner?

Nogah goes from being a slave in the royal Canaanite palace to becoming one of its noble members almost overnight. This transition allows her to appreciate both aspects of her heritage—that of her Canaanite father and her Israelite mother. Discuss how Nogah’s knowledge and respect for both people make her a key player in the conflict between the two nations.

While the book follows primarily the thoughts and actions of its female characters, it also allows brief glimpses into the psyche of Barak, the courageous and cunning warrior who stops the Canaanite threat to Israel. How do we see Barak change over the course of the novel? How would you describe him at the onset of the conflict with the Canaanites, and what qualities does he take on (or shrug off) by the novel’s end? Is he a likeable character? Is he as compelling to the reader as he is to Deborah and Nogah?

While Asherah has had a far more privileged background than any other character in the book, she proves to be intelligent and resourceful as she plots to kill her new husband as revenge for the death of her first husband, and as she tries to diminish Nogah’s place in Barak’s household, and in his heart. Discuss how her own allegiance to her Canaanite background is both her saving grace and her undoing. Compare her devotion to her homeland to Nogah’s devotion to Israel and its people.

Nogah’s trip to see Deborah, and then to leave the scroll she has created with Gilad in the house of the Lord in Shiloh, marks a transformation in the young woman’s life. Discuss the extent of her accomplishment: obtaining Deborah’s version of the tale, plus the Song of Deborah, and gaining Deborah’s approval; then traveling to Shiloh and convincing the elders to house the scroll there. What does this do for Nogah’s sense of self, and for how others view her? How does she change as a result of the trip?

Describe the trajectory of the relationship between Nogah and Barak, and how both characters became better people for their interaction with one another. What was Barak forced to realize and accept? What did Nogah teach him? What did Nogah learn about the desires of the human heart—similar to what Deborah learned through her separation from Lapidoth?

When Lapidoth fathers another child with a servant, what parallel emerges between the Israelites and the Canaanites? Consider the way Deborah dealt with the news of the servant girl’s pregnancy, and how it affected her relationship with Lapidoth. What good came out of this situation?

Consider the final meeting of the Canaanites and the Israelites under Mishma’s roof. What does this scene tell us about what has been gained and what has been lost by both nations?

How realistic is Etzioni-Halevy’s portrayal of ancient Israel? Does this story feel true to its biblical roots? What makes these characters from an ancient time relevant to twenty-first-century readers? What common struggles do we share?