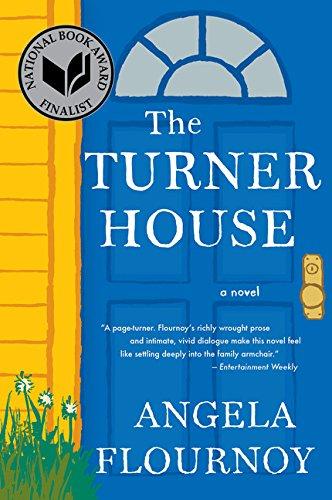 Short-listed for the PEN/Robert W. Bingham Prize for Debut Fiction

One of the National Book Foundation’s “5 Under 35”

Short-listed for the 2015 Center for Fiction First Novel Prize

Short-listed for the Ernest Gaines Award

Short-listed for The Morning News 2016 Tournament of Books

Long-listed for the 2016 Chautauqua Prize

Short-listed for the PEN/Robert W. Bingham Prize for Debut Fiction

One of the National Book Foundation’s “5 Under 35”

Short-listed for the 2015 Center for Fiction First Novel Prize

Short-listed for the Ernest Gaines Award

Short-listed for The Morning News 2016 Tournament of Books

Long-listed for the 2016 Chautauqua Prize

An Amazon Top 100 Editors' Pick of the Year

Finalist for the 2016 Indies Choice Awards

One of O, The Oprah Magazine's “10 Favorite Books of the Year”

One of Literati Bookstore's “Best Books of 2015”

For over fifty years the Turners have lived on Yarrow Street. Their house has seen thirteen children get grown and gone—and some return; it has seen the arrival of grandchildren, the fall of Detroit’s East Side, and the loss of a father. But when their powerful mother falls ill, the Turners are called home to decide their house’s fate and to reckon with how their past haunts—and shapes—their future. The Turner House is a striking examination of the price we pay for our dreams, and the ways in which our families bring us home.

Angela Flournoy is a graduate of the Iowa Writers' Workshop and the University of Southern California. Her fiction has appeared in the Paris Review, and she has written for the New Republic, the Los Angeles Review of Books, and other publications. She has taught writing at the University of Iowa and Trinity Washington University. She was raised by a mother from Los Angeles and a father from Detroit.

“An engrossing and remarkably mature first novel…Flournoy’s prose is artful without being showy. She takes the time to flesh out the world…In her accretion of resonant details, Flournoy recounts the history of Detroit with more sensitivity than any textbook could…Flournoy gets at the universal through the patient observation of one family’s particulars. In this assured and memorable novel, she provides the feeling of knowing a family from the inside out, as we would wish to know our own.”—New York Times Book Review, Editors' Choice

“The Turner House speeds along like a page-turner. Flournoy’s richly wrought prose and intimate, vivid dialogue make this novel feel like settling deeply into the family armchair.”—Entertainment Weekly

“Flournoy has written an epic that feels deeply personal…Flournoy’s finely tuned empathy infuses her characters with a radiant humanity.”—O, The Oprah Magazine

“Angela Flournoy's knockout debut is one of those books that should, by rights, be described as the Great American Novel, as it hits all the points of American life: family, real estate, money, ghosts and loss. Set mostly in Detroit during the financial crisis of 2008, the book tells the story of the 13 adult children of Francis and Viola Turner, who must decide what to do with their family house. The characters are fascinating and funny, and anyone who has played a role in the ecosystem of his family life will recognize the joys and challenges that plague the Turners. But perhaps the strongest character is Detroit itself, as it morphs from bustling modern metropolis to a potent symbol of post-industrial decline.”—NPR, “Our Guide to 2015's Great Reads”

Throughout the book, characters struggle with the concept of belonging—

to blood relations, in-laws, and even the city of Detroit. What does it mean to

“belong” in a group? How do characters come to terms with their own feelings

of belonging by the end of the novel?

The city of Detroit plays a large role in the way characters see themselves,

particularly for Francis Turner in the 1940s. How does the city itself contribute

to the story of the Turner family? Can you imagine a similar story taking place

elsewhere, or is the story inextricably tied to Detroit?

Cha-Cha sees himself as the patriarch of the family, but he also has trouble

getting his siblings to listen to him. In what ways does Cha-Cha’s view of himself

as the leader prevent his siblings from trusting or respecting him?

In their final meeting (p. 241), Alice tells Cha-Cha that she thinks his haint has

made him feel extraordinary, and that she doesn’t think he really wants to let it go.

Do you agree with her observation? What might the haint provide to Cha-Cha that

he otherwise lacks in his life?

Alice describes Cha-Cha as the prime minister of his family, and Viola as the

queen; she has the title, but is not concerned with day-to-day governance. What

is your impression of Viola when you first meet her in the novel, and how does

that impression change over time?

As the baby, Lelah thinks she has missed out on many of the best moments and

secrets in Turner family history. How might her role as the youngest have contributed

to her addiction to gambling? Do you think she has truly turned a corner by

Lelah and David become close very quickly. Why do you think Lelah is drawn

to David, and why does David not break things off when he finds out about Lelah

the novel. Did you get the impression that he is on the path to change? Why

Both Francis and Cha-Cha have a precarious relationship with belief, both in

religion and the supernatural. How does each character’s beliefs shift over time,

and what effect do those changes have on their relationship to others?

worsened condition. What do their reactions tell us about their similarities and

differences? What do we learn about their roles in the family?

The move from Arkansas to Detroit is very important to Turner family history,

moved North during the Great Migration. How is Francis and Viola’s relationship

changed by the move? How do the challenges they face in Detroit contribute to

the way they raise their children?

At its core, do you see the Turners as a strongly bonded family? What does it

mean for a family to be bonded, especially when people move further away from

one another and start their own families?