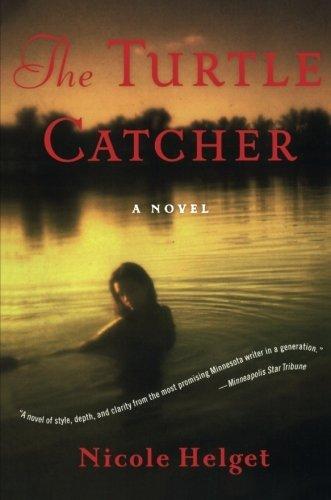 Two misfits from warring clans come together in a rural Minnesota town of German immigrants during the tumultuous days of World War I. Liesel, the one girl in the upstanding family of Richter boys, harbors a secret about her body that thwarts all hope for a normal life. Her closest friend is Lester, the “slow” boy in the raffish Sutter family, a gentle, kind soul who spends his days trapping turtles in the lake. Yearning for human touch in the wake of her parents’ deaths, Liesel turns to her only friend – leading her brother, just returned from the war,

Two misfits from warring clans come together in a rural Minnesota town of German immigrants during the tumultuous days of World War I. Liesel, the one girl in the upstanding family of Richter boys, harbors a secret about her body that thwarts all hope for a normal life. Her closest friend is Lester, the “slow” boy in the raffish Sutter family, a gentle, kind soul who spends his days trapping turtles in the lake. Yearning for human touch in the wake of her parents’ deaths, Liesel turns to her only friend – leading her brother, just returned from the war, to an act that will haunt not only both families but the entire town.

Born in 1976, Nicole Lea Helget grew up on a farm in southern Minnesota, a childhood and place she drew on in the writing of her memoir, The Summer of Ordinary Ways. She received her BA and an MFA in creative writing from Minnesota State University, Mankato.

Based on the novel’s first chapter, NPR‘s Scott Simon awarded The Turtle Catcher the Tamarack Prize from Minnesota Monthly.

“…Helget establishes the setting beautifully, pulling the reader immediately into the social milieu of the small town, and even if her prose can veer into preciousness, the novel is, on balance, melancholy but enjoyable.” —Publisher’s Weekly

“Historical fiction with a slight touch of magical realism, The Turtle Catcher is a moving portrait of difficult times and vividly realized characters.” —Jessica Moyer, Booklist

“Stunning…The Turtle Catcher is a novel of style, depth, and clarity from the most promising Minnesota writer in a generation.”
—Minneapolis Star Tribune

The structure of The Turtle Catcher is not exactly linear; the book opens with Lester’s death. Did you feel differently reading about Lester’s murder at the end of the book than you did at the beginning? Did the crime seem more, or less, heinous to you after you knew the story and these characters?

“In this place and just after the war, punishment of criminals was mostly left to individuals” (p. 6). We see a long history of vigilantism in New Germany, not only after the war but from the town’s inception. Where are some examples of vigilantism in the book? What are the dangers of vigilante justice? Have you ever taken the law into your own hands? Generally, “vigilantism” has a negative connotation and “civil disobedience” a more positive connotation. Are there any similarities between vigilantism and civil disobedience?

At the beginning of the book, we are told that Herman has returned from the war with a sense of “rectitude” (p. 11), a definite sense of right and wrong: “a man could not hesitate to rid the world of evil” (p. 11). When we return to this time at the end of the book, how is Herman’s state of mind portrayed? Do you think that experiencing war would make you see the world in black-and-white terms, or would you be more likely to be ambivalent about good and evil?

“Drowning was peaceful.” “It is a mercy what we did to him” (pp. 12, 18). These are among the ways the boys justify what they did to Lester. Where can you find other justifications of violence in the book? Are the justifications ever valid?

“Each man tucked this day . . . into the oldest, hardiest lobe of his brain, the part where memories don’t die but fester, the part of the brain that allows experiences to seep into daydreams and night dreams, into afternoon sweats and nocturnal terrors” (p. 18). Do you agree that hidden memories “don’t die but fester”? (What else might “fester”? Consider Langston Hughes’s poem “A Dream Deferred”: “What happens to a dream deferred? // Does it dry up / like a raisin in the sun? / Or fester like a sore . . . ?”) How does the idea of festering secrets recur throughout the book? In each of these situations, can you understand why the character kept the secret? How did keeping the secret help or harm the character?

When describing the history of Maggie and Frieda’s family in Germany, we learn that Frieda had an uncle she was close to who was a transvestite. Do you think the author meant to imply that Liesel’s hermaphrodism was hereditary? Maggie never liked her uncle Boris; do you think that Frieda would have been more sympathetic to Liesel’s condition?

“Magdalena had intense, contradictory feelings for the girl: repulsion, love, hate, guilt, shame, affection. Mostly fear” (p. 57). Can you imagine having such a range of feelings for your child? Maggie claims at some points that she withholds love from Liesel in order to train her to do without love. What do you think of Maggie’s logic? How do you think her mother’s feelings toward her affected Liesel?

When World War I broke out in Europe, the United States was officially neutral. But in immigrant communities like New Germany, the war doesn’t seem so far away. Do you sympathize with the conflicted loyalties of the citizens of New Germany? Do you think that Archie and Frieda Richter’s pacifism is an appropriate response? What about other wars in America’s history — do you think that immigrants from the countries with whom the United States is at war should necessarily be suspect?

Before the United States enters the war, Sutter sends some of his sons to enlist in the Canadian army. What are his reasons for doing this? What do you think are the motivations for soldiers to enlist? Do these motivations complicate the ethics of war?

When the United States does get involved in the war, the citizens of New Germany find themselves restricted in ways they weren’t before the war. “The leaders in St. Paul declared the German language a treasonous tongue. They declared German-run schools illegal. They declared the Nonpartisan League illegal. They prohibited the private meetings of German citizens” (pp. 132–133). Do you think these restrictions are fair? Can you think of similar restrictions that the government or communities impose on certain groups today? Do you think those restrictions are fair?

Harald Sutter starts a citizens’ group called the Watchdogs. Can you think of similar groups acting today? “Sutter had little trouble rustling up others to join his Watchdogs. He had only to ask men who’d lost even a single acre to Richter” (p.135). What is the author saying about the motivations of the Watchdogs? Do you think similar motivations are at play today?

On page 157, Sutter tosses a lit match on the ground after lighting his cigarette. Is this an act of symbolism in the book? Is it foreshadowing? On page 171, Luther drives his father’s new tractor in an antiwar parade. “In the New Germany antiwar parade, the tractor would be a symbol of the hearty, productive German people. And Luther . . . seemed suited to drive it, and seemed best suited to represent German stock too, with his strong body and blond hair.” Again, what does this act seem to foreshadow?

Finally, what do you make of the novel’s supernatural element, that of the swampy ghost of Lester Sutter? Do you think we are supposed to take the presence of his ghost literally? What might Lester symbolize for this community?