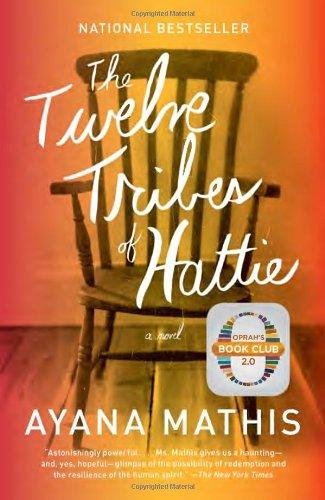 THE TWELVE TRIBES OF HATTIE

In a sweeping tale that moves forward and backward in time across sixty years in Georgia and Philadelphia, Ayana Mathis’s extraordinary first novel tells the story of an unforgettable family—and an indomitable woman—caught in singular moment in American history.

In 1923, fifteen-year-old Hattie Shepherd, hoping for a chance at a better life, flees Georgia and settles in Philadelphia with her twin babies. Instead, she watches helplessly as they succumb to an illness that a few pennies might have prevented. Hattie gives birth to nine more children whom she raises with grit and mettle and not an ounce of the tenderness they crave,

In a sweeping tale that moves forward and backward in time across sixty years in Georgia and Philadelphia, Ayana Mathis’s extraordinary first novel tells the story of an unforgettable family—and an indomitable woman—caught in singular moment in American history.

In 1923, fifteen-year-old Hattie Shepherd, hoping for a chance at a better life, flees Georgia and settles in Philadelphia with her twin babies. Instead, she watches helplessly as they succumb to an illness that a few pennies might have prevented. Hattie gives birth to nine more children whom she raises with grit and mettle and not an ounce of the tenderness they crave, fearing a show of tenderness would inadequately prepare them for the calamitous difficulty they are sure to face in their lives. True to Hattie’s expectations, the Shepherd children confront desolation, poverty, and the coldness and cruelty of their time. Floyd and Franklin battle inner demons in music halls and in the jungles of Vietnam; Bell, ruinously ill, awaits death but discovers salvation from an unexpected source; Alice and Billups wrestle with a secret history that threatens to undo them both; and Ella and Ruthie—one of whom escapes to a brighter life, at a devastating cost—are caught in the vortex of their mother’s deepest passions.

Hattie’s children, her tribes, are the children of the Great Migration. Their lives, captured here in twelve distinct and soaring narrative threads, tell the story of a mother’s monumental courage and the journey of a nation.

Ayana Mathis is a graduate of the Iowa Writers’ Workshop and is a recipient of the Michener-Copernicus Fellowship. The Twelve Tribes of Hattie is her first novel. Originally from Philadelphia, she lives in Brooklyn.

“Piercing…Ms. Mathis writes with uncommon narrative authority in The Twelve Tribes of Hattie, conjuring the lives of the Shepherd family with extraordinary psychological precision…Ms. Mathis has a gift for imbuing her characters’ stories with an epic dimension that recalls Toni Morrison’s writing, and her sense of time and place and family will remind some of Louise Erdrich, but her elastic voice is thoroughly her own – both lyrical and unsparing, meditative and visceral, and capable of giving the reader nearly complete access to her characters’ minds and hearts…Astonishingly powerful.”—Michiko Kakutani, The New York Times, “10 Favorite Books of 2012”

“The opening pages of Ayana’s debut took my breath away.I can’t remember whenI read anything that moved me in quite this way, besides the work of Toni Morrison.”—Oprah Winfrey

“Lush yet deliberate…elegant and sure…a complex and deeply humane story of a mother’s ferocious love and failures at loving…In the vivid specificity of Mathis’s tale, she is telling a universal story, and it is profoundly consoling.”—Laura Collins-Hughes, The Boston Globe

“Mathis never loses touch with the geography and the changing national culture through which her characters move. The Twelve Tribes of Hattie is infused with African Americans’ conflicted attitudes about the North and the South during the Great Migration…In the long family arc that Mathis describes, the painful life of one remarkably resilient woman is placed against the hopes and struggles of millions of African Americans who held this nation to its promise…One of the best [novels] of 2012.”—Ron Charles, The Washington Post

Hattie is, by any measure, a complicated, difficult woman. Did you love her, hate her, find it difficult to have sympathy for her? Is she a good mother? Why or why not?

Why do you suppose the author chose to have Philadelphia and Jubilee die in the novel’s first chapter? The novel moves backward and forward in time. What function is served by showing us this loss at the outset? How does this serve the novel and inform our understanding of Hattie?

“In Georgia the preacher had called the North a New Jerusalem. The congregation said he was a traitor to the cause of the southern Negro. He was gone the next day on a train for Chicago. Others, too, were going, disappearing from their shops and their fields. All of those souls, escaped from the South, were at this very moment glowing with promise in the wretched winters of the cities of the North. Hattie knew her babies would survive. Though they were small and struggling, Philadelphia and Jubilee were already among those luminous souls, already the beginning of a new nation.” Discuss this passage in relation to the novel’s themes. In fact, Hattie is mistaken here; her babies do not survive. What does this say about the provenance of the new nation of which she speaks?

Six perceives his spiritual gifts as an affliction, entangled with his physical suffering, and likens his moments of communion to seizures and fits. “What was grace if it came on him like a seizure that left him as frail and hurting as he had been before its visit? His experience of God was a violent surge he couldn’t control…if he’d known how to pray, Six would have asked God to take his gift away.” Elsewhere, he describes himself as a “ruined instrument” of God. What is your understanding of Six’s spirituality? Does he have the power to heal? How do you think the author views him, and what do you think happens to him in the future? Does the author provide another glimpse of him in the novel, and if so, what does she suggest about his fate?

In one of the novel’s most dramatic and revealing chapters, Hattie leaves August with the older children and escapes with baby Ruthie (then called Margaret) and her lover, Lawrence. How did this make you feel? Were you hoping she would stay with Lawrence or go back to August and the children?

“Lawrence understood her. It seemed to him that every time he made one choice in his life, he said no to another. All of those things he could not do or be were huddled inside of him; they might spring up at any moment, and he would be hobbled with regret. He pulled to the shoulder of the rode and held her. She was a beating heart in his hand.” What is at stake in this moment, for each of them?

What do you learn in the chapter called “Ruthie” about August as a husband? As a father? As a man?

Does August change throughout the course of the novel? Do you feel differently about him at the novel’s end than at the beginning?

Discuss the disagreement between Hattie and August in the chapter “Ruthie” about Cassie learning to play piano. Cassie’s teacher agrees to teach her for free. Hattie rejects the offer, saying that “it wasn’t practical for a Negro girl to fill her head with music.” August feels it’s a mistake to take away her dreams. Who is right? Look in particular at their disagreement and at the passage on page 88 in which August ponders their predicament and the question of what it means to have “a better life.” What do you think it means, in this context, to have a better life?

What kind of marriage do Hattie and August have? Look at the scene in which Hattie returns from Baltimore. Were you surprised that August took her back, with, as he says, “another man’s baby in her arms? Anyone would agree that he ought to do something terrible to her, but she had been gone fifteen hours, and in that fifteen hours his life had crumpled like a lump of dry earth.” What has August learned in Hattie’s absence? Look also at the chapter’s ending, in which Mathis writes: “It was not an invite to embrace but a resignation, as if to say, here we are; this is all we have…There were too many disappointments to name and too much heartbreak. They were beyond punishment or forgiveness, beyond what they had inflicted each other, beyond love.” What does it mean to be beyond love? Consider as well Hattie’s confession in the chapter “Ella,” in which she describes “her body’s insistence on a man who was the greatest mistake of her life.”

Discuss the scene in which Pearl and Benny are interrupted during their picnic by a group of white men. How did you feel about Benny’s choices? Does Pearl have a right to be angry? What do you think you would have done in these circumstances?

Reread the anguished scene in which Hattie and August give Ella to Marion and Benny. August tells Hattie, “We had that pain…and we’ll have this too.” Did they do the right thing? Was this chapter tragic? Hopeful?

Why does Franklin throw his letter to Sissy into the bay? Is this an act of cowardice, or could it be read as heroism?

In one of the novel’s climactic moments, Hattie and Lawrence bump into each other in a department store, and she discovers that Lawrence is romantically entangled with her daughter Bell. Why does Bell seduce Lawrence? What does she hope to achieve? What, if anything, does she learn about herself after her mother discovers her affair?

How is Bell different from her sisters and brothers? How is her relationship with Hattie different? How has her relationship with her mother defined her? Look in particular at the passage on page 212, in which Mathis writes: “Adulthood brought Bell a kind of freedom but no relief. She felt defective in some vital way, incapable of doing the right thing. She was constantly afraid that some force would strike her down for her failings.” Look also at the extraordinary passage on page 217: “Ruthie had said once that Bell and Hattie were just alike. It wasn’t true. Hattie was stronger than Bell could ever be. She didn’t know how to tend to her children’s souls, but she fought to keep them alive and to keep herself alive. That was more than Bell could say. All of them—Hattie and Willie and Evelyln and even crazed, ruined Walter—were like little lights; sparks flying upward in dark places, trying to stay alight though they were compelled toward ash.”

Race, poverty, history, class—Ayana Mathis speaks to all of these in The Twelve Tribes of Hattie and subtly complicates our understanding of the forces and conditions that drove political and social reform in the first part of the twentieth century. An argument could be made that the new North was built on the backs of Hattie’s children. Discuss this idea.

Why does Hattie refuse to let Sala take the mercy seat?

Reread the novel’s final paragraph. Is this a happy ending or a heartbreaking one? Resigned, or hopeful? Did you feel differently about Hattie in the novel’s last lines? Has she changed?

How do you imagine Sala’s life might differ from the lives of her aunts and uncles? What do you think the author is suggesting thematically through the character of Sala, who, although a generation removed, is Hattie’s essential twelfth tribe?