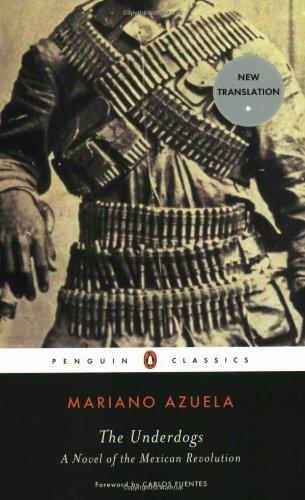 The Underdogs is the first great novel about the first great revolution of the twentieth century. Demetrio Macias, a poor, illiterate Indian, must join the rebels to save his family. Courageous and charismatic, he earns a generalship in Pancho Villa’s army, only to become discouraged with the cause after it becomes hopelessly factionalized. At once a spare, moving depiction of the limits of political idealism, an authentic representation of Mexico’s peasant life, and a timeless portrait of revolution, The Underdogs is an iconic novel of the Latin American experience and a powerful novel about the disillusionment of war.

The Underdogs is the first great novel about the first great revolution of the twentieth century. Demetrio Macias, a poor, illiterate Indian, must join the rebels to save his family. Courageous and charismatic, he earns a generalship in Pancho Villa’s army, only to become discouraged with the cause after it becomes hopelessly factionalized. At once a spare, moving depiction of the limits of political idealism, an authentic representation of Mexico’s peasant life, and a timeless portrait of revolution, The Underdogs is an iconic novel of the Latin American experience and a powerful novel about the disillusionment of war.

Mariano Azuela was born into a grocer’s family in Lagos de Moreno, Mexico, on New Year’s Day, 1873. As a boy, during summers spent at a small farm owned by his father, he learned the slang and vocal rhythms of the common people—effects he was later to reproduce in his fiction. Although he enrolled in a Catholic seminary at fourteen, Azuela soon abandoned his religious studies and, after a brief period of indecision, became a medical student at the University of Guadalajara. After becoming a doctor in 1899, Azuela divided his energies between medical practice and writing. The 1908 publication of his novel Los Fracasados (The Failures) identified him as a novelist of promise.

In 1910, Azuela’s peaceful pursuits were disrupted when a revolutionary force under Francisco Madero overthrew the repressive dictatorship of Porfirio Díaz. Azuela, who sided with the Maderistas, briefly served the Madero regime as chief of political affairs in Lagos de Moreno. However, in 1913, in the counterrevolution led by Victoriano Huerta, Madero was assassinated and Azuela joined the rebel forces of Pancho Villa. As the result of a series of experiences similar to those of Luis Cervantes, a character in The Underdogs, Azuela became head of the medical staff in the revolutionary army of General Julián Medina, who served as an inspiration for another character in The Underdogs, Demetrio Macías. Forced to immigrate to El Paso, Texas, Azuela settled there and reworked his memories of the revolution into a novel, Los de Abajo, known to English-speaking readers as The Underdogs. In 1917, Azuela moved to Mexico City, where he continued to write and practice medicine for the rest of his life.

Initially slow to win a popular following, The Underdogs captured international critical acclaim in the mid-1920s, establishing Azuela as the preeminent novelist of the Mexican Revolution. In 1942, Azuela was honored with Mexico’s national prize for literature, and, in 1949, he received the national prize for arts and sciences. He died in 1952.

“An essential book for Mexico, about the first revolution of the twentieth century. Mariano Azuela’s pen is a warm gun, and Sergio Waisman’s translation, introduction, and notes are as vivid, well aimed, and sharp as the gunshots in the battle.” —Elena Poniatowska

“A classic novel of the Mexican Revolution, The Underdogs is a work not only of unquestionable artistic value, but also of courage, sensitivity, and dedication by a writer of great literary and historical significance.” —President Vicente Fox

“A lively translation of a Latin American classic that takes us into Mexico’s violent and spirited first days.” —Julio Ortega, Brown University

“The Underdogs is one of the most original attempts at inventing a revolutionary style to narrate the upheaval unleashed by the Mexican Revolution. Sergio Waisman’s brilliant translation replicates the rapid-fire intensity of Mariano Azuela’s Spanish prose. Required reading for anyone interested in twentieth-century history.” —Ruben Gallo, Princeton University

In the first chapter of The Underdogs, Macías has a chance to kill the Federales who will soon after come back and destroy his house. However, he lets them go, and the only explanation he gives is that it was not the Federales’s time to die. What do this choice and this explanation show about Macías’s character? Do these traits remain consistent throughout the novel?

Some translators of The Underdogs have chosen to leave the nicknames of Macías’s men in their original Spanish. How does translator Sergio Waisman’s choice to translate the names, for instance, turning “el Manteca” into “Lard” and “Cordoniz” into “Quail,” affect the reading of the book? Do you prefer seeing the names translated or untranslated? Why?

Early in the novel, Macías and twenty of his followers fire two rounds at an ambushed group of Federales and, somewhat astonishingly, every single shot results in a deadly wound. Why do you think Azuela attributes such incredible accuracy to Macías and his men? Does his building up of their legend detract from the realism of the novel? Does Azuela overly idealize Macías and the revolution during Part One of the novel?

Although the captured curro Luis Cervantes promptly identifies himself as a medical student, several scenes pass before it occurs to anyone in Macías’s band that he might treat Macías’s gunshot wound. What accounts for this slow response, and what does it suggest about the social gap that separates the curro from the other men who fight alongside Macías?

After having lived among Macías’s men awhile, Cervantes States his belief that Macías has not yet understood the importance of his role in the revolution—what Cervantes calls Macías’ “true . . . high . . . most noble ambition.” What prevents Macías from seeing his mission as Cervantes sees it? How is the limitation of Macías’s vision emblematic of the shortcomings of the revolution?

Although The Underdogs contains a few significant female characters, it remains fundamentally a man’s novel. Does Azuela do enough to represent the position of women in Mexican society and in the revolution? What, if anything, would you have done differently to tell this aspect of the story?

Having been a doctor in Julián Medina’s army, which served Pancho Villa during the revolution, Mariano Azuela had much in common with his character Luis Cervantes. Do you think Azuela uses Cervantes to express points of view that were likely to have been similar to Azuela’s? When? How does Cervantes’s opinion of the revolution change as the novel develops?

Discuss the relationship between Macías and Cervantes. What do they gain from each other? Does each have something to teach that the other is incapable of learning? What, if anything, is lacking in their friendship?

It is a principal irony of The Underdogs that the revolutionaries who set out to rid their country of oppression and injustice end up adopting the corrupt values and practices of their enemies. Why does this happen? Does Azuela regard the betrayal of the revolution as inevitable, or does he see an alternative?

Imagine that you are directing a film version of The Underdogs. What scene would you find most interesting to dramatize, and why? How would you shoot the scene?

What do you think of Cervantes’s decision to leave the revolutionaries and immigrate to El Paso? Is he to be praised for abandoning a cause he could no longer morally support, or is he to be condemned for leaving his comrades in a desperate time?

Toward the end of The Underdogs, Macías and his men begin to encounter government forces armed with machine guns. What does the rise of modern warfare signify for men like Macías, and for the future of revolutionary uprisings in general?

In the next to last chapter of the novel, Macías tells his wife that, having started on a violent path, he can no more stop fighting in the revolution than a pebble tossed into a canyon can stop falling. What are the qualities of this image that make it effective and memorable? Do you think Macías is right?

At the end of the novel, as Macías boldly defends himself in a last desperate battle, it seems likely that he will be killed at any moment. However, instead of narrating Macías’s death, Azuela leaves the reader with the image of him still fighting. What is the effect of this choice on the way the reader finally perceives Azuela’s hero and the revolution for which he fights?