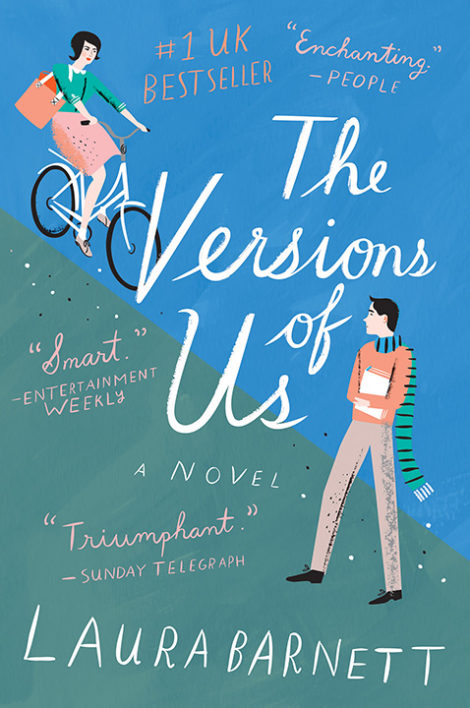 THE VERSIONS OF US

The one thing that’s certain is they met on a Cambridge street by chance and felt a connection that would last a lifetime. But as for what happened next . . . They fell wildly in love, or went their separate ways. They kissed, or they thought better of it. They married soon after, or were together for a few weeks before splitting up. They grew distracted and disappointed with their daily lives together, or found solace together only after hard years spent apart.

The one thing that’s certain is they met on a Cambridge street by chance and felt a connection that would last a lifetime. But as for what happened next . . . They fell wildly in love, or went their separate ways. They kissed, or they thought better of it. They married soon after, or were together for a few weeks before splitting up. They grew distracted and disappointed with their daily lives together, or found solace together only after hard years spent apart.

With The Versions of Us, Laura Barnett has created a world as magical and affecting as those that captivated readers in One Day and Life After Life. It is a tale of possibilities and consequences that rings across the shifting decades, from the fifties, sixties, seventies, and on to the present, showing how even the smallest choices can define the course of our lives.

Laura Barnett is a novelist, short story writer, journalist, and theater critic. She was named one of the Observer’s New Faces of Fiction in 2015. She has written for the Daily Telegraph, the Guardian, and Time Out London and is the author of Advice from the Players, a compendium of advice for actors. Barnett’s debut novel, The Versions of Us, debuted in the UK in June 2015 and was an immediate bestseller. The book was named Waterstones’ Fiction Book of the Month for June 2015 and was chosen for the prestigious Richard and Judy Book Club and Waterstones’ Book Club in 2016.

To invite Laura to join your next book club meeting via Skype, contact Hannah Harlow at hannah.harlow@hmhco.com.

“A rich, complex, and deeply satisfying novel… One of the most engrossing novels either of us has read in years.”—Richard Madeley, The Richard and Judy Book Club

“Its very scope is a joy, the technical achievement seamlessly done, and the ending—all the endings—suitably affecting.” —The Guardian

“A triumphant debut . . . A thoughtful, measured book about the interplay of change and destiny in our lives. In addition to its original structure, the novel offers candid insights into the effects of status on love.”—Sunday Telegraph

“Truly enthralling—the spirit of The Versions of Us has lingered with me. The way Laura Barnett manages to weave together such detailed and compelling threads is extraordinary and she finds such poignancy in the everyday. I felt drawn in by the stories of Jim and Eva and the novel really got me thinking about all the lucky chances we get to start over, and how we live in a state of constant flux. I simply adored this wonderful novel.”—Jessie Burton, author of The Miniaturist

The book opens with two scenes that take place in 1938. What do the two scenes share in common? How do they compare to the storylines between Eva and Jim that follow? What major themes of the novel are introduced in these opening sections?

In Version 2: Algonquin, New York, November 1963, Eva realizes that her life has not gone as she had imagined it would. How has her life failed to match up to her expectations? Where else are Eva’s and Jim’s expectations challenged or upended in the novel?

In Version 3: Sandworms, Suffolk, October 1966, Miriam tells Eva that she can tell that Eva is not happy in her marriage. What advice does Miriam give her daughter? Do you think it is good advice? Does Eva accept Miriam’s advice or reject it?

In Version 3: Frost, Cornwall, October 1966, Jim says that “he is old enough to know happiness for what it is” (142). How does he believe happiness is defined and how does his idea of happiness in this chapter compare to other depictions of happiness throughout the book? Does the book seem to settle on any single definition of happiness? If so, how does the book suggest happiness can be attained?

In Version 3: Thirty, London, July 1971, David tells Eva that she should be writing and she replies, “It’s always simpler for a man” (166). Do you agree with her? Why or why not? What do the other versions of the story suggest about gender and the workplace or gender and success?

Explore presentations of marriage and love in the novel. How are each defined and depicted? What does Sinclair learn about marriage in Version 1 as he cares for Vivian? Does the book define what a “good” marriage entails or what the best kind of love is?

What is the role of art in the book? Which of the characters are artists and why do they undertake their artistic pursuits? What purpose do they find in their art? What obstacles do they face as artists? How does their artwork or role as artist shape and inform their identity?

The title of the novel is taken from the name of a triptych painted by Jim. What is the subject of the triptych and why is it significant both to Jim and to those who view it? How might it serve as a major symbol within the novel?

Thinking about the various settings of the novel, how do the times and places depicted in the novel mirror or help to reveal major themes of the story?

In Version 3: Afterglow, Los Angeles, December 1977, what does Eva say that she realizes about motherhood? What does she believe makes the best mother and why? Do you agree with her? What do the other versions of the story seem to suggest?

What are some of the examples of infidelity in the novel? What causes or motivates the various characters to stray from their partners? How do these infidelities or betrayals impact their lives and the lives of those they are unfaithful to? Are any of the characters rewarded for seeking their own happiness?

Discuss how the book creates a dialogue around fate and accident versus choice. How much control do the characters have over their own lives and how much is left to chance?

Look at the structure of the novel. Why do you think the author chose to set up the novel in three sections? What themes does this structure help to reveal or reinforce? How would your understanding of the novel be different if Barnett had implemented a different structure—telling each story without division, for example?

The novel covers a large expanse of time and includes characters of several generations. Consider the similarities and differences between characters of different generations in the novel. How are Eva and Jim like their parents and how do they differ? What, if anything, remains consistent over the passage of time between generations? Does the novel suggest whether we are simply doomed to repeat the past, or does it suggest, rather, that there is room for change?

What kinds of loss are depicted in the book and how do the characters deal with these losses? Does the book offer any view of the best way to grieve or confront loss? Does anything positive seem to come from the characters’ processes of grieving?

How do the three final chapters work together as a cohesive ending? What final message or messages—or questions—do they seem to impart when considered collectively? Do the last three chapters draw the various pieces of the book into a unified whole or present three contradictory conclusions?