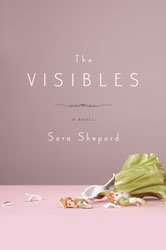 The only piece of information that Summer Davis takes away from her years at Peninsula Upper School—one of the finest in the Brooklyn Heights-to-Park Slope radius, to quote the promotional materials—is the concept that DNA defines who we are and forever ties us to our relatives. A loner by circumstance, a social outcast by nature, and a witty and warm narrator of her own unimaginable chaos by happenstance, Summer hangs on to her interest in genetics like a life raft, in an adolescence marked by absence: her beautiful, aloof mother abandons the family without a trace; her father descends into mental illness,

The only piece of information that Summer Davis takes away from her years at Peninsula Upper School—one of the finest in the Brooklyn Heights-to-Park Slope radius, to quote the promotional materials—is the concept that DNA defines who we are and forever ties us to our relatives. A loner by circumstance, a social outcast by nature, and a witty and warm narrator of her own unimaginable chaos by happenstance, Summer hangs on to her interest in genetics like a life raft, in an adolescence marked by absence: her beautiful, aloof mother abandons the family without a trace; her father descends into mental illness, haunted by a lifelong burning secret and abetted by a series of letters that he writes to make sense of his feelings; her best friend Claire drifts out of Summer’s life in a breeze of indifference, feigned on both sides; and her older brother fluctuates between irrational fury and unpredictable tenderness in an inaccessible world of his making.

Uncertain of her path and unbalanced by conflicting impulses toward hope and escape, Summer stays close to her father while attending college, taking him to electro-shock therapy treatments and trying to make sense of his inscrutable past. Upon his departure for a new and possibly recovered life, Summer begins to question the role of genetics and whether she is destined to live out her family’s legacy of despair. But it is only when Summer decides to leave New York herself and put off a promising science career to take care of her great-aunt Stella—bedrock of the family and bastion of folksy wisdom, irreverent insight, and Sinatra memorabilia in a less-than-scenic part of the Pennsylvanian countryside—that Summer begins to learn that her biography doesn’t have to define her…and that her future, like her DNA, belongs to her alone.

In a novel consumed by the uncertainties of science, the flaws of our parents, and enough loss and longing to line a highway, Sara Shepard is a penetrating chronicler of the adolescence we all carry into adulthood: how what happens to you as a kid never leaves you, how the fallibility of your parents can make you stronger, and how being right isn’t as important as being wise. From the backwoods of Pennsylvania to the brownstones of Brooklyn Heights, The Visibles investigates the secrets of the past, and the hidden corners of our own hearts, to find out whether real happiness is a gift or a choice.

Sara Shepard received an MFA in fiction writing from Brooklyn College and is the author of the young adult series Pretty Little Liars, a New York Public Library Notables selection. She lives in Philadelphia, Pennsylvania. This is her first adult novel.

“The Visibles is that rarest of accomplishments — a novel that pulls you into its world, then just…keeps…getting…better. Sara Shepard writes with a grace and ease, but don’t be deceived — the big stuff is in here: coming of age; New York in the nineties; the complications of family and friendship; illness and ambition; hope and disappointment and redemption. On every page you’ll find an architect’s control, a painter’s eye, a dancer’s elegance, and, best of all, an unending well of generosity. The Visibles is what you want from fiction. Enjoy.”
—Charles Bock, author of Beautiful Children

“Summer Davis’s childhood and its mysteries will entrance you. Within moments of beginning to read her story, she will become your closest friend and most trusted confidante. You will want to immerse yourself in her story and grow up with her and discover life with her over and over again.” — Ben Schrank, author of Miracle Man and Consent

Sara Shepard delivers a tight mystery disguised as an arresting coming of age story. Her narrator is sharp, edgy, and sad — just like all the best ones are. Summer Davis sneaks up on you, gets into your head, and stays there.” —Amy Bryant, author of Polly

When they are growing up, how are Summer and Claire similar and different? When they meet years later, how does Summer interpret the changes that each has gone through? Are they more alike later in life? What in Summer draws her to reconnect with Claire?

Periodically throughout the book, another voice enters the story. What effect did this have on your reading? When did you realize who the voice was and why it was important?

The lower Manhattan skyline appears throughout the novel, both for its parts — the tower Meredith worked in, the nicknames Summer and Claire gave certain buildings — and its whole, especially after 9/11. What do you think the skyline represents to Summer? Does its symbolism change as the novel progresses?

In the beginning of the novel, Summer’s brother, Steven, barely reacts to their mother’s disappearance. The next time we meet him, he is deeply and perhaps irrationally motivated by the first World Trade bombing. Then he is indifferent and unavailable, but by the end of the book, he has changed again. Has he adjusted better than Summer has by the novel’s close? What drives his changes and behavior throughout the years?

What was the effect of reading the storyline through Summer’s eyes? How would it have been different if her father had done all of the narrating? Or Stella?

What keeps Summer from feeling completely comfortable with Philip?

Has Summer been shaped more by her genes or by her past experiences? Why do you feel that way? In this story, and in life, how important are accidents, genetic and otherwise, to the shaping of a person?

“Faith, I thought. Yet again, I turned everything over to faith…My father would eventually practice medicine again. My mother would wash up as something plain and somewhat pitiful, maybe a telemarketer or sales clerk, her drama career hitting a dead-end. We would get through this, and he’d come out a hero” (p. 139). Do you believe that Summer has faith? How does she express her faith? Does her faith change throughout the story?

Speaking of Alex, Summer says, “How could he love me? What had I done that was so incredible? I wanted to say that I loved him, too, but I knew I didn’t mean it, so the words wouldn’t come. I wasn’t sure if I was equipped to love anyone” (p. 188). Do you believe that Summer is not “equipped” to love during the course of the book? Why or why not? Is Summer capable of love by the end of the book? If so, what in her changed?

Throughout the story several characters — her mother, grandmother, and Stella — leave Summer’s life. How does she react to each? How does each loss change the way that she thinks? How does it affect the people around her?

When did you discover Summer’s father’s secret? How did you react? Did you expect it? Do secrets have the capability to shape our lives more than truth? How and why?

“I am still me, I told you. We are the worst of ourselves and also the best. They can try and shock it out of you, but it doesn’t really go away, not entirely. And that’s okay” (p. 253). What does the narrator of this section mean by this? Do you believe it to be true? Why or why not?

Whose story is this? Is it Summer’s story or is it her father’s? Who changes the most from the beginning to the end?

The use of ECT was controversial even in its heyday in the 1940s and 1950s. Earlier than that depression itself was not seen as a disease. How do you think the timing of his illness affected Richard Davis? Do you think he would be treated similarly today?

Stella investigates alternative medicine at the end of her life. Are there controversial medical practices today that you believe are worthwhile?