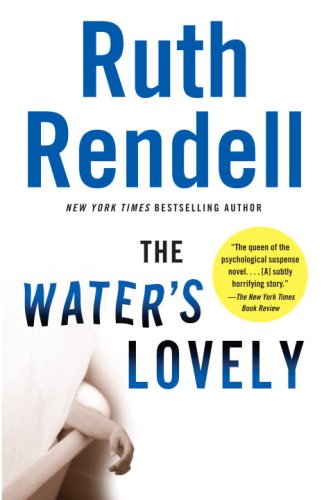 When Ismay and Heather’s stepfather was discovered dead in the bathtub nine years ago, the police concluded the drowning was an accident. But Ismay has always silently suspected that Heather might have had something to do with it. Now they’re older and their lives seem to be moving happily forward. But when Heather becomes seriously involved with a man for the first time, Ismay’s long-repressed memories can no longer be ignored. With painful inevitability, Ismay learns that she may not able to keep the dark truth hidden forever.

When Ismay and Heather’s stepfather was discovered dead in the bathtub nine years ago, the police concluded the drowning was an accident. But Ismay has always silently suspected that Heather might have had something to do with it. Now they’re older and their lives seem to be moving happily forward. But when Heather becomes seriously involved with a man for the first time, Ismay’s long-repressed memories can no longer be ignored. With painful inevitability, Ismay learns that she may not able to keep the dark truth hidden forever.

Ruth Rendell has won numerous awards, including three Edgars, the highest accolade from Mystery Writers of America, as well as three Gold Daggers, a Silver Dagger, and a Diamond Dagger for outstanding contribution to the genre from England’s prestigious Crime Writer’s Association. A member of the House of Lords, she lives in London.

“The queen of the psychological suspense novel. . . .This [is a] subtly horrifying story.”
—The New York Times Book Review

“An especially tricky and ingenious mystery. . . . Rich with parallels and shadows.”
—The New York Times

“Rendell is in absolute top form here. The Water’s Lovely is as suspenseful as any crime novel she has written, but it also has the generous humanity of her best Inspector Wexford cases.”
—The Washington Post Book World

“The creepiest thing in Ruth Rendell’s latest mystery, The Water’s Lovely, isn’t the murder . . . but the deep chill that can pervade human interactions.” —O, The Oprah Magazine

What was your impression of Ismay? Of Heather? Did you find them likable? How would you describe each girl?

Discuss the title of this book in light of Guy’s demise and Heather’s watery death. What might the symbolic meaning of water be here? Consider Christian baptism and the role of water in the forgiveness of sins. What sins are Heather, Ismay, and their mother guilty of? How are they punished?

Ten years after Guy’s death, Beatrix is nearly catatonic, but when she does speak she quotes fire-and-brimstone passages from the Bible. Why? Do you think Beatrix’s condition was brought on by Guy’s death? How is her silence both a haven and a prison?

Did you think that Ismay might be wrong about-or even responsible for-Guy’s death? What does she think was Heather’s reason for killing Guy? Why doesn’t she ever ask Heather for the truth?

Why doesn’t Heather like Ismay’s boyfriend, Andrew? Why do you think Andrew dislikes Heather?

Before he meets Heather, Edmund’s female influence is from his mother, Irene. How would you describe Irene? What are the sources of her many “illnesses”? Why does she want Edmund to become involved with her friend Marion? What kind of person is Marion? Why might Irene prefer Marion over Heather as a match for Edmund?

Although neither of them expects it, Edmund and Heather quickly fall in love. Ismay is also caught off guard. Do you think Ismay should have told Edmund of her suspicions regarding Heather’s involvement in Guy’s death? Put in a similar situation, would you tell your secret or keep what you suspect to yourself?

As teenagers, both Ismay and Heather are deeply affected by Guy’s presence in their lives—and by his death. How does his influence manifest itself in them as adults? Between Ismay, Heather, and Beatrix, which woman is least affected by the murder? Why?

Does remodeling the house to erase any trace of the room where Guy died help the family to move on? What do these physical changes represent on a symbolic level?

Do Ismay’s feelings for Guy excuse his behavior toward her? Do you think Heather was justified in killing Guy?

Do you think Ismay is jealous of Heather? Why?

Why is Andrew so opposed to sharing the flat with Heather and Edmund? What kind of man is he? What kind of boyfriend? Do you think he loves Ismay?

Instead of telling Edmund what happened to her stepfather, Ismay records her story using an old tape recorder. She stores the tape in the packaging for an old cassette no one listens to anymore. What do you think of this plan? Why would she keep the tape instead of destroying it?

After the murder, Ismay and Beatrix re-create what they believe happened between Heather and Guy. Why? How does this experiment affect them? Do you think Beatrix is a good mother?

Does Beatrix do the right thing by protecting Heather from the police?

We learn that Beatrix knew about Guy’s flirtation with Ismay. Do you think she also knew about his behavior toward Heather? Why was Beatrix especially vulnerable to Guy? How would you describe Pamela, Ismay and Heather’s aunt? How does low self-esteem affect both Beatrix and Pamela? Do you think Heather has low self-esteem? What about Ismay?

How are Marion and her brother, Fowler, alike? How are they different? Which of the two is more honest?

Why doesn’t Edmund tell Ismay that he has seen Andrew out with another woman? Do you think he should have? Do you think Ismay’s feelings for Andrew would have been affected by this knowledge?

How does the concept of “six degrees of separation” factor into the events of The Water’s Lovely? What roles do fate and chance play?

Why does Heather mention Tess of the d’Urbervilles to Edmund? Did the mention of Thomas Hardy’s classic novel provide a clue for you about her motivations for Guy’s murder? Why is Heather reluctant to confess to Edmund? Do you think she should have told him before they got married? In her place, would you have told him at all? Why or why not? How are Heather and Edmund affected by her confession?

Andrew leaves Ismay for a socialite named Eva Simber. Why does Heather contact her? What does this reveal about Heather? What is Ismay’s reaction when Eva is murdered later in the novel? Does her reaction reveal a flaw in Ismay’s character or is it a natural—though callous—response? Why do you think Andrew eventually comes back to Ismay?

The events of the novel culminate with Marion blackmailing Ismay. Does she pay off Marion to protect Heather or herself? What does Ismay have to lose? How does Ismay put an end to it?

Did you find the ending of The Water’s Lovely satisfying?