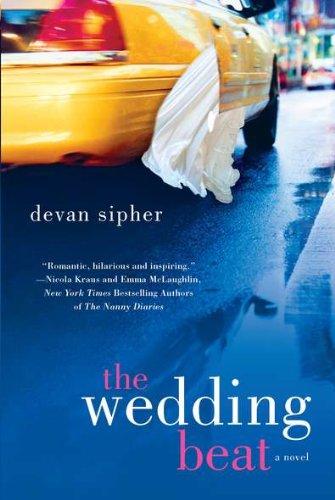 Sometimes the best man isn’t even in the wedding party…

Gavin Greene is a hopeless romantic. He’s also a professional one: he writes the wedding column for a Pulitzer Prize-winning newspaper, covering spectacular parties from coast to coast. But there’s a thin line between being a hotshot reporter on assignment…and being a single guy alone on a Saturday night at someone else’s wedding.

Everything changes on New Year’s when Gavin meets Melinda, a travel writer with enchanting dimples. A moonlit stroll across a Manhattan rooftop seals the deal. Until an Aussie with attitude swoops in and whisks her away before Gavin gets her number.

Sometimes the best man isn’t even in the wedding party…

Gavin Greene is a hopeless romantic. He’s also a professional one: he writes the wedding column for a Pulitzer Prize-winning newspaper, covering spectacular parties from coast to coast. But there’s a thin line between being a hotshot reporter on assignment…and being a single guy alone on a Saturday night at someone else’s wedding.

Everything changes on New Year’s when Gavin meets Melinda, a travel writer with enchanting dimples. A moonlit stroll across a Manhattan rooftop seals the deal. Until an Aussie with attitude swoops in and whisks her away before Gavin gets her number.

Gavin crisscrosses New York City to find her again. And he learns that there’s something worse than losing the woman of his dreams: Having to write an article about her wedding.

Devan Sipher has been writing about weddings for The New York Times’s “Vows” column for more than five years. He received a master of fine arts degree from the Tisch School of the Arts at New York University. He lives in New York City, and is still single.

“For any woman who devours the wedding section every Sunday, wondering when her own Mr. Right will come along, The Wedding Beat is a romantic, hilarious and inspiring story of the angst behind the announcements.”—Nicola Kraus & Emma McLaughlin, New York Times best-selling authors of The Nanny Diaries

“Filled with sharp observations, hilarious truths, and poignant moments. Reading The Wedding Beat is like sitting next to the wittiest guest at a wedding – a rare find!”—Beth Harbison, New York Times bestselling author of Shoe Addicts Anonymous

“Devan Sipher uses his journalist’s sharp eye for detail to take a delightful and fresh look at the romantic comedy genre. Go for a wild, hilarious ride-along with Sipher as he works The Wedding Beat.”—Jillian Lauren, New York Times bestselling author of Some Girls

“Romantic and charming, Devan Sipher’s debut novel The Wedding Beat is a fresh and fun take on finding (and committing to) love.”—Laura Dave, author of The First Husband

The Wedding Beat begins with a cry of “Help!” as Gavin Greene contends he’s being held captive at a black-tie wedding. However, Gavin is both a skeptic and a romantic—sometimes in the same paragraph—and his romantic nature wins out time and again. What was it like reading a male’s perspective on romance? Can you think of other fictional male protagonists who are romantics? Is this a trait you expect more from a female character? How did you feel about a man sharing his inner feelings and vulnerabilities about dating?

Gavin says that being alone is like having a scarlet letter, and it’s the first thing people notice. Is he right about that? How hard is it to be single at a social event where everyone is married? Is that something that gets easier or more difficult with age?

Mike Russo, the dating coach, compares dating to pollination and suggests that Gavin needs to “Be the bee.” Is this good advice? Does Mike’s bee theory reinforce old-fashioned stereotypes or does it acknowledge innate sex roles? Do you think this advice can be inverted for women? Is being “the flower” the way for women to attract the best mate? If a guy’s not willing to be the bee, does it mean “he’s just not that into you”?

Even when Gavin’s love life is a mess, he sustains an intimate relationship with Hope. Does their relationship help or hinder them when it comes to finding love? Though Gavin and Hope aren’t physically attracted to each other, should they have tried dating each other?

Laurel says the reason Gavin’s alone is his fear of ending up like his parents. Is that a reasonable fear for him to have? Do you think Gavin is being accurate and fair in his description of his parents? At Bernie’s funeral their behavior is particularly over-the-top. Does dealing with death bring that out in families? Are there any examples you’ve witnessed?

Why does Gavin have less conflict with his grandmother than with his parents? Why does her devotion to Bernie seem to frighten him? What does Gavin mean when he says he feels like he’s mourning the younger version of his grandmother? Have you ever felt that way about an elderly family member while they were still alive?

Melinda says she believes in doing one thing every day that scares her. Is that a healthy approach to life or a good way to get yourself killed? Over the course of the book, Melinda’s adventurousness seems to rub off on Gavin. As he climbs her fire escape he says “Something about Melinda made me want to be better than I was. Braver. And a little stupider.” Is that how love should feel or is that a romanticized ideal?

Does Gavin romanticize love because he writes about weddings, or does he write about weddings because of his romantic nature? Halfway through the book, Gavin gets accosted by Mike Russo’s best man, Brody, who accuses Gavin of writing fairy tales. Is Gavin contributing to the fantasy version of weddings that proliferates in movies, magazines and Web sites? How do such fantasies affect the expectations of married and single people?

At the Malibu wedding of Roxanne and Ari, Gavin describes “a petting zoo, where bleating sheep wore pink ribbons round their necks. It was a cross between wedding kitsch and animal cruelty.” Which do you think it is? What’s the most outlandish thing you ever saw at a wedding? Would you have liked to attend any of the weddings described in this book? If so, which? Would you like to have Gavin’s job? Would you enjoy attending weekly galas, or would you find it frustrating having to work at lavish parties where you can’t eat or drink?

What did you think of the strict professional and ethical standards at The Paper? Did it surprise you that those standards would apply to articles about weddings? How long do you think those standards will last in the world of continuous online news as old-school journalists like Renée retire or get laid off?

Do you feel Gavin and his peers were too submissive about the layoffs? How much should one put up with to keep a job? Do you believe Renée when she says it’s the best job on the planet? Why do you think she feels that way even after how she’s treated?

Throughout the book Gavin has a hard time making choices unless he’s able to fact-check first. But when he sees Melinda in her wedding dress, he says “Everything in life is a choice, and I was choosing to be happy.” What do you think he means by that? How does a person choose to be happy? Do you think Gavin and Melinda will be happy together?