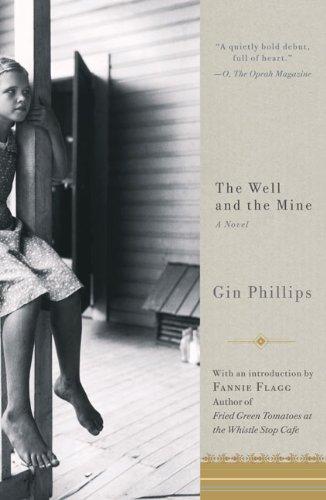 THE WELL AND THE MINE

In 1931, the United States has been plunged into the Great Depression for two years, but poverty and privation are already old acquaintances to residents of Carbon Hill, Alabama. Most local families have had too many mouths to feed for as long as they can remember, but when an unknown woman drops a baby into the Moore family well—with only nine-year-old Tess as a witness—the town is stopped in its tracks by the crime.

The Moores are better off than most. Along with most of the Carbon Hill men, Albert Moore labors in the mines,

In 1931, the United States has been plunged into the Great Depression for two years, but poverty and privation are already old acquaintances to residents of Carbon Hill, Alabama. Most local families have had too many mouths to feed for as long as they can remember, but when an unknown woman drops a baby into the Moore family well—with only nine-year-old Tess as a witness—the town is stopped in its tracks by the crime.

The Moores are better off than most. Along with most of the Carbon Hill men, Albert Moore labors in the mines, but he also owns and works a small patch of farmland which allows him to feed his wife, Leta, and his children, Virgie, Tess, and Jack, during the lean times. The family is also known and respected for being quick to help out with a bit of food or a loan—even as the requests become increasingly frequent—which makes the choice of their well even more puzzling.

No one believes Tess, at first, until a baby blanket pulled up in the bucket confirms her story. In no time, the town’s gossip-mongers descend upon their household. Unfortunately, the local police are more interested in harassing the town’s black population than finding the Caucasian baby’s mother. Tess becomes plagued by nightmares and feels certain that the dead infant boy is reaching out and asking her to “figure out who he was. Find who threw him in and give him some peace” (p. 50).

Albert and Leta are too busy keeping the house and farm together to soothe Tess’s fanciful imagination, so her fourteen-year-old sister, Virgie, comes up with a plan to track down the Well Woman—as she comes to be called. The two make a list of all the women they know who delivered babies in the last six months and begin insinuating themselves into their suspects’ lives. Their investigation doesn’t yield an immediate answer but it opens the sisters’ eyes to the complications of life beyond their own small household.

Gin Philips’ award-winning debut novel transports readers to a bygone time and place and introduces a cast of characters that comes vividly alive in all their humor, grace, and humanity. Reminiscent of the writings of Eudora Welty and Carson McCullers, with the emotional resonance of Sue Monk Kidd and Fannie Flagg, The Well and the Mine is rooted in the very best of southern writing but claims a territory all its own.

Gin Phillips lives in Birmingham, Alabama; The Well and the Mine is her first novel.

“A tight-knit miner’s family struggles against poverty and racism in Phillips’s evocative first novel, set in Depression-era Alabama. Throughout, she moves skillfully between the points of view…Phillips fully enters the lives of her honorable characters and brings them vibrantly to the page.” —Publishers Weekly

“Gin Phillips has a remarkable ear for dialogue and a tenderhearted eye for detail; you can hear the pecans and hickory nuts falling from the trees and feel the stillness of a hot summer night. A whisper runs through the novel—the ghosts of places and people and luscious peach pies.” — Los Angeles Times

“When you close the book, you’ll miss these characters. But The Well and the Mine doesn’t just give you characters who’ll stay with you—it gives you a whole world.” —Fannie Flagg, author of Fried Green Tomatoes at the Whistle Stop Café and Daisy Fay and the Miracle Man

Virgie recollects, “Papa said it was an abomination what that woman did. That God would judge her” (p. 25). However, she refrains from judging and imagines the circumstances that might have driven the Well Woman to the deed. Where does Virgie’s compassion stem from?

Why doesn’t Sheriff Taylor inform the Moores that the baby was already dead as soon as he receives the inquest results?

If the woman and the baby had been black, do you feel that the investigation would have proceeded differently?

When Virgie and Tess check on Lola Lowe’s new baby, Lola immediately knows why they are there, and their schoolmate Ellen is clearly embarrassed to have them see her home. Did their attempts to solve the mystery do more harm than good? How pure were their motives?

After the stock market crash, Jesse Bridgeman, the banker, kills himself. Why do you think a person who—even after losing most of his money—still had more than most of the townspeople would commit suicide?

“Beans and onion. Squash and tomato. It was the different tastes together, the ones that it didn’t make no sense at all to stick on the same form, that your tongue really remembered” (p. 146). Are there any other examples in the novel when Phillips uses food as a metaphor? What do these metaphors tell us about the world she creates?

Would Tess and Jack have learned the lesson their father hoped to impart by taking them to pick cotton if they hadn’t encountered and become friends with the Talbert children?

Why doesn’t Albert sue the brick company after their truck driver hits Jack? Such a decision would be unfathomable today. What do you think has changed about our society? Is the change for better or worse?

What do you think about Jonah’s explanation of why he won’t have dinner at the Moores? Would you, like Albert, have capitulated? How did Jack’s accident affect Albert’s position

Jonah and Albert feel they can never be real friends because of their race. Have you ever had to disavow or stifle a friendship because of external social pressures?

Albert chooses to protect his family over fully expressing his friendship for Jonah. Do you think he made the right choice? What other choices do the characters in the book make that can be read as both good and bad?

Did Virgie and Tess do the right thing in keeping the Well Woman’s identity a secret? How might their lives have turned out differently if she hadn’t chosen their well?