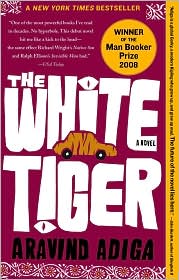 Introducing a major literary talent, The White Tiger offers a story of coruscating wit, blistering suspense, and questionable morality, told by the most volatile, captivating, and utterly inimitable narrator that this millennium has yet seen.

Balram Halwai is a complicated man. Servant. Philosopher. Entrepreneur. Murderer. Over the course of seven nights, by the scattered light of a preposterous chandelier, Balram tells us the terrible and transfixing story of how he came to be a success in life — having nothing but his own wits to help him along.

Born in the dark heart of India,

Introducing a major literary talent, The White Tiger offers a story of coruscating wit, blistering suspense, and questionable morality, told by the most volatile, captivating, and utterly inimitable narrator that this millennium has yet seen.

Balram Halwai is a complicated man. Servant. Philosopher. Entrepreneur. Murderer. Over the course of seven nights, by the scattered light of a preposterous chandelier, Balram tells us the terrible and transfixing story of how he came to be a success in life — having nothing but his own wits to help him along.

Born in the dark heart of India, Balram gets a break when he is hired as a driver for his village’s wealthiest man, two house Pomeranians (Puddles and Cuddles), and the rich man’s (very unlucky) son. From behind the wheel of their Honda City car, Balram’s new world is a revelation. While his peers flip through the pages of Murder Weekly (“Love — Rape — Revenge!”), barter for girls, drink liquor (Thunderbolt), and perpetuate the Great Rooster Coop of Indian society, Balram watches his employers bribe foreign ministers for tax breaks, barter for girls, drink liquor (single-malt whiskey), and play their own role in the Rooster Coop. Balram learns how to siphon gas, deal with corrupt mechanics, and refill and resell Johnnie Walker Black Label bottles (all but one). He also finds a way out of the Coop that no one else inside it can perceive.

Balram’s eyes penetrate India as few outsiders can: the cockroaches and the call centers; the prostitutes and the worshippers; the ancient and Internet cultures; the water buffalo and, trapped in so many kinds of cages that escape is (almost) impossible, the white tiger. And with a charisma as undeniable as it is unexpected, Balram teaches us that religion doesn’t create virtue, and money doesn’t solve every problem — but decency can still be found in a corrupt world, and you can get what you want out of life if you eavesdrop on the right conversations. Sold in sixteen countries around the world, The White Tiger recalls The Death of Vishnu and Bangkok 8 in ambition, scope, and narrative genius, with a mischief and personality all its own. Amoral, irreverent, deeply endearing, and utterly contemporary, this novel is an international publishing sensation — and a startling, provocative debut.

Aravind Adiga was born in India in 1974 and attended Columbia and Oxford universities. A former correspondent for Time magazine, he has also been published in the Financial Times. He lives in Mumbai, India.

“Compelling, angry, and darkly humorous, The White Tiger is an unexpected journey into a new India. Aravind Adiga is a talent to watch.”
—Mohsin Hamid, author of The Reluctant Fundamentalist

“This fast-moving novel, set in India, is being sold as a corrective to the glib, dreamy exoticism Western readers often get…If these are the hands that built India, their grandkids really are going to kick America’s ass…BUY IT.”
—New York Magazine

“Darkly comic…Balram’s appealingly sardonic voice and acute observations of the social order are both winning and unsettling.” —The New Yorker

The author chose to tell the story from the provocative point of view of an exceedingly charming, egotistical admitted murderer. Do Balram’s ambition and charisma make his vision clearer? More vivid? Did he win you over?

Why does Balram choose to address the Premier? What motivates him to tell his story? What similarities does he see between himself and the Premier?

Because of his lack of education, Ashok calls Balram “half-baked.” What does he mean by this? How does Balram go about educating himself? What does he learn?

Balram variously describes himself as “a man of action and change,” “a thinking man,” “an entrepreneur,” “a man who sees tomorrow,” and a “murderer.” Is any one of these labels the most fitting, or is he too complex for only one? How would you describe him?

Balram blames the culture of servitude in India for the stark contrasts between the Light and the Darkness and the antiquated mind set that slows change. Discuss his rooster coop analogy and the role of religion, the political system, and family life in perpetuating this culture. What do you make of the couplet Balram repeats to himself: “I was looking for the key for years / but the door was always open”?

Discuss Balram’s opinion of his master and how it and their relationship evolve. Balram says “where my genuine concern for him ended and where my self-interest began, I could not tell” (160). Where do you think his self-interest begins?

Discuss Balram’s reasons for the murder: fulfilling his father’s wish that his son “live like a man,” taking back what Ashok had stolen from him, and breaking out of the rooster coop, among them. Which ring true to you and which do not? Did you feel Balram was justified in killing Ashok? Discuss the paradox inherent in the fact that in order to live fully as a man, Balram took a man’s life.

Balram’s thoughts of his family initially hold him back from killing Ashok. What changes his mind? Why do you think he goes back to retrieve Dharam at the end of the novel? Does his decision absolve him in any way?

The novel offers a window into the rapidly changing economic situation in India. What do we learn about entrepreneurship and Balram’s definition of it?

The novel reveals an India that is as unforgiving as it is promising. Do you think of the novel, ultimately, as a cautionary tale or a hopeful one?