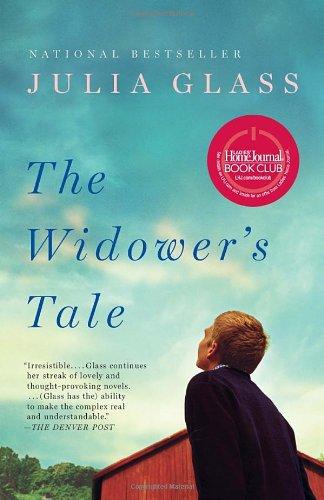 Seventy-year-old Percy Darling is settling happily into retirement: reading novels, watching old movies, and swimming naked in his pond. But his routines are disrupted when he is persuaded to let a locally beloved preschool take over his barn. As Percy sees his rural refuge overrun by children, parents, and teachers, he must reexamine the solitary life he has made in the three decades since the sudden death of his wife. With equal parts affection and humor, Julia Glass spins a captivating tale about a man who can no longer remain aloof from his community, his two grown daughters, or—to his great shock—the precarious joy of falling in love.

Seventy-year-old Percy Darling is settling happily into retirement: reading novels, watching old movies, and swimming naked in his pond. But his routines are disrupted when he is persuaded to let a locally beloved preschool take over his barn. As Percy sees his rural refuge overrun by children, parents, and teachers, he must reexamine the solitary life he has made in the three decades since the sudden death of his wife. With equal parts affection and humor, Julia Glass spins a captivating tale about a man who can no longer remain aloof from his community, his two grown daughters, or—to his great shock—the precarious joy of falling in love.

Julia Glass is the author of Three Junes, winner of the 2002 National Book Award for Fiction; The Whole World Over; and I See You Everywhere, winner of the 2009 Binghamton University John Gardner Book Award. She has received fellowships from the National Endowment for the Arts, the New York Foundation for the Arts, and the Radcliffe Institute for Advanced Study. Her short fiction has won several prizes, and her personal essays have been widely anthologized. She lives in Massachusetts with her family.

“Marvelous. . . . A delicate, nuanced, socially conscious story of one family’s near-destruction, and how a slew of seemingly bad moves reconnects it.” —USA Today

“An enchanting story of familial bonds and late-life romance. Expect to be infatuated with Glass’s protagonist … he of generous soul, dry wit, and courtly manners.” —O, The Oprah Magazine

“Tremendously engaging. . . . It’s a large, endearing cast, bursting with emotional and social issues, and Glass slips effortlessly between their individual and enmeshed dramas. As she well proved in her National Book Award-winning Three Junes, Glass crafts dense and absorbing reads that are as charming as they are provocative.” —Entertainment Weekly

From the stories that the characters remember and tell, what kind of mother (and wife) was Poppy Darling? How would you explain the very different kinds of mothers her two daughters, Trudy and Clover, have become? Discuss the choices these two women have made and how they affect their relationships with their children. And how about Sarah? What kind of mother is she? Does being a mother define any or all of these women?

How do Percy’s age, background, and profession shape the way he thinks about the world around him? How does the way he sees himself differ from the way other characters see him? How has being a single father and now an involved grandfather defined him? How do you think he would have been a different father and man had Poppy lived?

By the end of the novel, how has Percy changed/evolved?

Why do you think Percy chose to avoid romantic or sexual involvement for so many years after Poppy’s death? Is it habit and routine, nostalgia and commitment to his wife, or guilt over her death; or a combination of all three? Why do you think he falls so suddenly for Sarah after all that time alone? Why now?

The novel takes place over the course of a year, with chapters varying from Percy’s point of view (looking back from the end of that year) to those of Celestino, Robert, and Ira. Why do you think Julia Glass chose to narrate only Percy’s chapters in a first-person voice, the rest in the third person? (Does this make you think of the way she handled voice in her previous books?) And why do you think, when there are so many important female characters in this novel, that she chose to tell the story only through the eyes of men?

What do you think of the allusion in this book’s title to Chaucer’s Canterbury Tales?

This is a novel about family, the intricacies of the intertwining relationships among parents and children, grandparents and grandchildren, siblings and cousins, in-laws and girlfriends. Discuss and compare some of the central familial relationships here (particularly those between Percy and the various members of his extended clan). Do any of these relationships ring particularly true to your own family experiences? Which ones fascinate or move you the most?

Celestino is an outsider and a loner—in the eyes of the law, an illegal alien—who was brought to the United States by a stroke of good fortune, only to lose his favored status and end up in a precarious situation with little money and no close friends. Discuss the circumstances that bring him into Percy’s circle and the way in which he becomes so important in Robert’s and Percy’s lives? What destiny do you imagine for him beyond the end of the novel?

Discuss Celestino and Isabelle’s teenage relationship as compared with the way they view each other once they are reunited as adults. Do you think that it would have worked out differently under other circumstances, or do culture and class sometimes present insurmountable obstacles? Compare Celestino and Isabelle’s youthful relationship with the one between Robert and Clara.

What do you think of Robert’s relationship with his mother? Talk about the way he sees her in the college essay he wrote versus the way he sees her after the argument they have in the car the night before Thanksgiving and Robert finds out about the sibling he almost had. How is Robert’s intimate view of Trudy, as her son and only child, different from Percy’s fatherly view of Trudy as one of two daughters? Compare Robert’s and Percy’s different visions of her professional life: Robert’s summer working in the chemo clinic versus Percy’s first visit to the hospital when he seeks Trudy’s advice about Sarah. Is there a generational difference to the way they encounter the world of modern medicine?

What about Percy’s relationship with Clover? What do you think about his “sacrifice” of the barn to help her out? Is it entirely altruistic? What are the unintended consequences to their love for each other? Why does Clover resent her father and betray both him and her nephew, Robert, at the end of the novel?

Why does Robert, the good student and good son, allow himself to become involved in Arturo’s “missions”? Discuss Robert’s friendship with Arturo and why Arturo is so appealing to Robert. What do you think of the observation that Turo is “of everywhere and nowhere?”

What do you think about Turo’s activist group, the DOGS, and their acts of eco-vandalism? Do you agree with Turo that conservation efforts like recycling and organic lawn care aren’t “dramatic enough to make a dent” (p. 172) in society’s lazy, consumerist ways—that true change will come about only through extremism?

Discuss the importance of the tree house in the novel. What does it represent, if anything, to each of the four main characters?

What do you think of Ira and his relationship with Anthony? How have Ira’s fears influenced his relationships in general? How do you imagine the crisis at the end of the book has changed him, if at all?

Homes often seem like characters in Julia Glass novels; compare Percy’s house with key houses in her other novels, if you’ve read them (e.g., Tealing, Fenno McLeod’s childhood house in Three Junes; Uncle Marsden’s run-down seaside mansion in The Whole World Over). Describe Percy’s house and its significance to various members of the Darling family. Discuss its tie to the neighboring house and the revelation at the end about the two brothers who built the houses. Why is this important?

How have libraries changed over the course of Percy’s working life, through his youth, his daughters’ youth, and now Robert’s youth? Percy doesn’t seem to approve of the direction libraries are going and the way in which society regards books. Do you?

“‘Daughters.’ This word meant everything to me in that moment: sun, moon, stars, blood, water (oh curse the water!), meat, potatoes, wine, shoes, books, the floor beneath my feet, the roof over my head” (p. 125). Compare and contrast Percy’s two daughters.

Why is Sarah so evasive and even hostile when Percy confronts her about the lump in her breast—and even after she starts cancer treatment with Trudy? What do you think about her decision to marry her ex-boyfriend when he offers her the lifeline of his health insurance—and to keep this a secret from Percy? What does it say about Sarah and her feelings for Percy? Do you think the relationship, at the end of the book, is salvageable in any form?

How is The Widower’s Tale both a tale of our time and a story specific to its place, to New England?