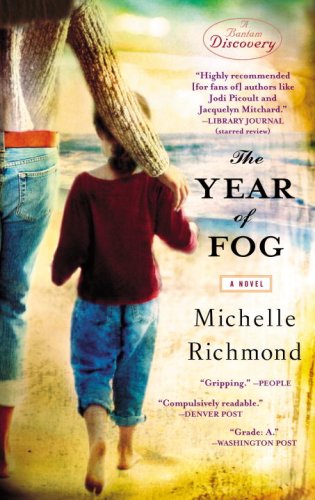 THE YEAR OF FOG

Life changes in an instant. On a foggy beach. In the seconds when Abby Mason—photographer, fiancée soon-to-be-stepmother—looks into her camera and commits her greatest error. Heartbreaking, uplifting, and beautifully told, here is the riveting tale of a family torn apart, of the search for the truth behind a child’s disappearance, and of one woman’s unwavering faith in the redemptive power of love—all made startlingly fresh through Michelle Richmond’s incandescent sensitivity and extraordinary insight.

Six-year-old Emma vanished into the thick San Francisco fog. Or into the heaving Pacific. Or somewhere just beyond: to a parking lot,

Life changes in an instant. On a foggy beach. In the seconds when Abby Mason—photographer, fiancée soon-to-be-stepmother—looks into her camera and commits her greatest error. Heartbreaking, uplifting, and beautifully told, here is the riveting tale of a family torn apart, of the search for the truth behind a child’s disappearance, and of one woman’s unwavering faith in the redemptive power of love—all made startlingly fresh through Michelle Richmond’s incandescent sensitivity and extraordinary insight.

Six-year-old Emma vanished into the thick San Francisco fog. Or into the heaving Pacific. Or somewhere just beyond: to a parking lot, a stranger’s van, or a road with traffic flashing by. Devastated by guilt, haunted by her fears about becoming a stepmother, Abby refuses to believe that Emma is dead. And so she searches for clues about what happened that morning—and cannot stop the flood of memories reaching from her own childhood to illuminate that irreversible moment on the beach.

Now, as the days drag into weeks, as the police lose interest and fliers fade on telephone poles, Emma’s father finds solace in religion and scientific probability—but Abby can only wander the beaches and city streets, attempting to recover the past and the little girl she lost. With her life at a crossroads, she will leave San Francisco for a country thousands of miles away. And there, by the side of another sea, on a journey that has led her to another man and into a strange subculture of wanderers and surfers, Abby will make the most astounding discovery of all—as the truth of Emma’s disappearance unravels with stunning force.

A profoundly original novel of family, loss, and hope—of the choices we make and the choices made for us—The Year of Fog beguiles with the mysteries of time and memory even as it lays bare the deep and wondrous workings of the human heart. The result is a mesmerizing tour de force that will touch anyone who knows what it means to love a child.

Michelle Richmond is the author of the novel Dream of the Blue Room and a story collection which won the Associated Writing Programs Award. She is also the recipient of the 2006 Mississippi Review Prize. A native of Mobile, Alabama, Michelle lives with her husband and son in San Francisco, where she teaches creative writing and serves on the advisory board of the Christopher Isherwood Foundation. No One You Know is her next novel, which Delacorte will publish in July 2008.

“Richmond gracefully explores the nature of memory and perception in key passages that never slow the suspense of the search. Closely echoing Jacquelyn Mitchard’s best-selling Deep End of the Ocean (1996), this is a page-turner with a philosophical bent.” —Booklist

“Involving, heart-rending and immediately readable…Richmond captures the spirit of life in The City.” —The San Francisco Examiner

“A mesmerizing novel of loss and grief, hope and redemption, and the endurance of love.”
—Library Journal, Starred Review

The Year of Fog unfolds as a series of flashbacks and present-tense scenes. How do Abby’s impressions of her own past shift as she searches for Emma? What does her research on the neuroscience of memory tell us about the limits and the power of the mind’s imagery?

How much was Emma a factor in Abby’s relationship with Jake? After Emma’s disappearance, what did they discover about each other? Why was it awkward for Abby to see Jake turn to religion? Why was he skeptical of her insistence that Emma didn’t drown but was kidnapped?

Are Ramon and Jake entirely different, or was there a common thread that attracted Abby to each of them? What keeps her from sleeping with Nick in chapter 40? What has she needed from men in general at crucial points in her life?

How did Abby’s recollections of her own mother affect her approach to being a stepmother?

Describing the ancient history of memory studies in chapter 43, Abby mentions the concept of Renaissance “memory theaters” and later has a dream in which her memories are displayed in ways she cannot fully comprehend. If your past were to be categorized in such a way, what would it look like? Which objects would best represent various events? Which of your memories would you most like to preserve?

Abby struggles with feelings of inadequacy, seeing herself as the sister who often botches her chances at a happier life. What accounts for the tremendous differences between her self-perception and Annabel’s?

How would you describe Lisbeth’s wavering, extreme motivations? What would explain her dangerous decisions? How is she able to appear trustworthy?

For Abby, one of the most difficult aspects of the search is the fact that she doesn’t receive full respect as a key figure in Emma’s life. Ultimately, how do you define “a devoted mother”? What are the best examples of good parenting in the novel? What determines whether someone has what it takes to be a good parent?

What enabled Abby to uncover the truth while Jake could not? Was it her intuition? Determination? Hypnosis? Fate? Or simply the deep guilt she felt? What ultimately caused the fog to lift in Emma’s disappearance?

In many ways, the novel is a poignant portrait of coping with grief, in this case a very unresolved form of grief. What is the best way to confront tragedy?

How did you attempt to solve the mystery of Emma’s disappearance? Were you able to hold out hope for her survival?

Goofy’s help leads Abby to the sojourn in Costa Rica. What do both beach communities begin to mean to her? In what way does the landscape, both liberating and treacherous, form an appropriate place for her to come to terms with her greatest fears?

What is distinct about Abby’s storytelling voice? How might the novel have unfolded had it been told from Jake’s point of view?

What did the novel reveal to you about the world of missing children and their families? Did it change your perspective on the real-life cases you encounter in the media?

As you saw Abby catch a wave in the final paragraph, what did you predict for her future?