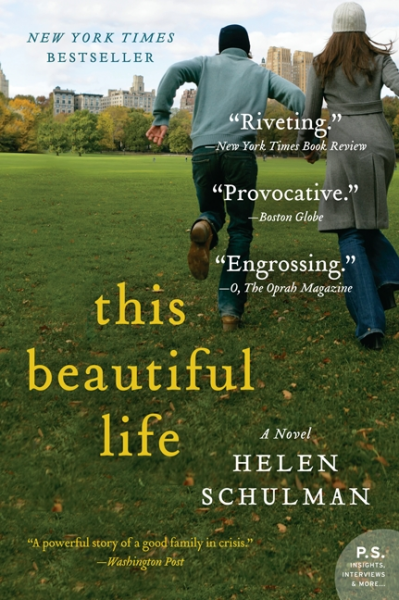 When fifteen-year-old Jake Bergamot receives—and then forwards to a friend—a sexually explicit video that an eighth-grade admirer sent to him, the video goes viral within hours. The scandal that ensues threatens to shatter his family’s sense of security and identity—and, ultimately, their happiness. This Beautiful Life is a devastating, clear-eyed portrait of modern life that will have readers debating their assumptions about family, morality, and the choices we make in the name of love.

When fifteen-year-old Jake Bergamot receives—and then forwards to a friend—a sexually explicit video that an eighth-grade admirer sent to him, the video goes viral within hours. The scandal that ensues threatens to shatter his family’s sense of security and identity—and, ultimately, their happiness. This Beautiful Life is a devastating, clear-eyed portrait of modern life that will have readers debating their assumptions about family, morality, and the choices we make in the name of love.

Helen Schulman is the author of the novels A Day at the Beach, P.S., The Revisionist, and Out of Time, as well as the short story collection Not a Free Show. An associate professor of writing at The New School, she lives in New York City.

“Riveting. . . . As much as this book fiercely inhabits our shared online reality, it operates most powerfully on a deeper level, posing an enduring question about American values.”—Maria Russo, New York Times Book Review

“As wry and entertaining as Schulman’s social observations are, it’s the totally convincing nightmare aspect of her novel that will keep parental readers up at night.”—Maureen Corrigan, NPR‘s “Fresh Air”

“I read this book with white-knuckled urgency, and I finished it in tears. Helen Schulman is an absolutely brilliant novelist.”—Elizabeth Gilbert, author of Committed and Eat, Pray, Love

What are your impressions of the Bergamot family? How do Liz and Richard’s backgrounds influence how they view the good fortune of their lives?

Do you think Liz and Richard are good parents? Liz believes she’s not better or worse than other mothers. Do you agree with her? What makes a good parent? Does she love her son “too much”—“crippling in its way” as she calls it? Explain what she means.

At the beginning of the novel, Liz and Coco are at the Plaza for a sleepover. How do the events at the sleepover and Liz’s observations about the soon-to-close hotel foreshadow what follows?

What was the Bergamot family’s life like before they moved to New York City? Might the same situation have occurred if they had remained in Ithaca? How much does the urban milieu—and the moneyed world they are a part of—influence the behaviors of both parents and students, especially the Bergamots?

When it comes to girls and sex, Jake is a typically confused teen. “His Mom was always saying don’t take advantage of a girl, but what if a girl wanted to be taken advantage of?” How would you answer him?

Why does Jake forward the video Daisy sends him? How do his peers react when it goes viral? How did they view Daisy and Jake? What about the other parents? Is there a clear-cut villain and victim?

Compare the two girls at the center of Jake’s consciousness, Audrey and Daisy. What do you think the future holds for them? What have they learned from the events that pass? What about Jake? And what about his precocious and popular five-year-old sister, Coco?

In the midst of the crisis, Jake is reading The Great Gatsby for school. How do the themes of F. Scott Fitzgerald’s novel reverberate in This Beautiful Life? What does Jake take away from reading the novel in light of his own situation?

Think about the Bergamot’s reaction to the scandal. Do you agree with their actions? Could they have made different choices? What might you do if your child was either Daisy or Jake? What is the proper punishment for their behaviors? How much of Richard’s reaction is related to concern over his job and career?

Early in the novel, Liz reveals her feelings about home and family. “It was what Liz always hungered after despite generations of contrary evidence: Relatives as respite, home as haven, a retreat from the rest of the dangerous, damaging world.” How does the shelter of family and home crumble after Jake’s indiscretion? Could the damage have been prevented?

How did the event change how Liz and Richard see themselves and each other? Are they both responsible for what follows? Why can’t Liz maintain their “beautiful life” anymore?

While the events in This Beautiful Life are fictional, similar cases have made headlines around the country. What does the novel say about our society? How has the Internet affected our behavior, especially that of adolescents? The author sets the book in 2003; how might the outcome have been different had the narrative taken place a decade later?

What are your thoughts on the novel’s ending?