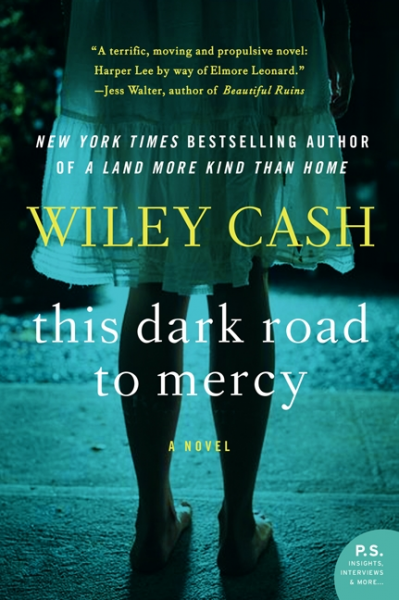 THIS DARK ROAD TO MERCY

The critically acclaimed author of the New York Times bestseller A Land More Kind Than Home—hailed as “a powerfully moving debut that reads as if Cormac McCarthy decided to rewrite Harper Lee's To Kill a Mockingbird” (Richmond Times Dispatch)—returns with a resonant novel of love and atonement, blood and vengeance, set in western North Carolina, involving two young sisters, a wayward father, and an enemy determined to see him pay for his sins.

After their mother's unexpected death, twelve-year-old Easter and her six-year-old sister Ruby are adjusting to life in foster care when their errant father,

The critically acclaimed author of the New York Times bestseller A Land More Kind Than Home—hailed as “a powerfully moving debut that reads as if Cormac McCarthy decided to rewrite Harper Lee's To Kill a Mockingbird” (Richmond Times Dispatch)—returns with a resonant novel of love and atonement, blood and vengeance, set in western North Carolina, involving two young sisters, a wayward father, and an enemy determined to see him pay for his sins.

After their mother's unexpected death, twelve-year-old Easter and her six-year-old sister Ruby are adjusting to life in foster care when their errant father, Wade, suddenly appears. Since Wade signed away his legal rights, the only way he can get his daughters back is to steal them away in the night.

Brady Weller, the girls' court-appointed guardian, begins looking for Wade, and he quickly turns up unsettling information linking Wade to a recent armored car heist, one with a whopping $14.5 million missing. But Brady Weller isn't the only one hunting the desperate father. Robert Pruitt, a shady and mercurial man nursing a years-old vendetta, is also determined to find Wade and claim his due.

Narrated by a trio of alternating voices, This Dark Road to Mercy is a story about the indelible power of family and the primal desire to outrun a past that refuses to let go.

Wiley Cash is the award-winning and New York Times bestselling author of A Land More Kind Than Home. A native of North Carolina, he has held residency positions at Yaddo and The MacDowell Colony and teaches in the low-residency MFA program at Southern New Hampshire University. He and his wife live in Wilmington, North Carolina.

“Cash follows his evocative debut with another striking take on Southern literature. . . . In the rhythms and cadence of the South, Cash offers a tale about family and about the tenuous link among the right choices, living with consequences or seeking redemption.” —Kirkus Reviews

“The voice is Southern and oh so charming in This Dark Road to Mercy, a crime novel that’s also a road movie and a baseball tale and a wicked twist on Sixth-Grade Father-Daughter Night.” —New York Times Book Review

In This Dark Road to Mercy, people are not always what they seem, and assumptions are sometimes proven wrong. Easter, for example, may be a kid, but she's incredibly smart and mature for her age as evidenced from the very first page of the novel. What assumptions does Easter make about Wade, based on her mother's stories and her fragmented memories? Do you think she was right about him? Why or why not? Who else has suffered because of assumptions made about them by others?

Wade makes two remarks to Easter regarding their skin color (white) versus that of their schoolmates (black) during their first meeting in the book. Later on, Wade unthinkingly buys the girls an inflatable raft decorated with the Confederate flag. Discuss the subtle themes of race, class, and other social factors running through this novel. How important to the story is it that the main

characters are underprivileged or otherwise struggling financially? How might the story have been different if the characters were middle class, or even wealthy?

When Easter discovers her mother unconscious and on drugs, she decides not to call 911, but to let her mother sleep it off. Why? Identify other moments in the novel where Easter decides to do something other than the more obvious or expected thing. What effect does this have on your opinion of her? 4. Marcus accuses Easter of not wanting anyone to know about their relationship. He seems to be hinting that it's because he is black and she is white. Do you think he's right? Why or why not? Why else might Easter have wanted to keep her feelings about Marcus private?

Though we don't yet know his motivations, we are introduced to Wade when he first contacts Easter on the schoolyard after school one day. Later she overhears him talking to Miss Crawford about trying to get the girls back. He claims he was tricked into signing away his parental rights and says, “I know how the law works, and I know it never works for people like me.” What does he mean by this? Do you feel sympathetic toward Wade? Use examples from the novel to illustrate your opinion.

Wade and the girls are on the run for most of the novel. Identify what, and whom, they are running from and discuss how other characters are similarly “on the run,” either literally or metaphorically.

Easter often seems fearless. When Pruitt first approaches her on the edge of the schoolyard, she instinctively denies her name and pretends not to know Wade at the same time that she understands instinctively that Pruitt is trying to scare her. Describe how she balances some fears, such as she feels walking away from Pruitt, against other things she might fear. What frightens Easter the most?

On page 2, Easter describes Ruby as looking just like their mother, while she (Easter) looks like Wade. How does Easter feel about this? Why does it mean so much to her when she and Wade dye their hair and, with their suntans, “finally looked like a family” (p. 125)? What, in the end, finally makes Easter feel comfortable with her natural coloring?

Wade tells Easter, “I wanted to be a good dad, but I screwed that up, too.” (P. 136) Brady Weller could just as easily have delivered this line. Why do you think the author chose to make Brady one of the narrative voices in this novel? Identify the parallels between him and Wade and between each man and their children.

A running thread through the novel is the competition between baseball greats Sammy Sosa and Mark McGwire, each of whom are trying to break the homerun record set by Roger Maris in 1961. How does this competition relate to the main plot of the novel? Why do you think Easter and Ruby are such fans of Sosa's? Discuss the significance of the baseball game in St. Louis where the story comes to a c limax.

As Brady zeroes in on Wade's and the Quillby girls' location, he asks his daughter Jessica, “Would you let them stay with their dad, or would you follow the law and make sure they get back where they're supposed to be?” (p. 146). Jessica answers, “I don't know'I'm not a dad.” Do you think she's suggesting that Brady think like a father and not like a cop or guardian? Discuss how these two philosophical positions might differ with regard to the situations presented in the novel.

When does Easter first begin to think that maybe Wade isn't such a bad person after all? Do you think people can really change? Did Wade? If so, why do you think he abandons the girls at the stadium? Is it more for their sake, or his own?

Over dinner, Jessica points out to Brady that no one ever asks kids what they want and what would make them happy. What do you think about this observation? Is there wisdom in asking young children what they want when it comes to guardianship? Is there an inherent danger in relying on their opinion? Do you think Brady ultimately made the right choice in trying to trap Wade? What would you have done? Do you think the girls are happy in the end?