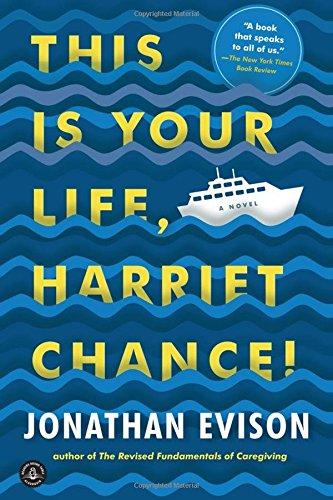 THIS IS YOUR LIFE, HARRIET CHANCE!

“Jonathan Evison is a ridiculously gifted storyteller: racing, breathless, and vibrant with his prose, hungry for personal truths, and clearly in love with the world around us all. That compassion and those writerly charms are deeply felt in This Is Your Life, Harriet Chance!, an irresistible, inventive novel full of important ideas about how we live our lives as parents, children, partners, and human beings.” —Jami Attenberg, author of The Middlesteins

With Bernard, her husband of fifty-five years, now in the grave, seventy-eight-year-old Harriet Chance impulsively sets sail on an ill-conceived Alaskan cruise that her late husband had planned.

“Jonathan Evison is a ridiculously gifted storyteller: racing, breathless, and vibrant with his prose, hungry for personal truths, and clearly in love with the world around us all. That compassion and those writerly charms are deeply felt in This Is Your Life, Harriet Chance!, an irresistible, inventive novel full of important ideas about how we live our lives as parents, children, partners, and human beings.” —Jami Attenberg, author of The Middlesteins

With Bernard, her husband of fifty-five years, now in the grave, seventy-eight-year-old Harriet Chance impulsively sets sail on an ill-conceived Alaskan cruise that her late husband had planned. But what she hoped would be a voyage leading to a new lease on life becomes a surprising and revelatory journey into Harriet’s past.

There, amid the overwhelming buffets and the incessant lounge singers, between the imagined appearances of her late husband and the very real arrival of her estranged daughter midway through the cruise, Harriet is forced to take a long look back, confronting the truth about pivotal events that changed the course of her life. And in the process she discovers that she’s been living the better part of that life under entirely false assumptions.

In This Is Your Life, Harriet Chance! Jonathan Evison has crafted a bighearted novel with an endearing heroine at the helm. Through Harriet, he paints a bittersweet portrait of a postmodern everywoman, her story told with great warmth, humanity, and humor. Part dysfunctional love story, part poignant exploration of the mother-daughter relationship, nothing is what it seems in this tale of acceptance, reexamination, and forgiveness.

Jonathan Evison lives on an island on the coast of Washington State. He is the New York Times bestselling Author of three award winning novels: All About Lulu, West of Here, and The Revised Fundamentals of Caregiving, soon to be a major motion picture. Sherman Alexie has called Evison “the most honest white man alive.” He has written for The New York Times, Wall Street Journal, Washington Post, Salon, and National Public Radio. His fourth novel, This Is Your Life, Harriet Chance!, was released in September 2015.

“Intricately structured… Evison resists every neat resolution, every unearned epiphany. And as fanciful as his prose can be…he’s not afraid to depict the dark side of aging as it is, and not as we wish it were…. The result is a book that speaks to all of us, whether we’re young enough to check Facebook 50 times a day, or old enough only to have a vague idea what the Internet is. The themes Evison presents – disappointment, delusion, redemption – are universal, and he deals with them beautifully in this wonderful novel. This is your life, Harriet Chance, but it’s ours, too.”—New York Times Book Review

“Slowly, and with admirable, dark precision, Evison lays Harriet bare. The lies, the dodges, the secrets and frustrated desires. This is where the voice serves him. With a touch of snark and a lashing of perfectly affected irony, he flenses her to the bone and, somehow, seems kind in doing it. Comforting, even…And with Harriet Chance — poor, frustrated, flummoxed Harriet — Evison has found his ideal foil.”—NPR Books

“Jonathan Evison charms with This is Your Life, Harriet Chance!”—Vanity Fair

“Evison’s rollicking novel is a close-up up of the life of 78-year-old Harriet Chance, whose Alaskan cruise highlights include indulging in endless seafood buffets, acquiring touristy tribal knickknackery, and discovering the secret of her deceased husband’s decades-long affair with her best friend.” —O, The Oprah Magazine

In telling the story of Harriet Chance’s life, the author has used a distinctive nonlinear structure. Why do you think the author chose such an unusual way to tell the story? Do you feel that it strengthens the story’s impact? Why or why not?

In a starred review of This Is Your Life, Harriet Chance!, a critic says that “it’s not often that a male writer gets inside the head of a female character without botching it somehow,” and then adds that in this novel Jonathan Evison succeeds. Do you agree or disagree?

In the first draft of his novel, Evison told Harriet’s story in a straightforward, third-person omniscient narrative. The second-person you-are-there voice was added during revision. How did the point of view affect your enjoyment of the novel? Do you think the author made the right choice?

Who do you think the voice of the This Is Your Life narrative portion of the novel belongs to? What can you point to in support of your conclusion?

Harriet Chance seems to have been created as a kind of “everywoman,” reflecting real strength as well as common human foibles. What are some of her strengths, and what are some of her weaknesses? Do you feel that by the end of the novel, she has come to understand some of these aspects of herself?

Harriet’s late husband, Bernard, keeps appearing to her throughout the novel. Do you see these appearances as being “real,” or are they figments of Harriet’s imagination? After reading the scenes in which Harriet and Bernard discuss their lives together, did you have a clearer understanding of the dynamic that kept them a couple for so many years? What else did you learn through these scenes?

When Caroline joins Harriet on the Alaskan cruise, Harriet is forced to deal with some of the mother-daughter issues that she has avoided for years. Why do you think Harriet was not a more caring mother? Was Caroline culpable as well? What do you feel is the dynamic between the two women by the end of the novel?

Memory plays a very large part in Harriet’s story. In fact, all of the novel’s characters seem to be haunted by memories, some good, others not so good. Do you think that Harriet’s memories are a burden to her, or do you think she finds strength in them? What do you think is the significance of Bernard’s loss of memory in setting Harriet’s adventure in motion?

At the end of the novel, Evison writes that “our lives are more sinew than bone” (page 293), meaning that our lives are made up less by the direction we have taken than by the accumulation of memories and associations and yearnings that have held it together. Do you agree? How do you view this in relation to Harriet’s life?

Why are the past, present, and future important in the telling of Harriet's life story? Can we learn to visualize our own futures by analyzing ourselves in a similar way? Would you be honest with yourself? Or would you bury your secrets? Do you think you have a window to your future the way Harriet does?

How do you interpret the end of the novel? Do you see it as the end of Harriet’s life, or is it the start of another adventure? Explain your reaction.