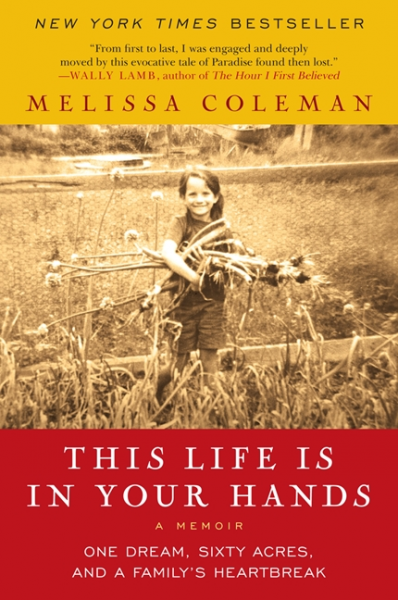 THIS LIFE IS IN YOUR HANDS

One Dream, Sixty Acres, and a Family's Heartbreak

In the fall of 1968, Melissa Coleman’s parents pack their VW truck and set out to forge a new existence on a rugged coastal homestead. Inspired by Helen and Scott Nearing, authors of the homesteading bible Living the Good Life, Eliot and Sue build their own home by hand, live off the crops they grow, and establish a happy family with Melissa and her two sisters. They also attract national media and become icons of the back-to-the-land farming movement, but the pursuit of a purer, simpler life comes at a price. In the wake of a tragic accident,

In the fall of 1968, Melissa Coleman’s parents pack their VW truck and set out to forge a new existence on a rugged coastal homestead. Inspired by Helen and Scott Nearing, authors of the homesteading bible Living the Good Life, Eliot and Sue build their own home by hand, live off the crops they grow, and establish a happy family with Melissa and her two sisters. They also attract national media and become icons of the back-to-the-land farming movement, but the pursuit of a purer, simpler life comes at a price. In the wake of a tragic accident, idealism gives way to human frailty, and by the fall of 1978, Greenwood Farm is abandoned. The search to understand what happened is at the heart of this luminous, heartbreaking, and ultimately redemptive memoir.

As a freelance writer, Melissa Coleman has covered lifestyle, health, and travel. She lives in Freeport, Maine, with her husband and twin daughters.

“Intense readability…. haunting power…. as well as lush, vivid atmosphere that is alluring in its own right…. [A] story so nuanced that it would be a disservice to reveal what was in store. If you want to know what happened, read it for yourself.”—Janet Maslin, New York Times

“The Colemans and the Nearings . . . worked hard to create an alternative economy that is still growing in rural America. This memoir is evidence of their great sacrifices.”—Los Angeles Times

“[This Life Is In Your Hands] is a rare breed of book-a memoir that justifies its own existence; that feels like it needs to exist. What Coleman does so well here is break down a deeply seated myth about giving up the luxuries of city life and returning to the land. . . . Coleman shows that without the essential ingredient of heart, any family-no matter how perfect and revolutionary it seems-is in danger of experiencing real loss.”—NPR.org

What does the title of the memoir refer to? Whose life is at stake?

The author’s parents, Eliot and Sue, were inspired by the book Living the Good Life, written by Scott and Helen Nearing: “Their philosophy held the promise of a simple life, far removed from the troubles of the modern world. The good life.” How did that philosophy hold true for Melissa Coleman and her family? How did it fail them?

How would you define “the good life”? Do you think it can ever be achieved? Did Melissa’s family find it in the years they lived in the Maine woods? What factors led to the end of their dream?

At the end of the prologue, Melissa Coleman writes, “I’m seeking—the secret of how to live.” Do you think she finds it by the memoir’s end? What insights would you offer someone on a similar quest?

Compare the America of the late sixties and early seventies to the state of the country today. How are the two periods similar? Was the “back to the land” lifestyle truly feasible forty years ago? What about today? How can we adapt Eliot’s philosophy to our modern lifestyle without heading to the woods?

What type of people were drawn to the lifestyle back then and why? What about today? What do you think of the “back to the land” ideal? What benefits does this kind of life offer? What are its drawbacks? Describe the people who arrived at the Nearings’ and later, at the farm with Sue and Eliot. What effect did these apprentices have on Greenwood Farm and its family?

Melissa Coleman writes, “Small drops, we see, like raindrops on stone, can eventually change the course of a river. These small forces, too, can change the path of a life.” What are the forces she is referring to in This Life Is in Your Hands? Using examples from the book, trace the “small drops” that changed the course of her young life.

People like Scott and Helen Nearing and Eliot and Sue Coleman are often mocked and looked upon with suspicion by more traditional-minded people. Why? What is it about them that threatens those who adhere to the status quo? What have we learned from these people who were then called “kooks” and “hippies”?

Describe Eliot and Sue’s parenting style. How did their outlook color Melissa’s own? Did she and Heidi have too much freedom?

In 1973, Congress passed the Farm Bill championed by then Secretary of Agriculture Dr. Earl Butz. How did this legislation affect American farming and the food we eat? Contrast those changes with Eliot’s ideas and beliefs.

In talking about God, Melissa Coleman quotes her mother: ” ‘Even though we do not belong to any organized religion, we are very religious people. We believe in the individual who can be trusted, who is capable of loving, who can carry his own weight and who had a basic goodness.’ ” Did Melissa’s parents live up to their own beliefs? Did they have too much faith in themselves, their way of life, and the righteousness of their cause?

What was Telonferdie? Explain its significance to Heidi and Melissa.

Does Melissa treat her parents differently in the memoir? What are your impressions of her father, Eliot, and her mother, Sue? Do you understand their motives and their actions even if you may not agree with them?

Was anyone or anything to blame for Heidi’s death?

At the memoir’s end, the author quotes T. S. Eliot. ” ‘This is the use of memory,’ Eliot also said. ‘For liberation—From the future as well as the past.’ ” What does he mean by this? How can memory liberate us? Why do so many people struggle to forget difficult events?

What did you take away from reading This Life Is in Your Hands?